FEBRUARY 2, 2014. A date to remember for every American football lover. I’m talking about one of the biggest days of the sporting year: SUPER BOWL XLVIII!

Super Bowl XLVIII will be the ultimate game of the American Football calendar, two great teams will battle it out to reign supreme NFL champions. The highly anticipated game between the American Football Conference (AFC) champions, the Denver Broncos and National Football Conference (NFC) champions the Seattle Seahawks is going to decide who is going to be the 2013 season champions. In other words the top offensive team, the Broncos  versus the top defence of the Seahawks; something that we haven’t seen since Super Bowl XXXVII. The host venue will be the spectacular MetLife Stadium at the Meadowlands Sports Complex in East Rutherford, New Jersey with the kick off time scheduled to be 6:25pm EST.

Why is SUPER BOWL XLVIII so special and different from the previous games?

It is going to be the first ever Super Bowl to be played outdoors and it will be very  interesting to see just how well the players cope with freezing temperatures. Without doubt we have been experiencing one of the harshest winters in living memory. Another very interesting statistic is that it’s going to be the first time where two US states will share hosting duties with the game to be played on artificial turf, specifically Field Turf, something we haven’t seen since Super Bowl X at the Miami Orange Bowl. With an estimated $4 million per 30 seconds TV advertising rate, we should prepare for a spectacular ‘clash of Titans’ that will leave people across the country and the world, confined to their seats for the entire game! Let’s hope that the best team wins and that we get to enjoy a great game that will go down in history!

Ideal movie warm up for the Super Bowl: 3 best football movies to watch!

A great way to warm up for one of the biggest TV sports events of this year is to kick back with a great football themed movie. Why not spend a few of these freezing nights before the big event, in the comfort of your home with friends and family watching perhaps the 3 best football movies ever produced. Indulge in your love for American football stuff delicious pizza and beer while socializing with your loved ones. 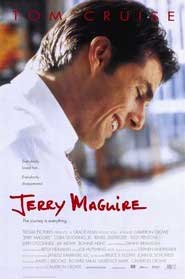 Jerry Maguire is probably the top choice when it comes to American football/Romance crossover movies. The movie received very positive critiques for the serious and inspirational acting of Tom Cruise, Cuba Gooding Jr., and Renée Zellweger. The well structured plot and the superior acting proved to be key factors for the movie becoming a huge success across the theatres of the world. It managed to bring in more than $270 million (a great investment return considering the cost was around $50 million) and receive serious award wins and nominations. We can all agree that investing into football movies is probably a good choice.

The Plot: Jerry Maguire (Tom Cruise) is a successful sports agent. He lives the absolute American dream; great clients, success, money, sex, fame. He has it all. Everything looks so ideally structured, just the way that almost anyone would love. But is this a life that is worth living or is it just an illusion of happiness?

Based on these questions Jerry decides to leave this world of ‘fake beliefs’ and make his personal revolution. After challenging the status quo and being challenged, Jerry gets stripped of the luxuries and high earning clients; all except the egocentric football player Rod Tidwell (Cuba Gooding Jr.) who is believed to be a ‘lost case’. With the odds stacked against him, will he manage to prove that being different and believing in ideas and dreams is stronger than the cut-throat world of sport management? In this game of trying to find out who he really is, Dorothy Boyd (Renée Zellweger) will become his mentor. His quest is to find and understand something more important than money and status…true love and real happiness. 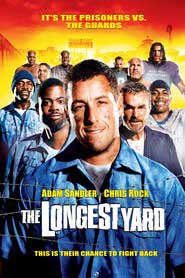 So you want a comedy and American Football movie? Then the comic remake of The Longest Yard (original 1974), is your perfect choice. An ideal movie for the whole family (kids over 13), but also for those who love comedies and American football.

No wonder why this comedy was a great block buster, earning a well respected $190 million, a nice return on the $82 million it cost to produce.

From the very beginning you will simply love this movie! Compared to the original, it could be said that it is a lot better, since it offers loads of very funny moments and should appeal to a wider audience.

The Plot: Paul “Wrecking” Crewe (Adam Sandler) was a revered football superstar back in his day, but as often happens with fame and glory, those days have long since passed. A drunk-driving incident is the reason why Paul gets handed some jail time. There, Warden Hazen (James Cromwell), requests for him to assemble a football team of convicts to play a team of notorious guards. The assortment of convicts are your classic underdogs really up against it facing the spotless and superior team of guards.

The prisoners assembled to play could easily represent real life characters in society. The football game is the medium where different classes and idiosyncrasies join their forces or challenge one another. Despite being a very humorous comedy as is characteristic of Adam Sandler movies, it is also a movie where someone can find a character representing themselves. Definitely a great choice to watch and laugh your way through while at the same time subconsciously think of life. Nothing stays the same…everything changes…but we have the power to form our own destiny! 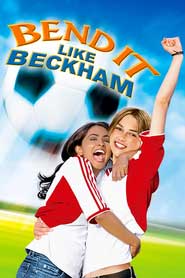 Are you the kind of person who likes to be different and full of surprises? Then invite your friends to your place, order out your favourite pizza, grab a case of ice cold beers and get ready for a treat. Instead of watching a classic American Football movie, something that everyone would expect to watch, be different and suggest a very humorous but great quality comedy. Bend It Like Beckham is a great football related comedy to watch, but not about football as used in the USA, but football as used by the rest of the world (aka soccer). Keira Knightley of Pirates of the Caribbean fame stars in this rather low-budget British flick, if you compare it to those produced by Hollywood. But in 2002-2003 it managed to get great critiques and generate an outstanding $76 million to its producers (a 13 times return on investment of only 6 million dollars). No wonder why it was characterized as the best British comedy since Bridget Jones Diary. British comedies are well known for their hilariously fresh and funny sense of humour, making this movie ideal for the cold nights before Super Bowl.

The Plot: Teenage girl Jesminder Bhamra (Parminder Nagra) lives in London, a girl who eats, sleeps and breathes football (soccer). Having football superstar David Beckham as her idol she dreams of becoming a professional footballer. But all does not bode well for the fact that her parents are an orthodox Punjabi Indian family who are opposed to the contemporary beliefs and wants of their daughter. Despite her parent’s opposition Jess is spotted by Juliette Paxton (Keira Knightley) who plays in a local football women’s league. Juliette convinces Jess to give it a go, with the latter proving to be a very gifted footballing talent. Jess dreams of playing in the Women’s United Soccer Association (WUSA) professional league in the USA. With her exceptional performances she manages to edge ever closer to accomplishing that dream. As well as Jules, Jess finds a great friend and supporter in the face of her team coach Joe (Jonathan Rhys Meyers). The three become close and manage to lead their team to the finals where a well respected US scout is going to be in the stalls. But there is a big problem arising on this day. Jess’s sister is getting married the same day with the final! What is going to be the choice of the teenager? Respect the family traditions and her sister’s wedding or chose to follow her dreams to a professional football career?

In this movie the contemporary blends with tradition perfectly with well timed humour and moments. It is also shown in a very representative manner. How teenagers think and how important it is for their parents to understand them. It’s a movie about balancing between wants and needs with the outcome being as flexible as the characters. You will definitely love this alternative offering with great laughs galore!