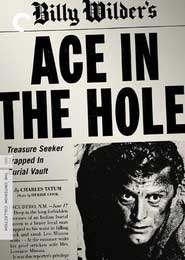 In the first half of his career, director Billy Wilder specialized in films revealing the dark underbelly of American society. With Double Indemnity, he all but created the noir aesthetic. The Lost Weekend was the first film to realistically convey the horror of alcohol addiction and Sunset Boulevard exposed the superficiality of the Hollywood system with seamless direction and beautiful gothic sensibility. In 1951, Wilder had one more dark drama in him before moving on to comedy and farce.

Ace in the Hole was a landmark film for Billy Wilder, but not in the way most would think. The finished product was a critical and box-office flop. Audiences and critics were less than impressed with it and the executive of Paramount Studios decided to change the picture’s name to The Big Carnival, creating an allure of audience accessibility. But Ace In the Holewas also the first movie for which Wilder shared writing, producing, and directing credit. It was Wilder’s show and the final product is his complete vision.

Kirk Douglas plays Charles Tatum, a brash, proud blow-gut recently eviscerated from New York. Tatum has been fired from multiple big-name newspapers because of his lying ways, a drinking problem, and even a moment of indiscretion that involved an affair with his editor’s wife. Now he’s in need of a job – a “swimming board” enabling him to float back to a bigger, better career – and he’s rolling into Albuquerque, New Mexico in his fancy car attached to the end of a tow truck. The Albuquerque Sun-Bulletin office strikes catches his eye.

Tatum enters and is shocked by how boring the office seems. After pacing aimlessly for a few moments, something catches his eye: there’s a piece of needlework hung above the editor’s door that simply says “Tell The Truth.”

“Well, isn’t that something. Who said it?” Tatum says with mocking relish.

“Mr. Boot said it, but I did the needlework.” replies the aging (but youthful) secretary.

Jacob Q. Boot is the editor of The Albuquerque Sun-Bulletin and he’s adroit at dealing with folks like Charles Tatum who immediately begins telling Boot how reading the paper made him want to throw up. Boot nonchalantly offers Tatum his nickel back and ultimately gives the man a job despite his insolent persona.

Tatum spends a year at the paper without one big story, until he’s given the opportunity to travel with a young reporter to cover a story about rattlesnake derby – far from a big break. On their way, the two men come upon an abandoned filling station where they’re informed that a man called Leo Minosa (Richard Benedict) is trapped alive in an ancient Indian dwelling up the road.

Under a manipulative guise of caring and responsibility, Tatum manipulates the already corrupt local sheriff, the engineer in charge of the increasingly elaborate rescue operation, and even Leo’s uncaring wife Lorraine Minosa (Jan Sterling). The simple rescue operation that could have been completed in twelve hours lasts six days and Charles Tatum creates a colorful media circus – a national attraction – in the middle of the desert. Everyone other than Leo Minosa profits his fate.

All great artists know that it is impossible to understand human nature and experience without looking at the extremes of greatness and vileness. Film noir prefers looking at the vile and Ace in the Hole proves that noir can sometimes be more about themes than aesthetics. Of all the films in the common noir catalogue, Ace in the Hole is one of the hardest to classify as noir. The harsh vision of the world and shadowy lighting in the cave where Leo Minosa is trapped seem noirish, but Wilder’s gutting of the sensationalistic media and the citizens who eagerly watch every filthy moment of it (“Mr. and Mrs. America”, as Tatum would say) is about as far from the criminal city streets of noir as you can get. Charles Tatum bears resemblance to paradigmatic noir protagonist, but could be best thought of as a typical noir “hero” taking a vacation from the city.

If there’s a real hero in this story from Wilder’s perspective, its Jacob Q. Boot; the scrawny, cautious newspaper editor who wears both glasses and suspenders … the man who supposedly coined the phrase “Tell The Truth” and hung it up all over his office building. Boot hires Tatum from the onset and consistently tells him to straighten up. He even takes a hiatus to the New Mexico desert during the heat of the journalistic carnival in an attempt to talk some sense into the derailed journalist.

During this encounter, Tatum becomes inflamed with rage as only a character played by Kirk Douglas can:

I don’t belong in your office. Not with that embroidered sign on the wall; it gets in my way. […] I’m on my way back to the top, and if it takes a deal with a crooked sheriff, that’s alright with me! And if I have to fancy it up with an Indian curse and a broken hearted wife for Leo, then that’s alright too!

Statements like this are what make the film’s ending so powerful because Jacob Boot’s office is where Tatum drags his bleeding, guilt-ridden body in a last-minute attempt to recover his soul. After being stabbed by an unwittingly feisty female, Tatum’s misery has brought upon him a sense of guilt which never gets a chance to fully break through his tough-as-nails exterior. Before lumbering back to town, he tries to tell a New York Times editor how he’s kept Minosa trapped for personal gain, but the newspaper mogul is too proud to listen. In a sordid and pitch-black way, Charles Tatum wants some kind of absolution, to come clean of his actions … something very rare for a noir hero.

It’s obvious that Wilder was quite the cynic and the world of Ace in the Hole can seem absurdly cynical upon first viewing. The moral reprobation of Charles Tatum is endless and the rate at which “the big carnival” grows (particularly the admission sign to the Indian ruins consistently advancing in price and the ridiculous big city attractions dragged out to the desert by the media) is wearying. Yet upon second viewing Ace in the Hole is so calculated and full of life that its environment seems like a haunting reality more than fifty years after its making. It may seem bleedingly obvious and even farcical the first time around, but if you’ve been out in the world long enough, the truth of it can’t be denied.

When all is said and done, Leo Minosa wasn’t trapped in The Cave of the Seven Vultures by rocks and firmament. He was trapped there by none other than Charles Tatum’s desire to become rich and famous, to make a name for himself and prove his place in the world. With efficacious realism, Ace in the Hole echoes a piece of wisdom known the world over but only rarely applied: “For what will it profit a man if he gains the whole world and forfeits his soul?”