Jane Campion has made a career out of making films that are richly textured and visually luscious. Whether it be a dysfunctional melodrama (Sweetie), a rather askew coming of age tale (An Angel at My Table), a damning portrayal of love and desire (The Piano), an elaborate acerbic drama of ill manners (Portrait of a Lady), an intensely drawn character study (Holy Smoke), a sexually taut thriller (In the Cut) or a poetic lovelorn tragedy (Bright Star), Campion’s auteuristic signature is a deeply arousing delectability in both visual style and content. With her deep dark colour palette and concupiscence of character, Campion paints the most rapturous of motion picture artworks and then thrusts them upon the decreasingly unsuspecting public as if they were just another love story, albeit twisted and usually quite tragic, for her fans and critics to contemplate. Yet instead of mere contemplation we are handed the most complex quasi-romantic visualizations. Even the filmmaker’s lesser works (and even Campion’s lesser works are still better than many a director’s best) are so rife with passion and eroticism, one feels they must devour her films before her films devour them.

Bright Star, the auteur’s seventh film – and her first in over six years – is the story of poet John Keats and muse Fanny Brawne (the original DIY fashion designer?). He, the disheveled rock-star-esque poet and she, the sassy, yet naive, girl next door. Like many – if not all – of Campion’s previous films, Bright Star is about passion and desire truncated by tragedy. Though more staid than usual, the filmmaker’s latest effort is no less scrumptious in both its ecstatic highs first breathed love and trembling lows of inevitable disintegration and death. Australian Abbie Cornish (poet Heath Ledger’s heroine chic art student girlfriend in Candy and the lost little girl runaway in the criminally overlooked dark down-under masterpiece Somersault) and Brit Ben Whishaw (Perfume’s psycho with a nose for murder and the most poetic of Dylan avatars in I’m Not There) play the tragic couple with a near perfect chemistry. Cornish’s heaving tantrums and desperate, sometimes obsessive, longings give her rather shallow Fanny Brawne a deep, textual sensuality. We see in her an undying – and somewhat unforgiving – love for Keats. Meanwhile Whishaw becomes a ramshackle tubercular genius and his Keats a tragic hero. In the end Campion’s performers seem just as delectable as her film. 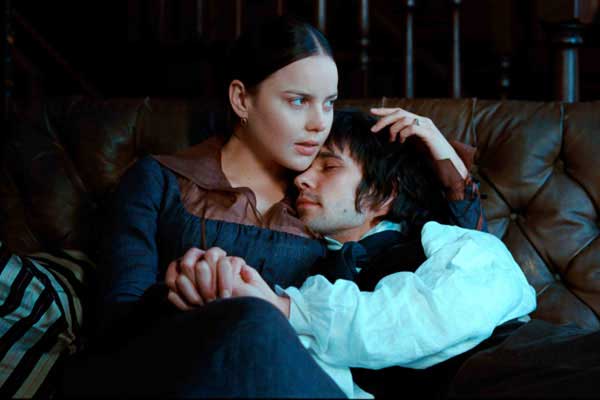 To end on the same note the film does – and to deliver the titular finale – I will hand this review over to Mr. Keats himself, and allow the poet to punctuate Ms. Campion’s film better than I know how.

Bright star, would I were steadfast as thou art–

Not in lone splendour hung aloft the night

And watching, with eternal lids apart,

The moving waters at their priestlike task

Or gazing on the new soft-fallen mask

Of snow upon the mountains and the moors–

To feel for ever its soft fall and swell,

Awake for ever in a sweet unrest,

And so live ever–or else swoon to death.