Cloudy with a Chance of Meatballs began in 1982 as a children’s picture book that told a simple tale about a town where it rained food. It was a dreamy bedtime story — whimsical and childlike at its core, but its realistic, minimally-colored drawing style showed that it had been filtered through the mind of a somewhat world-weary adult. The new film from Sony Animation Studios is almost the exact opposite: its visuals are cartoonish, slapstick-filled, and candy-colored, but at its heart lie some very sobering, adult themes. What began as a misty fairytale has been re-imagined into a disarmingly dark parody of science fiction and disaster movies — albeit one with wall-to-wall laughs and some of the most imaginative visuals this side of WALL-E. It borrows a few scenes and plot points from the book, but otherwise makes no attempt to remain entirely true to its themes — and is all the more stunning for it.

You load sixteen tons (of sardines), and what do you get?

The land of Chewandswallow where the book was set has here been re-imagined as Swallow Falls, a tiny island whose economy is based entirely on the export of sardines. It falls on hard times when the world realizes, as headlines everywhere put it, “Sardines are Super Gross!” With no source of income, the people of Swallow Falls are forced to eat nothing but the sardines they’ve caught (which, as previously discussed, are super gross). Fortunately, they have an aspiring mad scientist in their midst. Flint Lockwood (voice of Bill Hader, Saturday Night Live), a twenty something who’s dreamed of being an inventor since childhood, is on the verge of perfecting a machine that will turn ordinary water into any kind of food you want. Something goes wrong with the first test, though, and the machine is shot into the stratosphere, where it begins making it rain hamburgers.

It’s somewhat telling that the film feels the need to add an explanation for the island’s gastronomic meteorology — the plentiful food here isn’t unexplained manna from heaven, as in the book; it comes through the barrel of technology. Even more telling is the fact that once Flint’s experiment becomes a success, absolutely no one brings up the possibility of duplicating it in order to help relieve world hunger (or do anything else philanthropic). Once proven effective, the machine is simply allowed to hang in the air over the island, as Flint frantically types the increasingly gluttonous requests of the town members into his control box and the morbidly obese mayor (voice of the peerless Bruce Campbell) plans to exploit the unusual weather to draw tourism and bolster the town’s economy.

As with all great science fiction — comic or otherwise — Cloudy uses the presence of hypothetical technology to criticize the events of its day. Thanks to our own enthusiastic implementation of technology, we currently have the cheapest and most plentiful food in history — and all we can think of to do with it is eat more and more stuffed-crust pizza, triple cheeseburgers, and bacon sandwiches with fried chicken breasts for buns (google “KFC Double Down” if you think I’m joking). Cloudy isn’t exactly Food, Inc., but its social commentary runs deep — perhaps too subtly to register consciously with its young audience, but it just might start some interesting conversations.

As Flint’s food-creating machine gradually runs out of control, the air around it congeals into a culinary-industrial complex of gastronomic insanity, and huge, mutated food runs amok. This leads into some truly twisted sequences (one character gets eaten alive by a sentient roast chicken — but don’t worry, he comes back, much improved by the experience), which no doubt took some guts to put into a family-oriented movie. It’s all handled with a light, comic touch, however, and together with some spectacular action sequences (a chase through a spaghetti tornado!), it turns Cloudy into what is arguably the most imaginative disaster movie ever made (and I never thought I’d use those words in the same sentence). 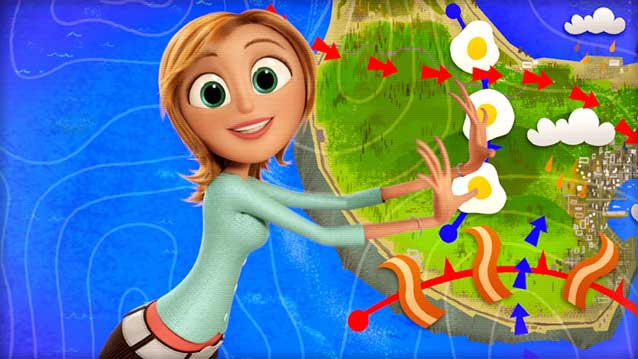 The bacon, my friends, is blowin’ in the wind.

Adding to all this are some talented, surprising casting choices — Al Roker, Lauren Graham, Andy Samberg, and Mr. T all disappear into some fascinating roles — and some standard Hollywood tropes that are used to great effect (the inimitable Anna Faris plays a deceptively ditzy weathergirl, while James Caan plays Flint’s distant, working-class father). Beneath all the hamming-it-up and the joke-a-second pace of the slapstick, though, are some serious messages for the modern world. Food, unused, is trash. Technology, uncontrolled, is master.

Towards the end of the film is a sight gag that will probably remain with me forever. When the meteorological chaos first begins, a citizen of Swallow Falls uses the opportunity to smash a storefront window and loot a TV. As soon as he runs off, though, a sentient, robotic television (long story) walks in and “loots” a human customer. At that moment, I probably laughed harder than I ever have.

Mainly so I wouldn’t cry.