Yes, Wes Andreson — the guy who directed Rushmore, The Royal Tenenbaums, The Life Aquatic with Steve Zissou, and The Darjeeling Limited; in other words, essentially the same comedy-drama hybrid about the same dysfunctional families and individuals, four times in a row. I don’t mean to be harsh — they weren’t bad films, by any stretch — but by the time Darjeeling rolled around, it was clear the returns were diminishing. Audiences stayed home, and the Academy pretty much ignored it (after giving an award to the Tenebaums’ screenplay a few years prior). Clearly, he needed to shake things up a bit.

And wow, has he. Fantastic Mr. Fox, his latest, isn’t only a different genre — it’s a different medium altogether. Gone is his usual motley crew of pseudo-indie actors, replaced by stop-motion figurines. Gone are his mostly-plotless screenplays, replaced by a children’s storybook by English author Roald Dahl (writer of Charlie and the Chocolate Factory and James and the Giant Peach). And — strangely — gone are all the usual four-letter words, replaced by the word “cuss” (“What the cuss!”; “This has become a total cluster-cuss!”; etc.). 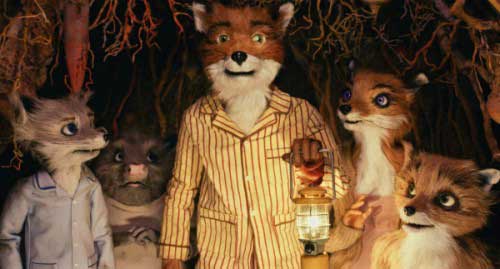 The result is easily Anderson’s most accessible film to date, even as it retains much of his oeuvre’s baroque, esoteric charm. As the story of a strikingly anthropomorphic fox (voice of George Clooney) who has to protect his family and friends (a menagerie of woodland creatures that includes Meryl Streep, Owen Wilson, Bill Murray, and others) from an onslaught of vengeful farmers, the story has quite a bit more thrust to it than any of Anderson’s recent films, making it much easier to sit through for the casual viewer. At the same time, its animation style — mostly fur-covered stop-motion figurines against hand-painted backgrounds — gives it a rustic, provincial (and somewhat retro) charm.

It’s beautiful, it’s funny, and the cast is top-notch — but more than anything, it left me wondering exactly who it was made for. One usually assumes that animated fare is intended for children (at least on this side of the Pacific), and the PG rating would seem to confirm that, but it has an edge that makes it hard to recommend for any child younger than ten (the morals here are  pretty complex, and one of the “bad” characters dies a pretty violent death). Additionally, while animation is “big” right now, it’s increasingly difficult to sell people on anything other than CGI. (Coraline was a moderate success last year, but it had something of a polished look to it;Mr. Fox intentionally looks a bit unfinished.)

But I’m sure finding an audience isn’t really the first thing on Anderson’s mind. The usual crowd of college hipsters will probably show up (heck, they probably made up half of the audience for Coraline, anyway), and — along with the families who take a chance on this one — they won’t be disappointed. Mr. Fox has a vitality to it that was missing from some of Anderson’s recent work — instead of being ponderous and self-indulgent, it’s light on its feet, adventurous, and fun. It’s not the best animated film to come out this year, but it’s definitely worth a look.