If nothing else, High School Musical 3: Senior Year is the first film in the series that actually features a high school musical (long-time fans will remember that the first was concerned only with the audition for the title event, and that the second actually featured neither a high school nor a musical). That may not be high praise, but I think it’s a pretty good metaphor: number three isn’t perfect, but I think you could make the case that it gets more things right than either of the previous two films did. It won’t change the minds of any of the HSM-haters, but it’s likely to be the least offensive to them. And if nothing else, it provides a pretty good glimpse into what could have been, had Disney given the original’s book and libretto the respect they deserved.

The main difference here, of course, is the decision to go with a theatrical release, which allows for a considerably larger budget (roughly three times that of the first and twice that of the second). It’s clear the money wasn’t wasted: say what you will about it, but this movie looks fantastic. From the cinematic camerawork to the elaborate sets to the astonishing choreography (which looks much better on a full-size screen), this is arguably the first High School Musical that presents a truly professional veneer. Given where it’s coming from, it’s really hard to ask for more.

On the one hand, I say that to be balanced; I know that while I love High School Musical with every fiber of my being, there are countless people out there who would rather [insert preferred method of torture here] than watch yet another installment. On the other, I say it because the idea of making sequels to High School Musical was probably a bad one to begin with. The first one succeeded almost despite itself — there was nothing particularly original about a musical about the production of a musical, or about a teen comedy that revolved around clique boundaries, or about the generic teen pop songs that populated its soundtrack. It was a production that simply made the most of what it had — the talented cast and director Kenny Ortega (known primarily for choreographing Xanadu and Dirty Dancing, in addition to working on Ally McBeal and Gilmore Girls) simply threw every ounce of energy and conviction they could into the production, and the result was a certain type of pop alchemy. It was a gem — a little bit of sweet fluff, impossible to analyze and impossible to argue with. To attempt a sequel to such a pleasantly saccharine fairytale was the cinematic equivalent of following dessert with more dessert (with the guarantee that the second one would be leftovers, of course).

I doubt Disney gave the prospect even that much thought, though — after all, the first installment made them piles and piles of cash (and rightfully so), so a franchise was pretty much a foregone conclusion in terms of Hollywood thinking. It came as no surprise, then, that the second film in the series showed much of this strain. The story was almost self-consciously inconsequential, the songs were bland Mouse Factory radio hits, and the whole thing played more like a music video than a musical. It wasn’t necessarily bad, so much as it proved that the original HSM formula could only stretch so far (namely, about an hour and a half). 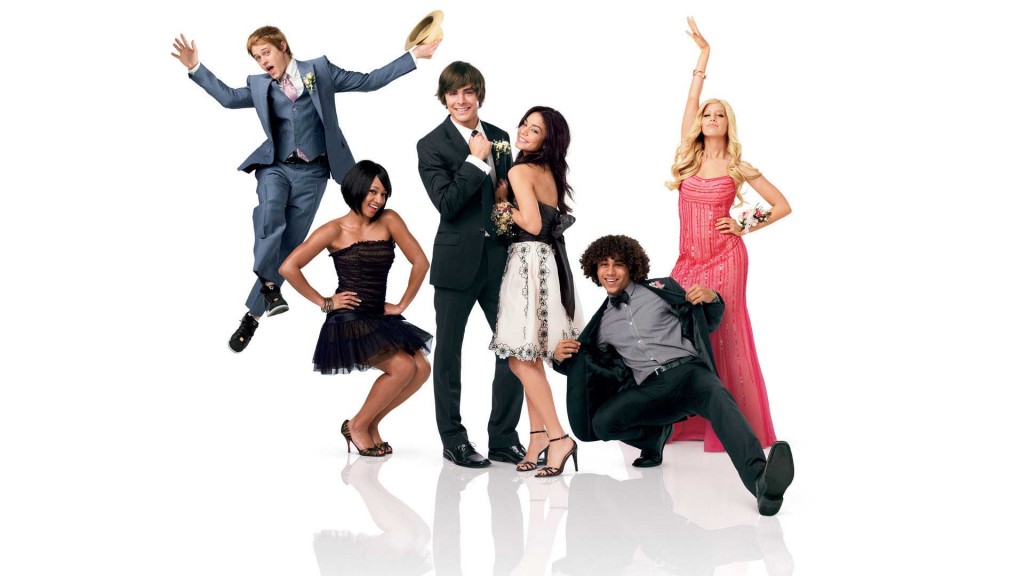 It’s all singing, all dancing, all the time!

The new film mostly corrects for this, first by returning to the setting of the original, and second by attempting to develop its characters into real people. The comic melodrama of the first two films has been mostly replaced by serious talk about the kids’ impending graduation and big questions about The Future (if the second installment tried a bit too hard to be superfluous, this new one probably tries a bit too hard to be serious). In other words, if the first film taught kids to Believe in Yourself, and the second one taught kids to Be True to Your Heart, number three teaches them to Get Off Your Butt and Get a Job.

There are moments when the angst gets in the way of the fun, but it really was the right decision — especially since the newly fleshed out characters play much better on the big screen than their previous incarnations would have. This new ambition makes for a much more interesting concoction (call it some vegetables with your dessert) than another rehash of the first film would have — and it’s an ambition that’s not limited to the drama.

Put simply, everything about this film screams ambition. You can say what you want about the saccharine songs, but the choreography here is nothing short of astonishing. The larger budget has obviously allowed for a lot more polish, and everything looks perfect. Highlights include “The Boys are Back,” a number that features Troy (Zac Efron) and Chad (Corbin Bleu) breakdancing and sword-fighting through a junkyard and “I Want It All,” a surreal, Fosse-inspired number performed by the inimitable Sharpay (Ashley Tisdale, who’s just as scenery-chewingly awesome as ever) and Ryan (Lucas Grabeel, still my favorite character). As with other films in the series, the songs here are something of a mixed bag — the finale (titled, cleverly, “High School Musical”) is as instantly forgettable as the finales from the previous two films (why they can’t come up with a showstopper for these things is beyond me), but they have finally crafted a memorable love theme for lead characters Gabriella (Vanessa Hudgens) and Troy (the hauntingly beautiful waltz “Can I Have This Dance”) — but, on the bright side, the music is finally given the screen time it deserves (in other words, the contrived dialogue has taken a backseat to the song and dance).

But again, as with the first film, the magic isn’t so much the material as it is the exuberance that the cast and crew pours into it — an exuberance that High School Musical 3 possesses in spades. Everything here, from the singing to the sets to the costumes to the physical comedy, is as good as or better than it’s ever been in the series. It may not be a perfect film, but it is an impressive piece of work — one that has to be seen on the big screen to be fully appreciated, and this might be your only chance to do so.

In other words, it’s dessert time again. I hope you kept your fork.