Near the top of any of list of 2008’s most acclaimed foreign film offerings is a new Czech film by famed director Jirí Menzel titled I Served the King of England. Known best for his masterful 1966 adaptation of Bohumil Hrabal’s novel Closely Watched Trains (available on DVD from The Criterion Collection), Menzel again refers to Hrabal’s work as inspiration for this historically panoramic fable.

I Served the King of England is the story of Jan Díte, a Czech native who we meet as he’s being released from the Prague Correctional Facility. After 15 years of imprisonment, Díte has been released on parole to go work in the mountains. Thus, the film is told in flashback; think Forest Gump but in Czech. Through his narration, we quickly learn that Díte has had a singular dream all his life: to be a rich and famous millionaire.

The dream began at a young age when he noticed the extent to which rich men would stoop to get money. One of his favorite activities was to throw handfuls of change into the air and watch pompous sophisticates crawl on their hands and knees to retrieve it. 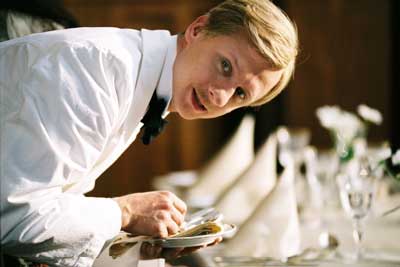 A waiter in training

The first half of the film has an undeniable theatricality – much like a knowingly naughty pre-Hayes Code musical. While serving at a local restaurant, Díte earns the attention of a beautiful young woman who happens to have a job at a local brothel. Here we learn of Díte’s favorite pleasure with the ladies: to adorn their nude bodies after intercourse with anything from flowers, to fruit, to money from his ever-expanding purse. The women love it when Díte puts a large mirror by their side so they can see his work; they endlessly gaze at him with looks of longing and orgasmic glee.

Conveniently enough, Díte moves on in life and gets various jobs, which place him in close proximity with other “women of pleasure.” He headlines in posh hotels, military brothels, and even a Nazi breeding ground. In his journeys, he has a chance encounter with a maître d’ who once served the king of England. The maître d’ takes Díte under his wing and teaches him the best tricks of the trade.

Díte (played by Ivan Barnev) is a happy-go-lucky joker in these flashbacks, but the older Díte we see working on parole (Oldrich Kaiser) is the same man – just older and perhaps a bit wiser, even though he always keeps his naughty streak.

Jan Díte can best be described alongside the stars of classic silent comedies. His physical adeptness and short stature recall Buster Keaton and Charlie Chaplin, as does his willingness to play tricks on unwitting supporting characters. There’s even a silent sequence complete with intertitles, sped-up film, and sepia toned image near the beginning that pays direct homage to this rich cinematic heritage.

I Served the King of England is a very ambitious film, to say the least. In a two-hour run time, it explores single-minded ambition and greed on multiple levels through scenes of physical comedy, lavish food and drink, and absurd sexuality all set against a background of social and political pandemonium before, during and after World War II.

With beautiful cinematography and perpetual flourishes of visual creativity, the film certainly aims high. Still, many will probably walk out of the theater feeling dissatisfied. The multiple strands of the story never quite mesh into something complete. Even more worrisome is the film’s treatment of the female sex. 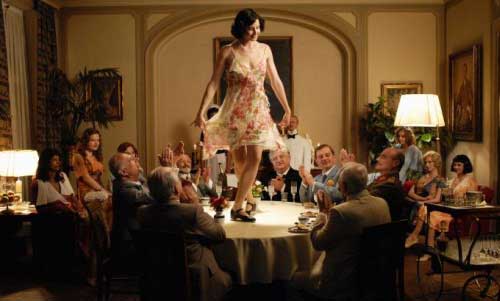 I Served the King of England is incessantly distracted with an overabundance of beautiful women. This is certainly nothing new (and usually not detrimental) for mainstream European cinema, but the only woman in Menzel’s film who isn’t defined by her sexual availability to men happens to be an impassioned Nazi who never stops talking about the wonders of eugenics. Díte takes her to bed and while making love, she moves him away from her face multiple times so she can better see an elaborately mounted portrait of The Fuhrer on her wall.

Jan Díte’s life is one of casual greed and self-love, both of which Jirí Menzel would like us to think he’s recovered from by the end of the film. The problem is that we never see much evidence leading to his redemption. There’s a highly metaphorical scene where Díte arranges many mirrors in a large room enabling him to look at himself from multiple angles – to “take stock” of his life – but his attitudes don’t change afterward.

In its swift run through WWII, the film also treats pertinent events likes the Holocaust as little more than a footnote. They’re mentioned, but any emotional gravity or sense of tragedy is sucked out by yet another scene of Jan Díte decorating his bedroom conquests with flowers and fruit. In moments where it would like to be a moving human drama, the film spirals into moments of absurdist comedy, usually ending in a fair share of stilted eroticism.

I Served the King of England is a whimsical fable from beginning to end — a fact that works for and against it in equal measure.