If parody seems like a tired genre now (look for any film with a two-word title that ends in the word Movie for proof of this), there’s a good reason for it. Beginning in 1974 with Blazing Saddles, Mel Brooks propelled the broad genre into the mainstream, and it remained in the limelight for a decade or two, possibly climaxing (artistically) with Young Frankenstein and (commercially) with Space Balls. As one might imagine, Brooks inspired any number of followers, which all created more parody films—with very mixed results—throughout the 70s and 80s. One of the less-remembered of these is Johnny Dangerously, a parody of Warner Bros.’ 1930s-era gangster films (Scarface, Little Caesar, etc.) starring Michael Keaton and directed by Amy Heckerling (fresh from making the seminal Fast Times at Ridgemont High).Dangerously isn’t the best film from the genre (or the era), but it makes for an entertaining watch, and has some genuinely funny moments.

The film wisely sticks to the tried-and-true basics of the genre which it parodies, telling a fairly typical rise-and-fall gangster story, with an appropriately half-hearted moral tacked on at the end. Keaton plays the title character (no, Dangerously is not his real surname), the son of an Irish immigrant who is forced into a life of crime to pay for his sick mother’s numerous operations. He succeeds for a while at leading a double life—keeping his mother (Maureen Stapleton) and brother (Griffin Dunne) in the dark as to how he actually makes his money, and going so far as to pay his brother Tommy’s way through law school. It all begins to unravel, however, when Tommy becomes the District Attorney for Chicago—and makes Johnny Dangerously, the notorious gangster, his number-one target. By this point, Johnny is trying to get out of the business, but his mafia family has other plans.

This all makes for a good framework to hang the gags on, but what’s really surprising and impressive about Dangerously is how effectively it evokes the mood of the old Warner Bros. dramas. Despite the fact that it is filmed in color (presumably the black-and-white-as-anachronistic-humor thing had already been done too well by Young Frankenstein), the photography, with its earthy grain and infrequent cuts, evokes the exact mood of a 1930s crime picture. The sets are also perfect (and done in impressive detail), from the colorful art deco of Johnny’s highlife, to the impoverished clutter of his mother’s apartment, to the classic hardwood architecture of city hall and the courthouse. Even the characters themselves evoke the mood effortlessly, without becoming bland archetypes (one of the unfortunately common pitfalls of parody-making). 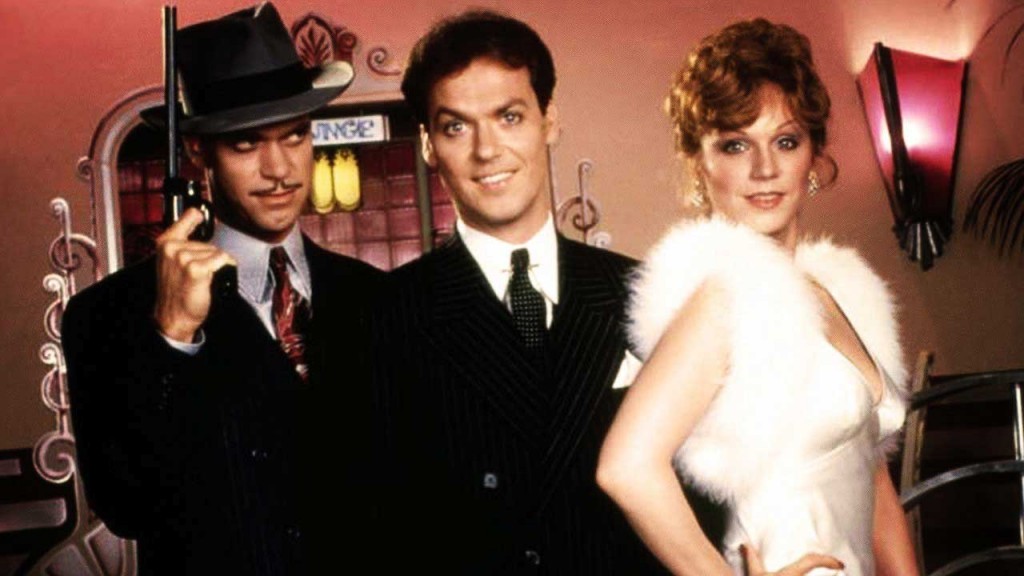 Okay, enough on the quality of the filmmaking—is it funny? The answer is mostly yes. The film opens with one of the best and most unexpected sight gags you’ll probably ever see (I won’t spoil it here), and there are enough quotable lines to satisfy the frat boy crowd (“Did you know your last name’s an adverb?”). Joe Piscopo puts in an excellent performance as a truly hateable—but very funny—villain, and Dom Delouise makes a great cameo as, of all things, the Pope. The film has the most comedic success when it sticks close to its gangster movie roots, however—an anachronistic game show sequence and an unfortunate documentary entitled Your Testicles and You! are both excruciatingly unfunny missteps. Those who are patient enough (and familiar with the genre), however, will notice numerous subtle sight-gags and in-jokes that are worth the price of admission.

Johnny Dangerously is probably best enjoyed in a group—so you can kill time for the stretches where the movie fails to bring the proverbial funny. It is worth seeing, however, and in many ways it works just as well as a traditional gangster film as it does as a comedy. There’s some genuine drama mixed in with the satire here—if that doesn’t sound appealing, now you know to stay away. But it’s hard to deny the film has a real charm to it, despite its shortcomings.