Well, half a movie is better than none at all, right? I hope for Nora Ephron’s sake (and the sake of all those who sat through her latest) that is true, because half a movie is just what we get with her latest candy-coated confectionary, Julie & Julia. On the one hand, half of this bipolar motion picture is a vibrant and joyous movie about love, passion and French cuisine, starring the effervescent über-actress almighty, Meryl Streep, walloping out a pitch perfect portrayal of the ever-fascinating “Lady of the Ladle” Julia Child. On the other hand, Ephron’s typically underwhelming will-o’-wisp filmmaking style lends to the other half of her film being an annoying, and quite cloying, middle management kind of affair, featuring the usually dependable Amy Adams as wouldbe back door cook and average cubicle cutter, turned dogged blogger Julie Powell. It is a tale of two women – one weak, one strong, one a powerhouse, one a sniveling wannabe, one an ingenue, one Meryl “freakin” Streep – and no matter how hard poor Miss Adams, or for that matter, poor schmucky Miss Powell, tries, never these twains shall meet. 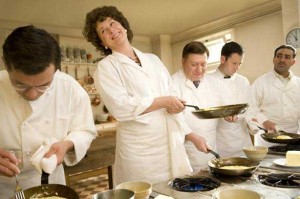 Now one should not put that much blame on Adams. Granted she is a young actress and she is competing for screen time with La Streep (poor Anne Hathaway was blown away by the power of La Streep in The Devil Wears Prada). Then again, she held her own – and then some – against the formidable actress just a year ago when they co-starred together (and actually had scenes together, unlike here) in Doubt. Portraying, the sad sack Powell (upon whose blog-turned-best seller about making every dish from Child’s epic master cookbook, this movie’s lesser half is based) schlepping around Brooklyn, whining that she has no life, is a dead end job if ever there was one. Meanwhile, over on the other side of the tracks (that being Paris of course) we have the aforementioned La Streep, one of the most enthralling, enticing and engrossing actresses of her day (of any day!) taking on the role of Julia Child (upon whose memoirs “My Life in France” the better half of this movie is based) who in her own right is one of the most enthralling, enticing and engrossing women to have ever broiled up a batch of Boof Bourguignon on national television. How can an actress compete? For that matter, how can a movie compare?

Granted, the food is quite enticing throughout (with the notable exception of a misguided attempt By Powell to make her way through Child’s aspic chapter – ughhh!) and one should definitely not go to this film hungry (as yours truly did), but in the end – no matter how appetizing much of it may be (well, except for those aspic attempts) and no matter how much we all love Meryl Streep (and who doesn’t – even in the worst of films? Well, maybe not Mamma Mia!, but hey…) – all we are left with are a few hunger pangs and half a movie to take home in a doggie bag. Bon Appetit…not!