It’s not difficult to imagine that if Moon had been a Hollywood production, it would have been a very, very different film. It’s “science fiction” in the traditional sense — i.e., it’s fiction about science. You won’t see any giant robots, any cities getting leveled, or even any CGI to speak of. What you will see is a haunting meditation on identity, technology, overpopulation, mankind, and the economic engine that drives all of us — and its devastating consequences to the individual.

In Moon, the surface of the titular satellite — a harsh, barren wasteland — swallows the screen and consumes the thoughts of director Duncan Jones. What was once a triumphant symbol of the boundless achievement potential of mankind has here become a haunting metaphor for loneliness, disassociation and Marxist alienation. The premise Jones presents us with is simple: the earth has run out of energy, and the moon has been found to possess an isotope that can supply as much as 70% of its power. Lunar Industries, LLC, a for-profit organization, has established a base on its dark side in order to extract it. The base has a crew of one — and each crew member signs on to three full years of solitude. 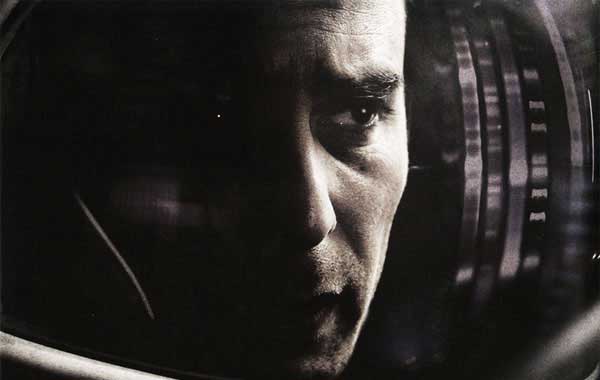 Moon is a small, claustrophobic film with relatively modest ambitions (especially given its genre), and the story unfolds so perfectly and delicately that I’m terribly scared of giving anything away by summarizing it (much of the story’s power relies on an element of mystery). The outside world is never seen (not counting an television ad for Lunar Industries that opens the film), and we are with crewman Sam Bell (played by Sam Rockwell) throughout the hour-and-a-half running time (giving the film, depending on how you count, a cast of one). We catch up with him just as he’s weeks away from completing his tour of duty, and we stay with him as he’s forced to come to terms with truths that are not entirely comfortable.

Like most independent films, Moon has an extremely tiny budget — about $5 million U.S. — but like the best independent films, it allows this to work for it. The moon base Sam inhabits is a squalid, disorganized shack that puts the lie to whatever utopian visions others might have for the future. The lunar vehicles roving the moon’s surface outside are represented by models, not the whiz-bang computer graphics that almost any other director would have chosen to use. These are ugly, drab things without any flash — machines of industry, harsh realities and nothing more. Moon, in a sense, is a beautifully shot film — but still, you won’t find any eye candy here. 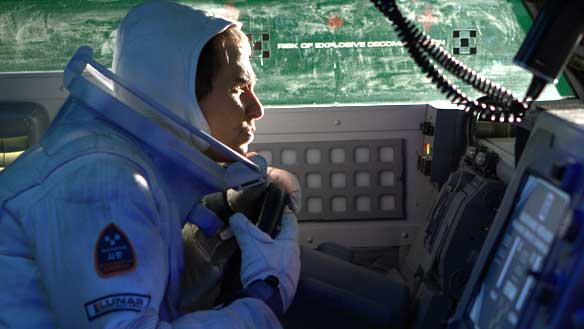 This is appropriate, because Moon is a film that, like the best science fiction, isn’t really about “the future.” It’s about humanity — past, future, present — and the economic reality that one human being is always stepping on another in order to make a buck — no “advancement” comes without a price. It’s quite telling that the film’s one non-human character, a robot named GERTY (voiced by Kevin Spacey) turns out to be its most “human” character. Jones has taken the now-archetypical character of HAL from Stanley Kubrick’s2001 and stood it on its head — a clever stylistic decision, certainly, but also a thought-provoking one. The evolutionary process and human spirit that are so worshipped in Kubrick’s film are here shown to lead in circles and to dead ends — not because of evil or error, but simply because that is their nature. As we as a species strive to “advance” — economically, technologically, etc. — it seems we always end up paying a price with part of our humanity — in every sense of the word. There is much to ponder in Moon — much that I wish I could probe into — but to go into it here would do the film a disservice. See it for yourself, and then decide exactly what “humanity” is.