Rick Olson runs the stellar Coosa Creek Mambo, a wonderful mix of reviews, scene analysis, history, and pointed opinion. Here he combines all of his talents to present a thorough essay on one of the greatest heist flicks of all time. After reading this, be sure to visit his extended piece on Jules Dassin and the blacklist. Great, great stuff.

The thing to understand about Rififi (in French, Du rififi chez les hommesi) is that it was made by an exile, a stranger in a strange land, to use an overused phrase. But it’s true — having been in Paris for only a few years, Jules Dassin’s French was none too good. Further, he wasn’t exactly in the best frame of mind — just three years before, he’d left the United States, blacklisted, out of work, and heartsick at his treatment by people he thought to be friends. Finally, he needed the work, so he took a job writing and directing an adaptation of a novel — by Auguste le Breton — that he hated upon first reading.

Nevertheless, he took the job and made it his own . . . and he did it by expanding an incidental section, that took up only a fraction of a chapter, to make it the centerpiece of the film. I’m talking, of course, about the famous heist scene, which has been so influential to so many movies over the years. Twenty-eight minutes long, and without dialog or music, it is perhaps the textbook case of how to build and maintain tension over an extended piece of celluloid. 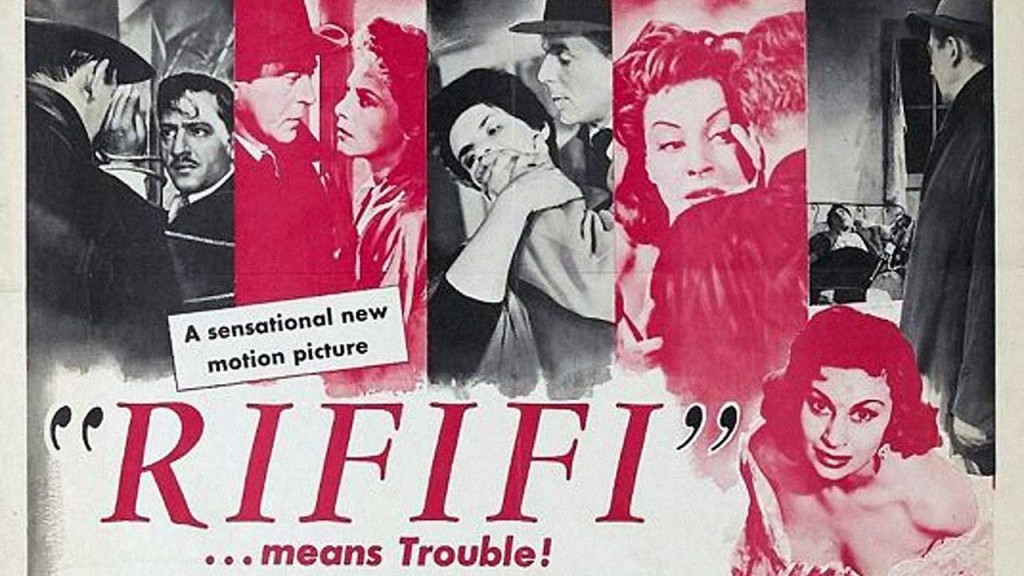 But first things first. The opening scene, as in any great film, sets the tone: Tony le Stéphanois (Jean Servais), fresh out of prison, has just tapped out of a backroom poker game. The camera pans around the table, and the tough, weathered faces could have been imported from any Hollywood crime drama of the period.

Tony wants somebody to stake him, to give him a chance, but nobody will: even the legendary Stéphanois can’t catch a break from this crew. He is sallow and gray, and wears his jail-house pallor like a shroud. His discreet, frequent, coughs let us know that he is tubercular, and we wonder: will that come into play? Will it debilitate him at a critical moment, will its sound give the thieves away? He calls his buddy Jo le Suédois (Carl Möhner), and the last piece of this puzzle falls into place: Tony has taken the rap for Jo, and Jo — much to his wife’s consternation — cannot help but come to his aid.

Tony’s on the make, he’s flat broke and he needs the money; there’s a certain desperation that can be seen in his haunted eyes, and it isn’t long before he begins to even some old scores. First up is his ex Mado (Marie Sabouret) who has taken up with a shady hoodlum. Enraged that she didn’t wait for him, he takes her up to his shabby apartment, humiliates and makes her strip, then beats her severely. The violence occurs just off-screen, but it is no less shocking for that; afterward, when the camera cuts to Tony’s face the look of mixed horror and satisfaction is chilling to the bone.

The scene is shocking even by today’s standards, and it soon becomes apparent that violence is a major motif of the film. Rififi, we learn, means “rough stuff,” and it certainly applies, not only to the intermittent bursts of bloodshed, but to the enterprise of the robbery itself. In fact, it’s a whole world of rough stuff that these men inhabit, and the production design, embedded in the streets of Paris, reflects it. This is no story-book, Godardian, New Wave Paris that lovers love and Americans love to imagine. This is a gritty town, a black and white town, a town of hard men and, well, rififi. 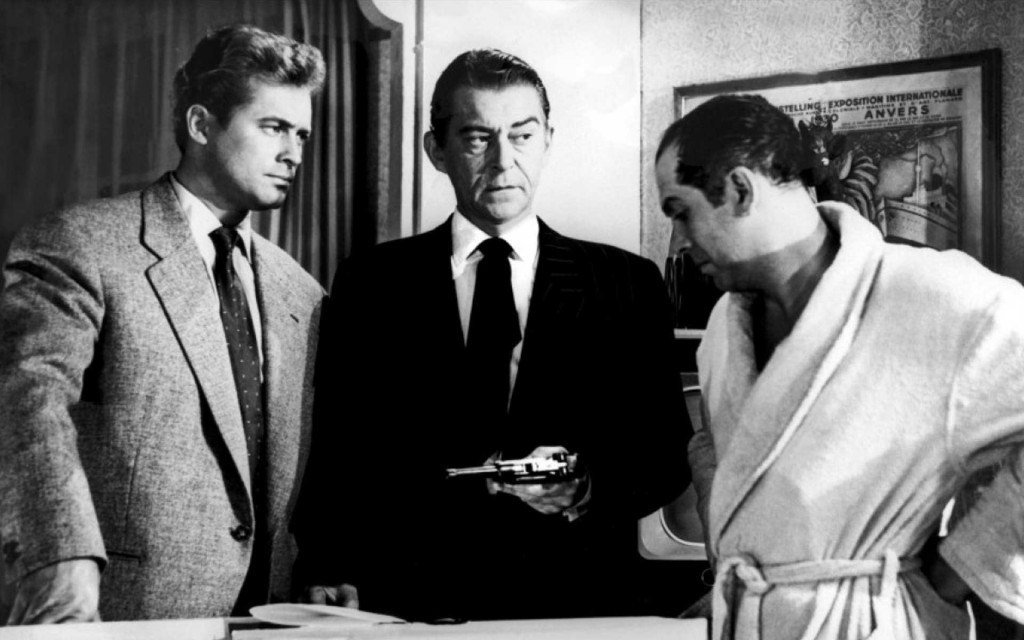 Coming into this film, Dassin had a considerable reputation as an interpreter of cities on film. The semi-documentary The Naked City,shot in New York, and the masterful Night and the City, filmed on the mean streets of London, established him as a major player on the neo-noir scene. In Paris, he doesn’t disappoint: the city’s streets lie slick with rain, under lowering, threatening winter skies. He and cinematographer Philippe Agostini invest even the most ordinary of locales — nightclubs, brasseries, tenement apartments — with rough grace and ordinary realism that is consonant with the film’s grim narrative.

Unlike in subsequent heist movies, where the robbery itself occupies most of the third act, in Rififi it constitutes the bulk of the second. Although it is definitely the highlight of the film, it is bookended with human drama, and that is where Dassin’s real interests lie. In the first act, we are introduced to the players — Tony and Jo, along with Jo’s pal Mario (Robert Manuel) and safe cracker César the Milanese, played by Dassin himself under the name “Perlo Vita.” It is César’s infatuation with women, particularly a chanteuse named Viviane (the incredibly sensuous Magali Noel), that is the gang’s eventual undoing.

Then, after all the preparation, comes the heist, and riveting it is. It begins when the gang ties up the couple in the apartment above the store, continues through the agonizingly slow hammering through their floor, and on into the wee hours of the morning. They must be done before the street awakens at half past six — after all, there’s no suspense without a deadline — and Dassin relies on the simple, yet effective, means of placing a clock in the foreground and panning over it from time to time.

Of course, it is famous for being without dialog or music, and Dassin says that was partially due to his shaky grasp of French. Then too, composer Georges Auric sided with producer Henri Bérard in insisting on composing music for the sequence. It was only after Dassin showed him rough cuts of the sequence with and without the music he’d written that he capitulated. As it stands, the sequence is breathtaking in its intricate choreography; the gang is presented as a well-oiled machine, and we are fully convinced that they could in real life get the goods.

After the heist, things go disastrously wrong as Mado’s vicious lover, the owner of the nightclub where Mado works, attempts to brutally acquire the loot. One scene stands out: Tony finds César tied to a pillar in the deserted nightclub and realizes that it’s he who has betrayed them. César is mortified and humiliated, and apologizes; Tony, however, isn’t buying it: “I liked you, Macaroni,” Tony says, “But you know the rules.” Indeed he does: César nods silently, his face illuminated with alternating bars of dark and light. And as the camera dollies back and away, a gunshot rings out, and from Tony’s P.O.V. we see César slumps lifeless to the floor. Though this violence is shown onscreen, we are distanced from it, as is Tony, because after all: rules are rules. It isn’t our fault, rules are simply rules.

Of course, there’s not much distance between the blacklisted Jules Dassin and this scene. Tony’s peculiar sense of honor was violated by this betrayal just as Dassin’s was after his friends named him on the floor of the House Committee on Unamerican Activities. On Criterion’s DVD of the film, he speaks poignantly of how hard it was for him to comprehend his friends’ betrayal: “I’m talking about people like Clifford Odets and of course Kazan and others, and each one was a heartbreak, because first of all, these were all friends and we thought principled people, and it was very difficult.”

The rules of collegiality and friendship had been ripped apart in the blacklist, and the bitter nihilism it left behind permeates the entire film. We can see it in the tragic plot, the grimy Paris locales, and especially in the haunted face of Jean Servais. Cast because he was cheap — the film had a tiny budget — the Belgian actor hadn’t worked for years because of a drinking problem. Here, he is pitch-perfect, embodying Dassin’s tragically-flawed protagonist with eerie accuracy.

Although he didn’t work for nearly four years, Dassin’s flight to Paris had at least one salutary effect: it got him out of Hollywood (or as Dassin himself put it, “away from MGM and company”). Thus the innovative editing by Roger Dwyre, which does not always toe the Hollywood-continuity line. It’s perhaps best seen in the scene with Mado in Tony’s room, as judicious disregard of the 180-degree line serves to disorient us, and especially in Tony’s mad, kaleidoscopic race across Paris at the end. I can imagine Dassin’s old boss Daryl Zanuck cringing at the sight.

Rififi was an enormous, unlooked-for success around the world. It won Dassin Best Director at the 1955 Cannes Film Festival, and restored his finances almost overnight — because producer Bérard paid him next to nothing, he took a cut of the profits, and he was well rewarded. For years afterward, movies totally unrelated traded off the name: there was Du rififi à Tokyo, Du rififi à Paname, and Du Rififi chez les femmes.

Its effects on subsequent heist movies were huge as well: it is an acknowledged influence on such films as Reservoir Dogs, Mission: Impossible and Heist. Equally important, it signaled the beginning of the end of the blacklist, rubbing American noses in its success. Although it wasn’t until 1960 that the blacklist was officially broken (when Douglas Trumbull was openly hired to write Spartacus), the worldwide acclaim of Rififi exposed the hollowness at its core.