I have never experienced a film like Speed Racer before in my life. It is an exuberant, giddy, unabashed celebration of the wide-eyed wonder that shines in the eyes of little boys who believe with every ounce of their being that a 2 inch Hot Wheels car can accelerate at 500mph through a loop-de-loop, flip majestically into the air over the competition, and soar into the stratosphere with a jet-propelled rocket (which is obviously strapped to the back). Physics? Gravity? What are those things? I left the theater with a shockingly goofy grin plastered all over my face, fully believing that nothing was impossible and that no one—no one!—could tell me what I could or couldn’t do. That is the raw power of this film: to transport you to a place where the world is an epic adventure waiting to be seized, where dreams and possibilities are as big as you can imagine them, and where the crushing mundanity of adulthood is left eating the dust of the sleek, physics-defying Mach 5 driven by a boy named Speed. This is the stuff little boys’ dreams are made of, and heaven help me, I loved every thrilling second of it. 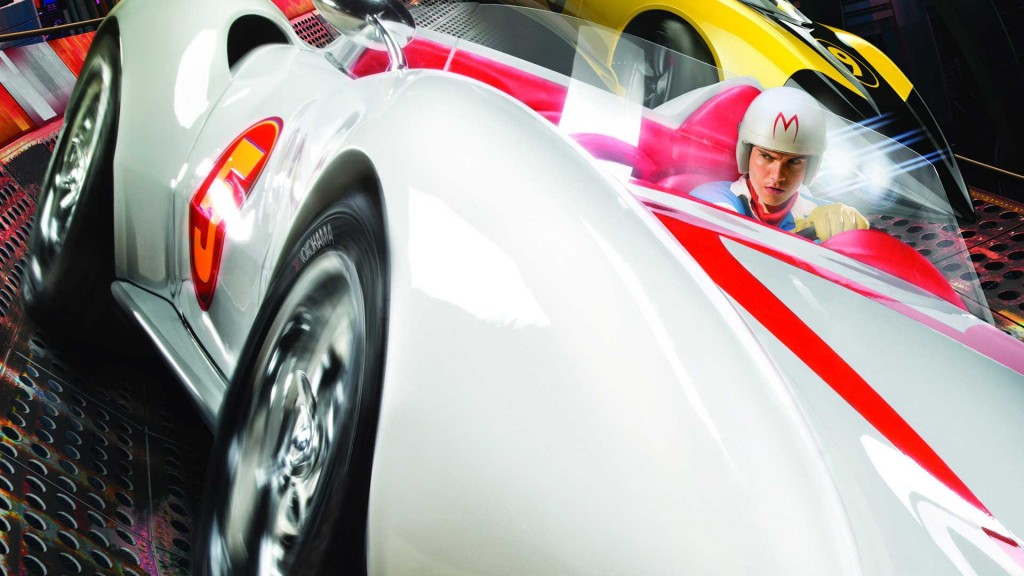 The world the Wachowski brothers (The Matrixtrilogy) have crafted might best be described as what would happen if you taped a box of Crayolas to a grenade and pulled the pin. It is a vibrant, whimsical universe where the sky is never cloudy, the cities are bubblegum popping Asian megatopias that hint at what L.A. might have looked like in Blade Runner if Scott had gone the ‘cute’ route, and every house in suburbia has a gleaming racecar parked in front of it. Into this world steps Speed, a boy with a drive and genius for one thing and one thing only (three guesses as to what that is). Idolizing his older brother Rex, he and his family’s world is rocked when the elder Racer abandons the family business to drive for corporate interests and is subsequently killed in a vicious cross country race called The Crucible. Speed, embracing the Racer mantle on the fast track to racing success (played by equally fast rising star Emile Hirsch of Into the Wild), is courted by the corporate machine, represented by the grandiose E.P. Arnold Royalton (played with delicious villainy by Roger Allam, the propagandized news anchor from V for Vendetta), who tells him that racing is rigged, has always been rigged, and that if he doesn’t get with the program he won’t win, he won’t place, he won’t even finish the race. Those are fighting words, methinks, and the rest of the film is spent cheering Speed on (which I did out loud, numerous times) as he attempts to make Royalton eat his proverbial shoe by winning the race that took his brother’s life.

I’ve never seen the original Japanese cartoon this was based on (debuting in the ’60s, it was a bit before my time), I have no nostalgic attachment to the car or the characters, and my limited knowledge of it comes from pop culture parodies in shows like The Family Guy andRobot Chicken. I went in with few expectations other than tasty eye-candy and a story that didn’t insult me. To my (happy) surprise, not only were the visuals gaspingly grand, the story was emotionally resonant in a way that stirred me. At its heart, Speed Racer is about the value of family, the importance of always doing what you know to be right, and that you never, ever sell out your dreams. Clichéd and oversimplified? You betcha, but the Wachowskis have crafted a film for kids and as such the message is delivered with a younger audience in mind. The values are pure, unambiguous, easy to grasp, and ultimately inspiring. It’s a throwback to the moral simplicity of the ’50s, but that’s not a bad thing: we could use more Leave it to Beaver and less Married With Children these days.

John Goodman and Susan Sarandon imbue Speed’s parents with a relatable heartwarming tenderness, and when she tells him that what he does behind the wheel of a car is “art” and how she’s “impossibly proud,” your eyes practically tear up along with hers. Spritile (Paulie Litt) and Chim-Chim (a monkey), filling out the rest of the Racer family, consistently steal every scene they are in, including one faux-anime sequence that had me gut-busting with its wink-wink nudge-nudge shout out to the original cartoon. And finally, Christina Ricci (who was apparently born to be a live action anime character) is Speed’s forever-girlfriend Trixie. While she adds a sweet dose of romantic interest, the film is ultimately more about boy-meets-car than boy-meets-girl. 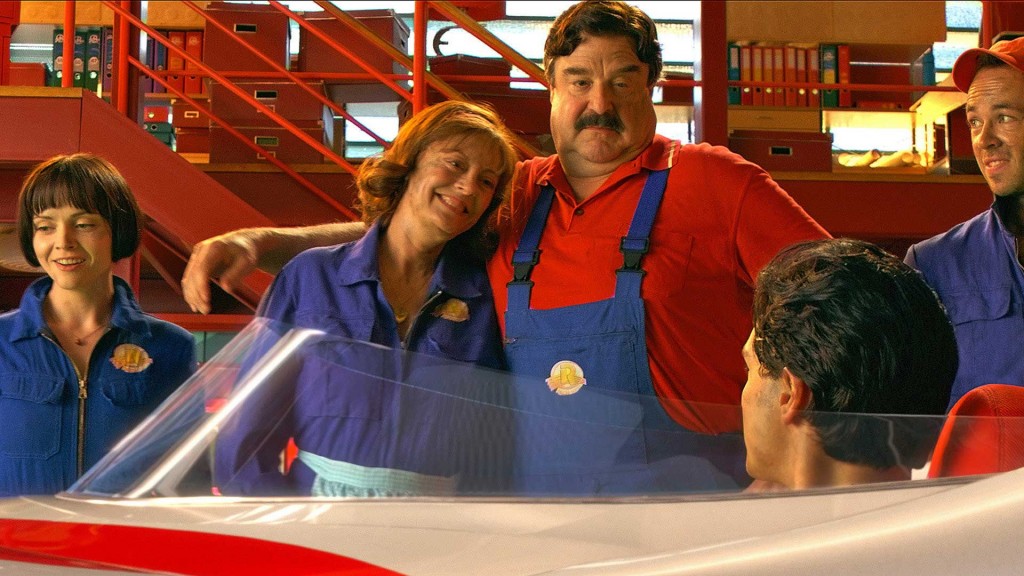 The opening sequence beckons us into the frenetic world of Speed Racer by blending multiple flashbacks with the present, organically introducing characters in the midst of a blistering race, and rejecting traditional cuts for anime inspired wipes. It is expositionally intense, eye-poppingly gorgeous, and a revelation in editing technique, a glorious cinematic hybrid of digital wizardry and Eisenstein’s montage. The races, likewise, are breathtaking, both in look and in action. Pinball-esque half-pipes corkscrew through the air like rollercoasters on crack, grand coliseums hold labyrinths of spikes and pillars, and dusty orange sand clouds whip across deserts that look like they’ve been filtered through the mind of Salvador Dali. Through them all zoom whip-like Speed’s virginal white Mach 5 and his sinister competition. As in The Matrix the laws of physics have been firmly shredded, and cars spin and flip and twist through the air in acrobatic displays of vehicular superheroics. Equipped with James Bondian gadgetry, the racers attack one another with morning stars, saw blades, purple oil slicks, and even (in one hilarious instance) an angry beehive. The races recall the dizzying magic and frantic energy of Harry Potter’s Quidditch matches, and as a colleague of mine astutely noted, “It’s like Super Mario Kart if you were IN Super Mario Kart!” The Wachowskis are changing the rules and innovating the world of film like psychedelic revolutionaries. Not to put too fine a point on it, but the last time this happened was in ‘77 when a guy named Lucas came out with a little independent film called Star Wars. 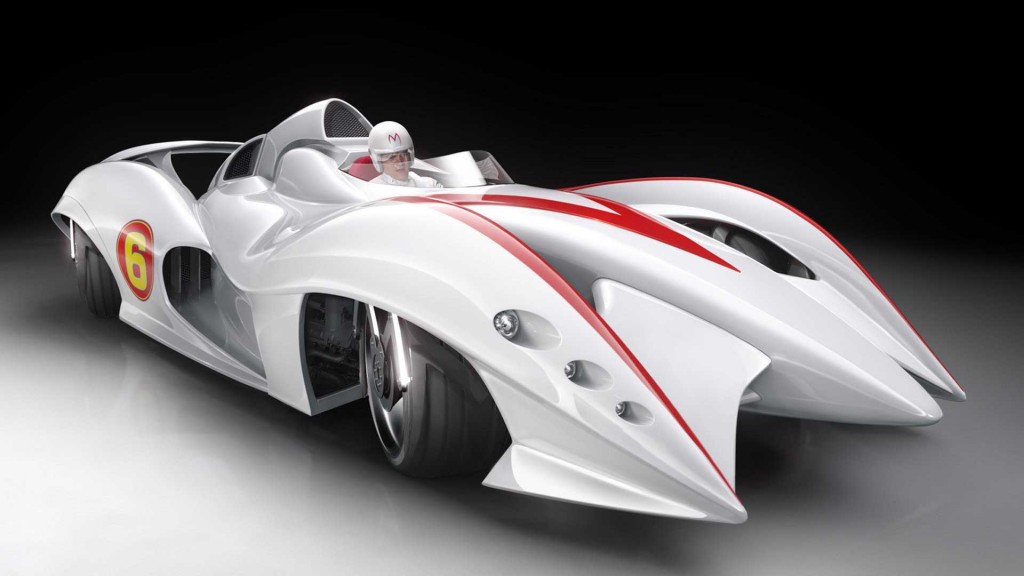 The critics, however, are ripping into Speed Racer like starved coyotes pouncing on a crippled rabbit. Typically I’m quite forgiving of differing opinions; film is art at its most subjective, and one man’sCitizen Kane is another man’sShowgirls. But the gloves come off with this one. The critics’ middle-aged rabid cynicism is boiling to the top of their pathetic little pots, and their diatribes against Speed smack of the all the graceful rantings of an old codger stewing on his porch, telling the kids to get the hell out of the sprinkler. They are, unequivocally, wrong. Mistaking the giddy visuals for garish bombast and discrediting the inspirational story for heavy-handed pretentiousness, they’ve missed out on the whole point: to convince children that their dreams are worth fighting for and to convince adults that they can still be children. The film succeeds magnificently on both counts, but the critics are having none of it. Your ability to enjoy this film is directly proportional to your ability to dump your cynicism at the door, and the critics are clinging to theirs with all the subtlety of a corpse’s death grip. Enjoy your vitriol, boys. Maybe you’ll choke on it when next you’re out kicking puppies and punching newborns. 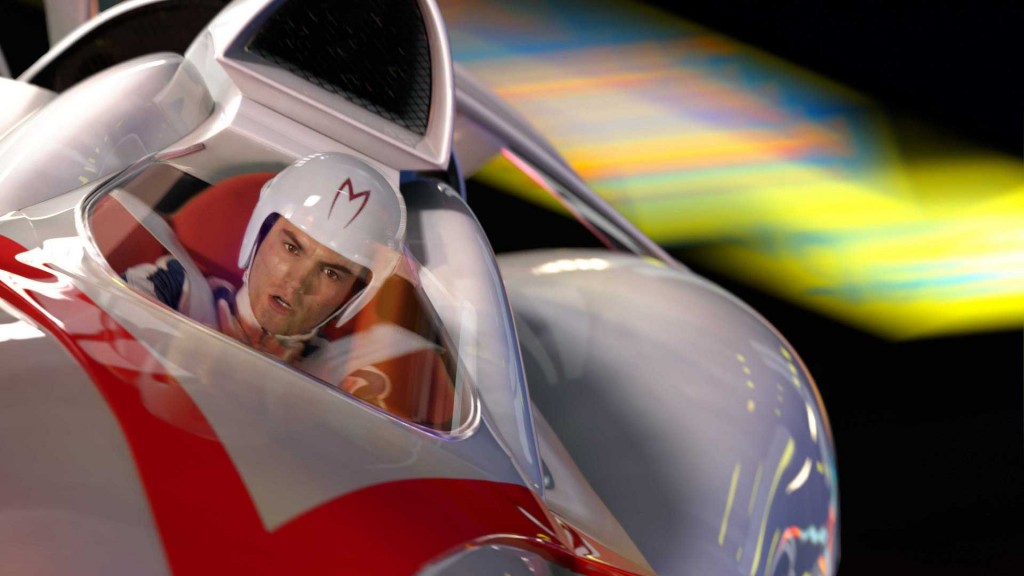 Speed Racer is a return to the innocence and unashamed idealism of childhood, the wide-eyed wonder you unknowingly embraced until adulthood and stress and responsibilities and the harsh realities of life sapped every ounce of it out of you. It is the first time you rode a roller coaster, when you started down that first impossibly high drop and your stomach plunged while your adrenaline rocketed, and at the end you sprinted to the end of the line to ride it over and over and over again. It is the pure, naïve fun you had as a child when you built architecturally unsound castles from blocks and your G.I. Joes battled one another among the ramparts, noble good and wicked evil locked in epic combat, with the good guys always, always triumphing despite hopeless odds. It is the look of sheer joy my daughter gets in her eyes when she sees a puppy and everything fades into the background except petting and playing and being licked in the face until she can’t stop laughing. At that moment, no one can convince her that puppies aren’t the most wonderful things in the entire world.

As Speed Racer approached the finish line in the final, breathtaking race, I felt my chest swell with anticipation and excitement. I wanted him to win—no, I needed him to win! Often times a film is so good, so immersive that I forget I’m watching a movie and lose myself in the story, but never before like this. It was a borderline religious experience, and I’m almost certain I involuntarily yelled out a guttural cry of joy in the climactic moment, utterly oblivious to the people around me. My enthusiasm knows no bounds, I’m still on a cinematic high 24 hours after seeing it, I’m counting down the hours before I can see it again, and my inner child doesn’t care what anyone else thinks. Speed Racer is the picture of the year and one of the greatest films I have ever seen.