One of the charges often leveled against film critics is that they are “out of touch” with American audiences. The proof that is generally cited comes from placing each year’s average critical top 10 list and its top 10 grossing films side by side and seeing how closely they match. For example, 2007’s critical darlings, No Country For Old Men and There Will Be Blood, respectively placed 36th and 66th at the box office. There are reasons for this discrepancy, primarily bad movie burnout amongst critics and the ever-present tension of art vs. entertainment, but I’ve always prided myself on being an unpretentious critic who loves his trash as much as his mise-en-scène (I did say I was unpretentious, right?). However, sitting in the theater watching Step Brothers, I wondered if I had finally crossed over to the other side. The audience was eating up every second of it like a lottery-winning coke fiend and I was just sitting there, wondering where that piece of food stuck behind my back molar was from, how long it had been there, and gosh it’s really about time I made a dentist appointment. 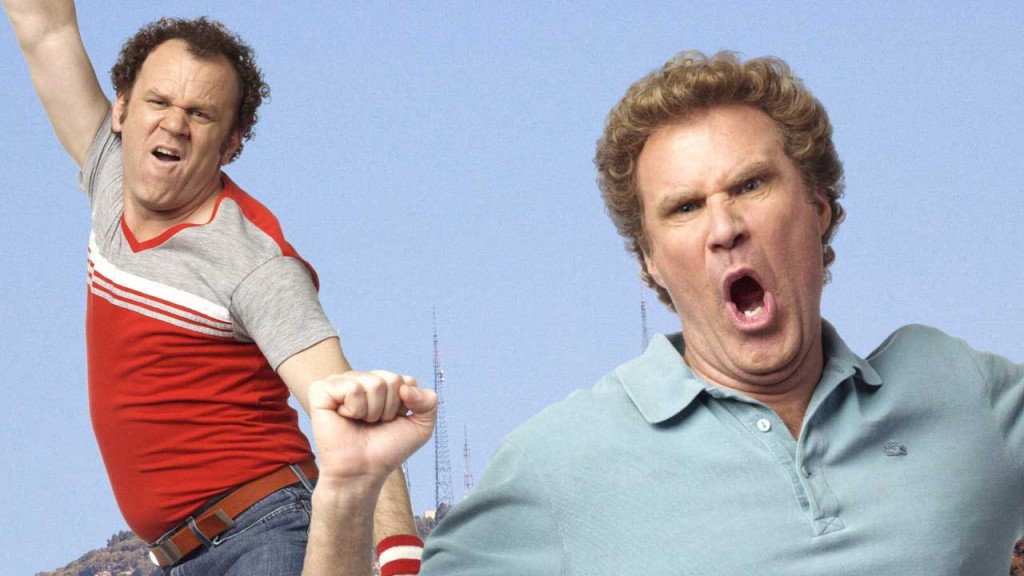 John C. Reilly as Dale and Will Ferrell as Brennan.

The film begins promisingly enough. Our introduction to the setup, in which two single parents (Mary Steenburgen and Richard Jenkins) get married and bring their two 40-something stay-at-home children to live together, takes mere minutes and is a shining example of taut, economical storytelling. When Brennan (Will Ferrell) and Dale (John C. Reilly of Walk Hard: The Dewey Cox Story) locked eyes for the first time across the yard to the strains of LCD Soundsytem’s North American Scum, I was surprisingly charmed. The dialogue, acting, cinematography, and music (heck, even the titles) effortlessly sucked me into the film and fully engaged me with the hokey premise. The scene felt like a combination of Wes Anderson and Napoleon Dynamite, and I found myself wondering, “Could this actually be good?” 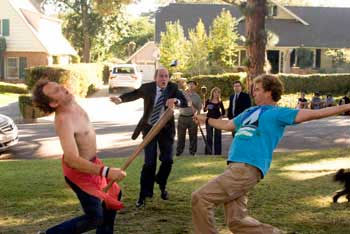 This scene was funny… at least it was the first time I saw it.

No. No it couldn’t. Director Adam McKay quickly squanders whatever cache he earned in the first 10 minutes by dragging us down into a bog of repetition, redundancy, and sameness, and for those of you reading along with your thesaurus, you may have seen what I did there. The film offers nothing more than the flimsy premise that was promised in the trailer: two middle aged man-children hate one another before discovering that they are exactly alike. Exactly. Alike. The End. Almost every joke and gag riffs on that one idea (which, the production notes tell me, evolved from the dinner table scene in Talladega Nights), and there are only so many shouting matches/brawls/arrested development gags/scrotums that one can take before one’s molars become more interesting in comparison (and no, that last item was not a typo).

The redundancy doesn’t just lie in the film’s premise, but also in its vulgarity. The last time I saw a film that needed its mouth washed out with soap this badly was Clerks. The obscenities in Step Brothers are positively relentless. When did inserting the f-bomb into a sentence automatically make it funny? And when did shouting that sentence make it even more funny? And when did stringing together aforementioned shouted f-bomb-laced sentences become funnier still?

And no, the language itself isn’t the issue (although Step Brothers has given me hope that I’m not nearly as desensitized as I had previously feared). Superbad, which I would never discuss in polite company, nearly broke a few of my ribs I laughed so hard. The difference here is that the vulgarity is hung on a paper-thin foundation, and without sympathetic characters or a narrative that engages you in the slightest (i.e. The 40 Year Old Virgin or Knocked Up), all of the profanity ends up eating away at your soul like battery acid. By the end I was mentally and emotionally exhausted. 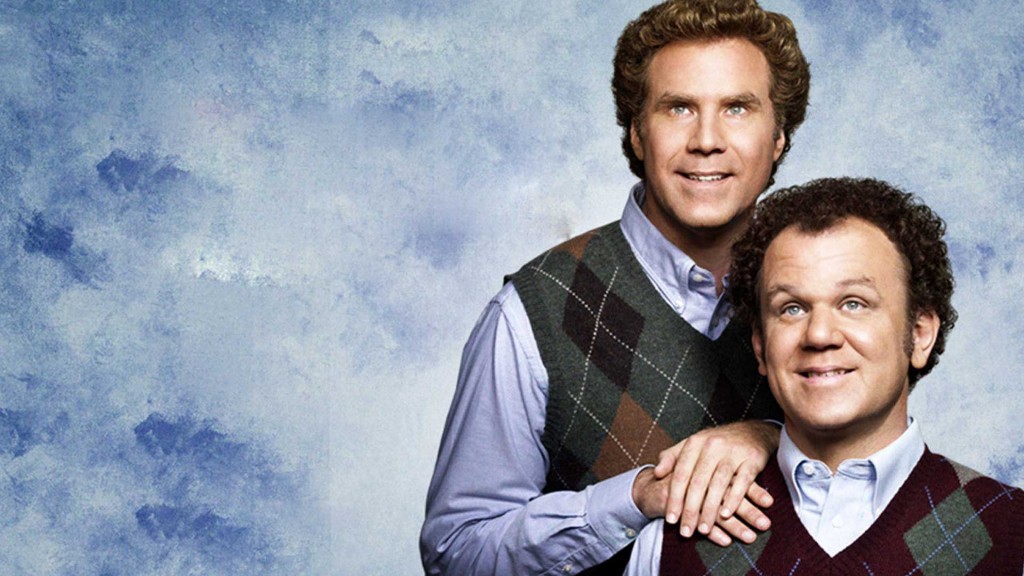 The t-shirts in this film are, admittedly, awesome. Costume designer Susan Matheson is the queen of the Salvation Army.

I must admit there are some genuinely funny moments. The brothers’ efforts to sabotage their parents’ plans to sell the house (involving racially sensitive costumes and asphyxiation) had me doubled over, and two gloriously stupid sleepwalking sequences were visually priceless. But those moments were primarily physical comedy, whereas the majority of the film’s humor relies on the characters screaming profanities at one another in various states of undress. That’s just not my bag, baby.

In the interest of full disclosure, McKay’s previous Ferrell-Reilly vehicle, Talladega Nights: The Ballad of Ricky Bobby, made my heart hurt. Numerous people disagreed with me, to the tune of $148 million at the box office, and the audience at Step Brothers was no different. I heard “epic,” “amazing,” and “that was way better than I thought it would be” as I left the theater. Suffice to say, this movie is going to reap great swaths of bank from the pockets of American audiences, and as much as I would like to, I can’t discredit the taste of millions of people. There is undoubtedly a market for this film, but I am (happily) not it.