At some point during the month, Daniel Getahun posed the rhetorical question to me, “Who ever thought it would be a good idea for me to write about film noir?” Which, of course, is just crazy talk. This is his third and final treatment for the month (following The Big Sleep and The Asphalt Jungle), and I think it’s his best.

Of all the rich detail in the first three minutes of Alfred Hitchcock’s Strangers on a Train, it’s a lightning-quick gesture made by our protagonist, the tennis pro Guy Haines (Farley Granger), that cuts right through to me.

We’ve all been there before. Maybe not on a train, but certainly on a plane. You find your seat, get comfortable, and settle in with your reading material. All is well until some chance variable acts as a catalyst – maybe it’s a report from the captain, or the flight attendant distributing beverages, or a passenger in your row needing to get by your legs. Before you know it, sure enough, you’re out of your book or magazine or music or movie and into a forced, awkward conversation with the way-too-chatty person next to you (the same one who just slurped down the last of the Venti Double Latte that’s now jammed in the seatback, hovering over your leg and threatening to stain your pants if you move your leg two inches to the left). Often, you end up telling this complete stranger much more about yourself than you expected to, spilling very personal details about your work or family or hopes and dreams. It’s a truly bizarre human encounter that happens in almost no other circumstance; anywhere else it would be considered inappropriate, but you’re never going to see this nameless person again in your life, so what’s the difference? 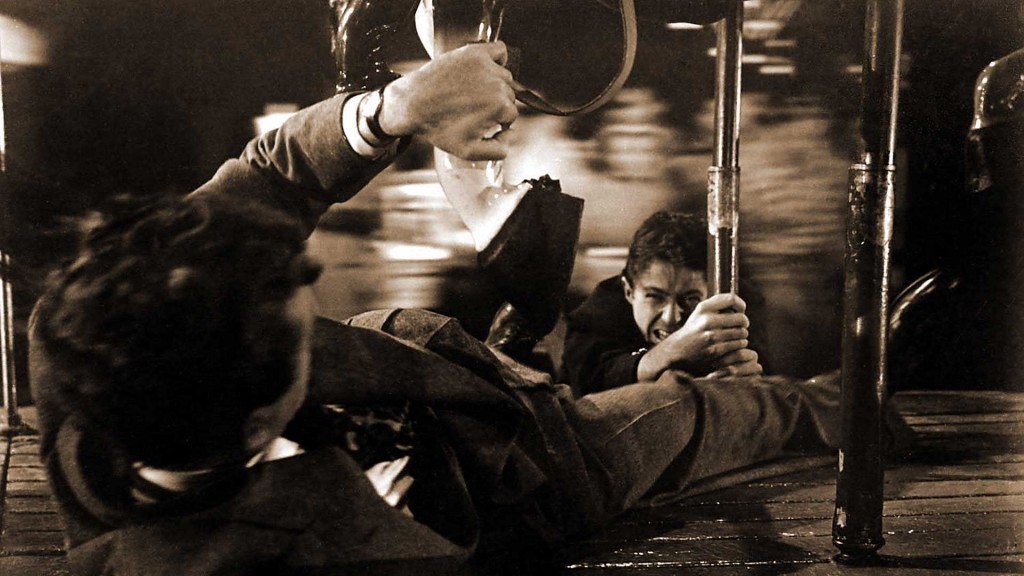 If I sense that I’m about to enter into this uncomfortable, never-ending game (it only becomes more awkward if you stop early and are left sitting next to them for two more hours), I inevitably resort to The Move. You know the one: raise of the eyebrows accompanied by a pursed smile, followed by a sigh and a glance in a different direction.

Unfortunately, this stranger on the train is not going anywhere. Worse, the consequences of this encounter are, unbeknownst to Guy, deadly serious, for he’s just met one of Hollywood’s most wickedly strange villains, the sexually frustrated lunatic Bruno Anthony (Robert Walker). Their “chance variable” was an otherwise innocent brush of their shoes across the aisle: Bruno’s the flamboyant, two-tone wingtips, and Guy’s the understated, low-polished loafers. I’m not that much of a detail hound; their shoes are the only things we see in the first 90 seconds. It’s an amazingly simple introduction by Hitchcock that’s shocking in its effectiveness in hooking the viewer, and a technique that brilliantly matures as we come to more intimately know the wearers of those shoes. 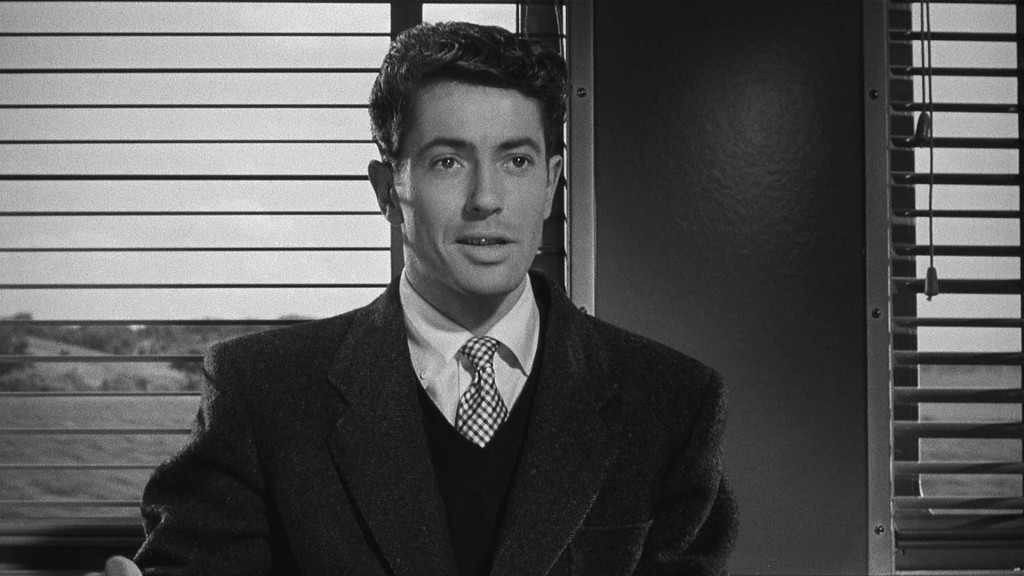 If you can’t tell something is odd about Bruno Anthony from the first words out of his mouth, then you might need to retune your social radar. Bruno is handsome, flirtatious, cloying, charming – he’s too good to be true, and as he gently but annoyingly badgers Guy into having lunch with him in his private dining car, his sweetness begins to sour into something altogether macabre. Aware of Guy’s marital troubles through the tabloids, Bruno proposes that the two swap murders: Bruno will eliminate Guy’s unfaithful wife if Guy dispatches of Bruno’s overbearing father, thus removing motive from the respective murders and leaving them both in the clear. It’s a brilliant plan, but Guy, disturbed by Bruno’s forthrightness and general manner, politely brushes it off and gets off at his stop.

Much has been made about the adaptation of Patricia Highsmith’s first novel. Hitchcock originally hoped that Dashiell Hammett, author of The Maltese Falcon, would be available to adapt Strangers on a Train for the screen, but an apparent scheduling error by Hitchcock’s secretary ruined the meeting, leaving him without a screenwriter. He ended up working with (and infamously butting heads with) Raymond Chandler, author of The Big Sleep and winner of an Oscar for co-writing Double Indemnity with Billy Wilder. These are interesting connections, but the point is, Highsmith’s novel reportedly had strong homosexual overtones that were left out of the film. Walker does career-defining work as Bruno Anthony, but you never get the blatant sexual hinting that was present in, say, The Talented Mr. Ripley, which was also adapted from a Highsmith novel.

Some people may pick up on it more than others, but in any case, Hitchcock gives us some time to become a little bit more familiar with Bruno and Guy in their natural settings and away from each other. We learn that Guy hides a somewhat violent temper behind his handsome smile. He’s loyal, privately passionate, and eventually accepting of the fact that he may have to make some moral compromises to get himself away from Bruno. At Bruno’s house, we see him as an immature brat living at home who patronizes his oblivious mother and irritatingly provokes his disapproving father. Guy and Bruno have more in common than may appear on the surface, but it’s clear that the two-faced Bruno is the more mentally unstable of the two, occasionally living in his own reality and seemingly juggling multiple personalities. 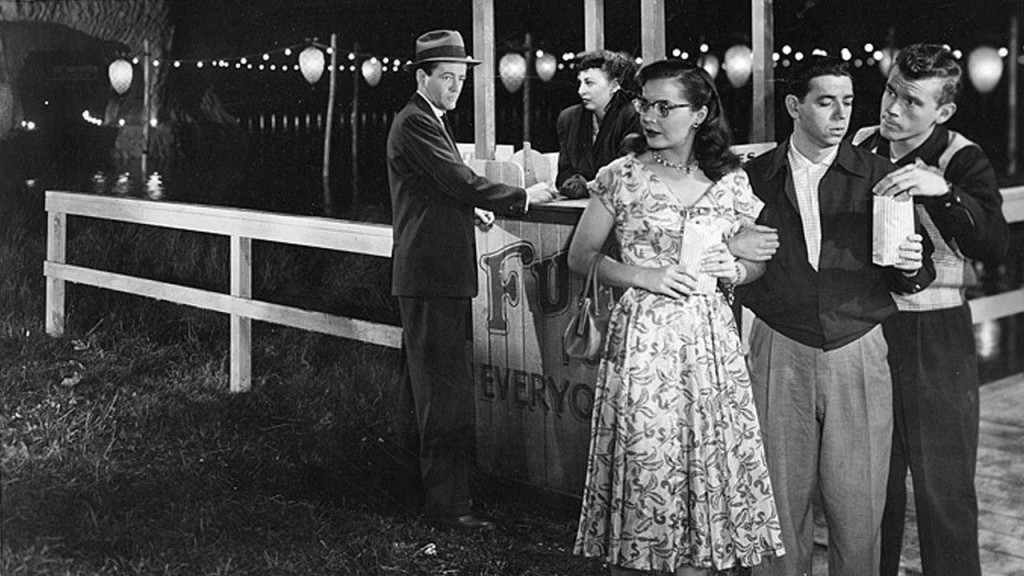 It shouldn’t come as a surprise, then, that without any warning and without any agreement from Guy, Bruno is off to casually murder Guy’s wife, Miriam. What follows is one of the more agonizing stalking scenes that you’ll ever see. Beginning on a bus outside Miriam’s brownstone, Bruno playfully follows her and her two male companions to and then around the local amusement park, where he repeatedly makes flirtatious eye contact with Miriam as he copies their every move, save for a quick pit stop for bag of hot popcorn. The suspense reaches a fever pitch by the time we enter the Tunnel of Love, through which little boats bring hormonally charged couples to a private island about a hundred yards away. Hitchcock is playing with us as much as Bruno is playing with Miriam, and her strangling almost surprises us, perhaps because we expect a loud and dramatic attack after all that build-up, something in the manner of Janet Leigh’s demise nine years later in Hitchcock’s Psycho. 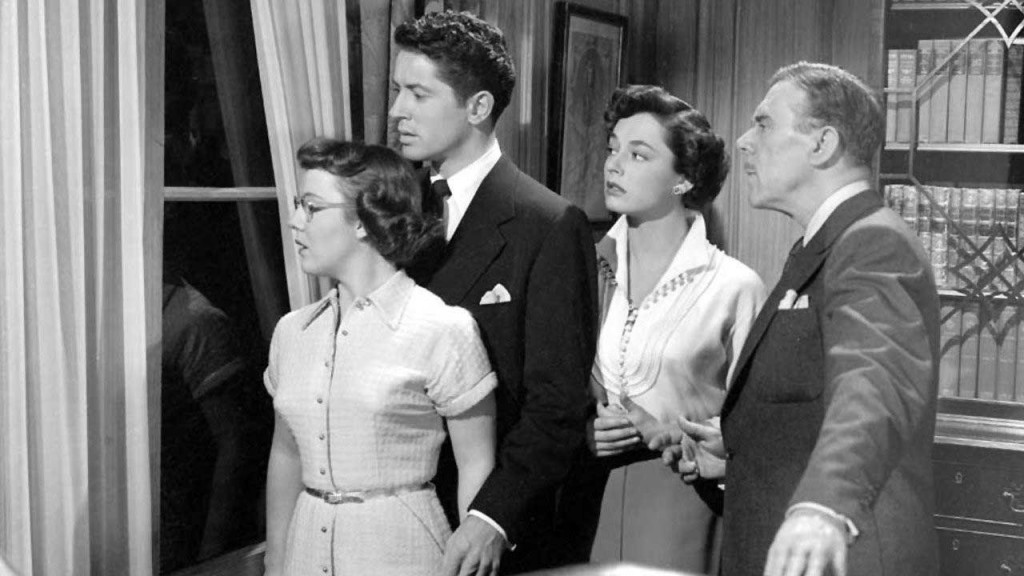 Not that Miriam’s strangling isn’t still a horrifying affair. In what is likely the most iconic scene in Strangers on a Train, Hitchcock directs the camera toward Miriam’s glasses, which were dashed to the ground when Bruno grabbed her. In the reflection of the lens, we witness him choke the life out of her until she collapses to the ground. He collects the scant evidence and casually heads back across the water in his boat as we hear Miriam’s companions discover her limp body. In a bit of biting irony, Hitchcock shows us Bruno helping a blind man cross the street as he leaves the amusement park and head’s to Guy’s place. It just adds to the complexity of Bruno’s character, as do the debilitating flashbacks he has throughout the rest of the movie. Is it possible Bruno didn’t realize what he was getting himself into with this murder deal, either?

The rest of Strangers on a Train involves Guy struggling to escape this blackmail, and we find ourselves recognizing him as an archetypal Hitchcock character, wrongfully accused with no easy way to clear his name (word has it that this phenomenon comes directly from the mistreatment Hitchcock experienced by his father during childhood). Guy knows that Bruno won’t lay off until he agrees to kill Bruno’s father, and he becomes more desperate as the situation consumes every aspect of his life. Bruno finds him in public, stalks him from afar, attends his tennis matches and even sends him a gun, a house key, and a diagram of his father’s bedroom. Furthermore, Bruno infiltrates Guy’s inner circle, not only meeting with Anne Morton (Ruth Roman), the Senator’s daughter that Guy hopes to marry, but also creeping out her little sister, Barbara (wonderfully played by the director’s daughter, Patricia Hitchcock), who bears a disturbing similarity to Miriam. 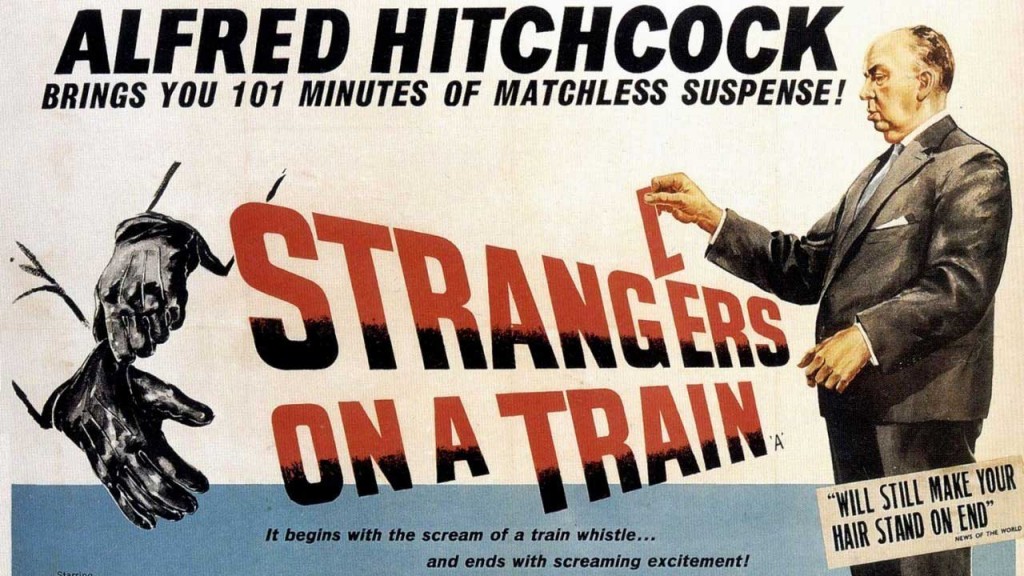 It’s nothing new to accuse Hitchcock of misogyny, but it’s hard to make a case that the female support in the cast has much to work with. Roman is primarily kept busy grimacing, frowning, taking deep breaths and looking altogether helpless, while Hitchcock’s own daughter is mostly around to make frightened faces. Was this unfair on the director’s part? Some may say so, but looking at the big picture I would contend that this story is only meant to focus on Bruno and Guy, and the film lags when it spends anytime away from these two. For example, I certainly wasn’t getting anything from the awkward romance between Guy and Anne.

Hitchcock makes up for any slow moments with his sure-handed direction, however, and fully earns his title as the “Master of Suspense”. In addition to the nightmarish amusement park stalking and the thrilling carousel climax, there is also a stunning scene in which Guy sneaks into Bruno’s house – not to kill Bruno’s father, but to tell him that his son is a lunatic. Hitchcock’s use of shadows, foreground focus, subtle music and a great big dog make for edge-of-your-seat suspense. Guy doesn’t leave the house any more easily than he arrives, however. Bruno walks him out of the house at gunpoint, threatening to do something much worse than kill him. We know that Bruno can’t kill Guy, of course, because he loves him; “I would do anything for you,” purrs Bruno as he aims the gun at Guy. It’s a cat-and-mouse game that we’ve seen in countless movies, from Cape Fear to Fatal Attraction to The Fan toThe Cable Guy.

It was this performance as a charming psychopath that would earn Robert Walker rave reviews and acclaim from his peers, but no awards. After Strangers on a Train wrapped in 1951, Walker completed principal photography on My Son John but tragically died before reshoots began. His personal life off-screen was as tumultuous as Guy Haines’ personal life in Strangers on a Train, and Walker had a history of drug and alcohol abuse. On August 28, 1951, he died of an overdose and allergic reaction to a prescription sedative he took while intoxicated. The similarity in the circumstances between Walker’s death and Heath Ledger’s are breathtaking.

Strangers on a Train isn’t considered Hitchcock’s finest film, but it’s hard to find many faults with it. The production is similar to other noir films of the era, but he obviously adapted the noir to his filmmaking style, and not the other way around. The story, on the other hand, is a bit of an outlier when compared to the others featured this month. There is no femme fatale, detective, hooligan, or crooked cop. Just one crazy guy stalking another. As such, it is perhaps one of the most suspenseful of all noir, and the small cast allows us to more intimately connect with the main characters. By all accounts a Hitchcock classic, Strangers on a Train is the kind of movie that will make you think twice about striking up a conversation with the passenger next to you.

The trailer for the film blares, “You’ll talk to your friends about it, but you’ll never talk to…Strangers on a Train!”

You got that right. If I can help it, of course.