Three years ago, I made the acquaintance of a little horror picture called The Exorcism of Emily Rose. I didn’t walk in with anything resembling high expectations – history told me that horror films about demon possession were, as a rule, terrible (thanks to the fact that genre-definer The Exorcist couldn’t possibly be improved upon, of course), and director Scott Derrickson’s only previous credit was that direct-to-video classic Hellraiser V: Inferno – but I walked out pleasantly surprised. The film was a funky little exercise in eclecticism – combining courtroom drama with spooky atmosphere and jump scares – plus, it spoke somewhat directly to the times, and while it might not have reached Bergman levels of profundity, it surprised me with its depth of emotion and it even made me reexamine bits of my worldview. It wasn’t a particularly well-reviewed film (though it did make the Chicago Film Critics Association’s list of the “Hundred Scariest Movies of All Time”), but it did manage to change the way I thought about horror movies, and – most importantly – it got me interested in Derrickson.

Well, perhaps that interest was a bit misguided. Or perhaps he’s hit a sophomore slump (this being his second theatrical release). Or maybe he’s simply not at his most comfortable working with a script he didn’t write. Or (most likely) he simply can’t make a great film when he’s not working with great talent. But for whatever reason, his latest – a remake of the 1951 science fiction classic The Day the Earth Stood Still – just doesn’t make it over the bar he’s set for himself. 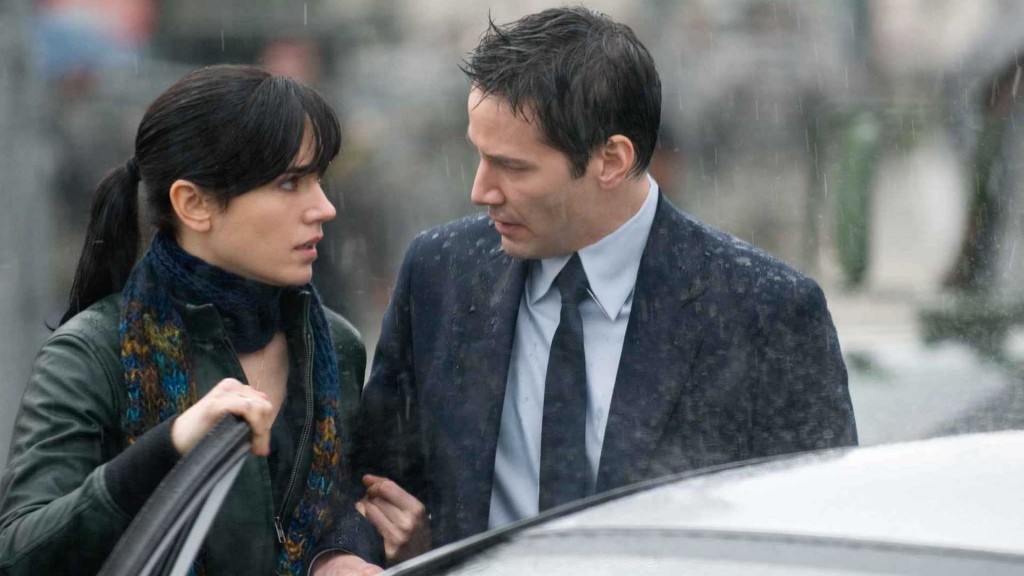 Talk to your kids about smoking. Or some superior alien race will do it for you.

Acting talent seems to be the biggest culprit here. When he made Emily Rose, Derrickson somehow managed to recruit two of the best character actors available – Tom Wilkinson and Laura Linney – in addition to talented newcomer Jennifer Carpenter. Even when the script faltered, the cast was able to save it with nuanced acting and genuine emotion (in addition to some astonishing body contortions – which Carpenter apparently did herself). With his latest film, we get stuck with Keanu “Ted” Reeves and Will Smith’s son. With that in mind, I can’t believe I ever imagined the project wouldn’t fail.

Now – to be fair – Reeves might actually be one of the better parts of the film. As he’s proven over and over again since Bill and Ted’s Excellent Adventure, he has a serious knack for looking bemused, bewildered, and confused (perhaps this is why the first Matrix was popular but the other two weren’t – once he figured out what was going on, his character ceased to be interesting) – and of course, in the new Day, he has every opportunity to do this, since he plays Klaatu, an extraterrestrial who was recently reborn in a human body in order to warn humanity of its impending destruction. Watching him figure out how to work his arms and legs isn’t without its charm, and the way his character communicates badly with the surrounding humans fits in perfectly. The problem, of course, is that he’s one of three main characters here – and, as such, he has to grow and change.

It’s a change that’s impossible to accept, since it’s nearly impossible to determine exactly what precipitated it – especially with the lukewarm performances we get from his two costars. Jennifer Connelly arguably does her best here, but the script gives her little more to do that blubber repeatedly about how humanity deserves a second chance. As for Jaden Smith, the less said about him, the better. He won some acclaim for The Pursuit of Happyness (which I admit I haven’t seen), but nothing he does here rings true. The role calls for a child who is deeply wounded by the death of his father and mistrustful of his stepmother; unfortunately, he can’t seem to fathom even half that depth of emotion. He comes off as just another child actor trying to get by on apple-cheeked cuteness – the absolute worst thing that could have happened to the role. Even when the script should work here, the actors manage to bring it down. 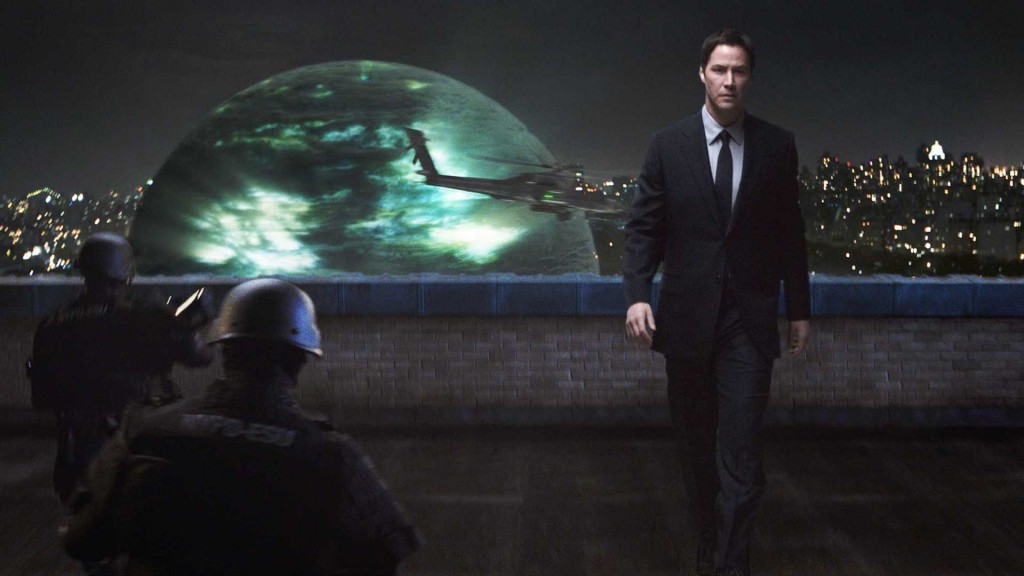 I’m going to ask you some simple questions. First off: Why, exactly, did we need to remake this film?

This is all terribly unfortunate, since The Day the Earth Stood Still definitely had the potential for greatness (no matter how ill-advised the remake was in the first place). The special effects are arguably some of the best to be put forward this year, striking the perfect balance of 1950s cheese and 2000s whiz-bang CGI (with just a dash of Close Encounters of the Third Kind) – in other words, they effortlessly pull off what Indiana Jones and the Kingdom of the Crystal Skull tried so desperately to do just a few months ago. The modern interpretation of Klaatu’s robot Gort is a thing of terrible beauty, and probably as close as they could have come to evoking the same feelings that the original might have in the 1950s. The initial, wordless encounter between Klaatu and Helen (Connelly’s character) is a truly emotional experience. And when humanity’s impending doom is finally unleashed, it’s a sight to behold. Too bad none of it means anything.

More than any other film, The Day the Earth Stood Still reminds me of Roland Emmerich’s clunker 10,000 B.C., which came out earlier this year. Like 10,000 B.C., it has an undeniable beauty – it makes you believe its action – but it fails to connect emotionally, or even thematically. While 10,000 B.C. was possessed of a bland New Age formula, however, The Day the Earth Stood Still continues Derrickson’s habit of dipping into Christian mythology – here telling the story of an all-powerful being who must sacrifice himself to save humanity from, paradoxically, his own judgment. Unfortunately, this is just another theme that gets lost in the muddle – and while it’s nice to see Derrickson attempting something a bit more complex than Emily Rose’s themes of faith vs. skepticism, bad acting and bland pacing ultimately do it in. 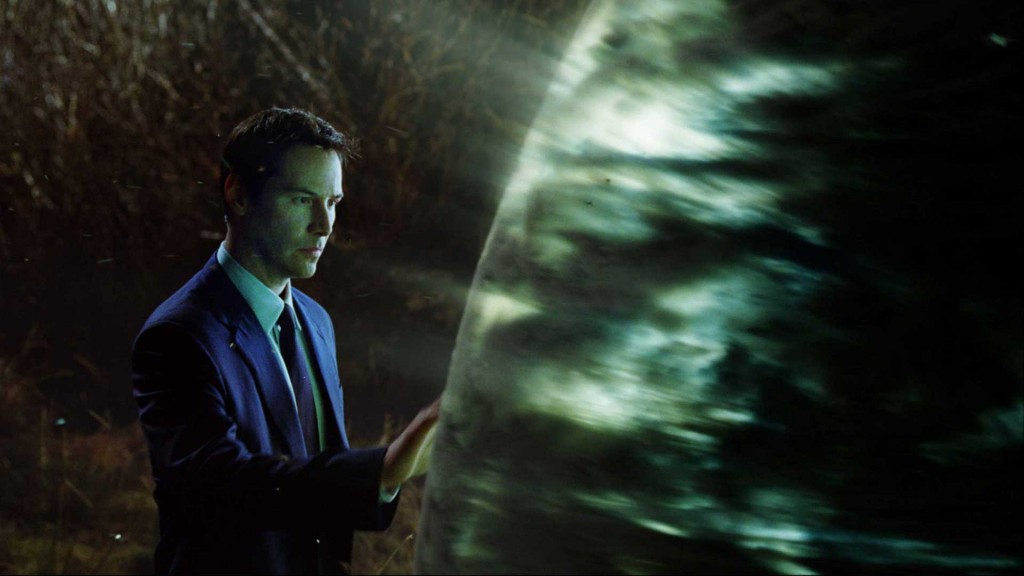 The spaceships have been upgraded once or twice since 1951. (Now they have cupholders, which really should have come standard in the first place. Why won’t Detroit acknowledge the needs of the common extraterrestrial?)

It should go without saying, of course, that the original film is by far the better choice here. What’s frustrating, though, is that this new version could have, like Peter Jackson’s King Kong a few years back, been a colorful fantasia on the motif established by the original. Instead it tries too hard to update it, deviates too far from its themes, and simply fails to develop its characters. In this, it does a disservice not only to the original, but also to itself. Those who loved the original will no doubt be angered, and those of us who are true believers in Derrickson’s skills are left with nothing to do but wait for his next project, which is – I kid you not – an adaptation of John Milton’s Paradise Lost. So, without any irony intended: let’s all pray he doesn’t muck up that particular classic quite as much as he did this one.