Before its release, I lamented what a shame it would be if director Joe Wright’s new film The Soloist became a slimy sob story complete with incessant screaming at life’s hard knocks and a mopey climax.  The premise does sound rather conventional: Struggling news reporter meets homeless, mentally ill, musical genius and uses the press to bring the musician’s story to the public eye.

Well, The Soloist’s story made me sob, but not for the reasons I feared it might. The film tells the story of an oddly calculated friendship between two very different men, but it doesn’t pretend for an instant that doing your best to help a troubled person can cure mental illness or that music, however powerful, can cause a permanent turnaround for a wayward life.

On the contrary, The Soloist is one of the most mature films of its kind, tackling issues of mental illness, homelessness, and human responsibility with sensitivity and tact.  The true story of Los Angeles Times reporter Steve Lopez and cellist Nathaniel Ayers, the film is honest, true to itself, and never tries to be something it’s not. 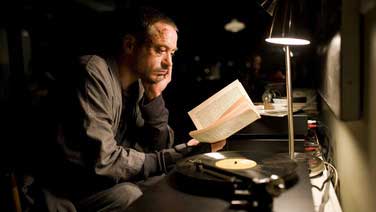 Steve Lopez (Robert Downey Jr.) first encounters Nathaniel Ayers (Jamie Foxx) playing a two-stringed violin in a park beneath a looming statue of Ludwig Van Beethoven.  Ayers is disheveled, dragging a shopping cart full of all his earthly belongings, and wears a yellow visor emblazoned with the names of classical composers.  Lopez initiates conversation, but Nathaniel turns away, talking rapidly in his light voice about many things, but always mentioning Beethoven.  It’s always Beethoven with Nathaniel and it’s clear to Lopez that he isn’t entirely sane.

Lopez is fascinated by this chance encounter and due to a dearth of column subjects, composes a piece about his introduction to Nathaniel Ayers.  He gets him connected with the Lamp Community for the homeless in Los Angeles and eventually finds an apartment where Nathaniel can have private cello lessons and practice in relative peace. 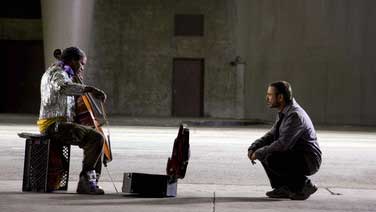 But Nathaniel’s mental illness is ever-present.  When confronted with the complete silence of a new apartment, the voices in his head shout, scolding him and telling him that he is “of no consequence.”  A tasteful selection of flashbacks show the genesis of his affliction, from the early whisperings heard during his childhood in a grimy New York basement to the unbearable cacophony during his short stint at The Juilliard School.

Nathaniel wants Steve in his life one moment and wants him out the next.  His mind is in a state of constant indecision, but Lopez’s personal life follows much of the same path.  He’s in an on-and-off relationship with a co-worker that produced a child 20 years earlier and he’s caught in a cycle of selfishness that can’t seem to be stopped.

Foxx’s performance is volatile but subtle; he’s not begging for awards, but it is a very fine piece of acting, obviously crafted with much thought.  This delicacy momentarily makes even his afflicted character a joy to watch and it comes as a surprise when he explodes with rage at the beginning of the film’s final act. 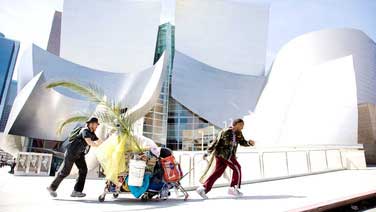 The moments when the film soars are the ones that invoke pleasantly arranged classical music, but don’t worry: These invocations of Beethoven and Bach will not grate on the ears of classical music lovers who have grown tired of hearing the same classical pieces unendingly repeated in film after film.  You’ll find no tinkly “Fur Elise” or droning “Moonlight Sonata” in this film.  You will, however, find a moment like this: Lopez and Ayers are standing on the sidewalk of a busy Los Angeles underpass; Lopez has just brought him a donated cello. Nathaniel begins to play the cello part of a Beethoven symphony.  The sounds of the street are cancelled out and we hear only the cello; we see only his fingers on the strings, his eyes glazed with passionate intensity.   Without immediate notice, the orchestra slips into the soundtrack to accompany the soloist and the passion tucked away in the dark for so long is finally pushed into the magnificent light of day.

As if the spiritual intensity of this moment weren’t enough, the camera quickly pulls away from the two men and, in one swift and blissful move, soars into the sky above Los Angeles.  In an instant, we’ve been transported into Nathaniel’s psyche as his soul soars above the confines of his illness and into the clouds.  It is a moment of pure, unadulterated grace.

Joe Wright has a knack for moments like this. His directorial vision breathes needed life into Susannah Grant’s mediocre screenplay.  The sound design and editing style at times feels like an experimental film, a brave move for a major studio release.  But Wright isn’t pretentious—he’s imbued the subject matter with pathos and poise enough that his creativity doesn’t seem stilted.

The film gets distracted with ham-fisted politics when the characters don’t take the forefront, but the politics don’t hinder us from seeing that both Steve and Nathaniel constantly hold in view the possibility of new, better life.  Neither of them achieves this completely by the film’s end; it remains a dim possibility either because of political red tape or the shame of unwise personal choices.

But the darkness doesn’t have to abide … and this elegiac, somber film more than proves the matchless worth of a steadfast spirit of hope.