Traitor occupies the unenviable limbo between an exciting episode of 24 and a mediocreBourne clone. Moderately entertaining at times, sermonizingly stuffy at others, it manages to challenge one’s ability to remember it afterwards. If I were to damn with faint praise (which I am about to do), I would say it is worth a rental. 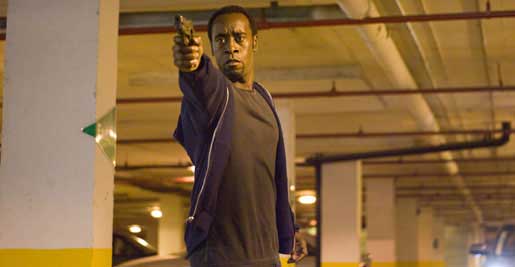 Writer/director Jeffrey Nachmanoff (who penned The Day After Tomorrow – I know, not a legacy that inspires filmgoing confidence) brings to life a story from the mind of Steve Martin (I know, not the expected breeding ground for espionage thrillers). Don Cheadle stars as Samir Horn, an ex-special forces officer who wheels and deals explosives on the international black market, Guy Pearce is the FBI agent who hunts him down, Jeff Daniels is the government operative who might be running a covert op, and Saïd Taghmaoui is the jihadist who befriends Samir over a game of chess in a crumbling Yemeni prison. The pot of global intrigue is stirred in flavorless ways, leading up to a massive terrorist attack on US soil and two unexpected twists, one that is emotionally surprising and one that becomes logically defective the moment you have more than 10 seconds to process it.

Is Samir good/bad, undercover/terrorist, Muslim disciple/extremist? The film attempts to tease us with his true colors throughout the entire runtime, but the outcome remains annoyingly obvious. Additionally, the script takes long pauses to turn to the audience and spout uninspired religious clichés like “Every religion has more than one face.” Nachmanoff appears to believe that he can be provocative and politically correct at the same time (“We flirt with controversy because the terrorists are Muslim extremists but it’s OK since our hero is a good Muslim”), but the two are mutually exclusive. Rather than focus on being a great thriller, Traitor ends up buckling under the strain of its desire to people-please. You can even tell the film’s coda was focus grouped into oblivion; easy money says the DVD will have “Alternate Ending!” slapped all over its cover.

Want a tasty thriller? See Tell No One, or even Tony Scott’s cotton-candy Spy Games. Looking for a provocative film about competing belief systems? Try The Believer, Ryan Gosling’s supercharged acting debut. Otherwise, just wait for Traitor on DVD. Or see it next month when it’s called Body of Lies and stars Russell Crowe and Leonardo DiCaprio.