Perhaps it’s my nostalgic, somewhat romantic idealizing of the 1970’s of my childhood. Perhaps it’s the simple, but quite head-tilting fact that I actually grew up in an amusement park (stop tilting your head, it’s true – my family worked the park and I had free reign to ride anything I wanted to). Whatever the case, I rather enjoyed this film about college bound kids working at a run-down amusement park in late seventies suburban Pittsburgh. In fact I liked it quite a bit more than I ever expected to. Director Greg Mottola’s previous film (his only previous film actually) was the Judd Apatow-produced Superbad, a lowbrow bro-com replete with the obnoxia more oft than not associated with the Apatow cinematic universe. I was not impressed, to say the least, and though I wasn’t completely put off by the film, its lack of artistic merit gave me woes of anxiety when walking into the screening for the boldly titled (but ironically so, I suppose)Adventureland. Well, those anxious woes were steadily alleviated throughout this smartly written and romantically wry little film. Boy, was my face red.

Telling the story of James, a twenty-twoish college student who, when confronted with his father’s layoff, is forced to take a job at a local decrepit old amusement park in order to get next semester’s tuition bankroll. This, of course, is where he will meet the girl of his supposed dreams. Filled with a stylish (and unstylish) array of cast-offs and misfits, all with their own typically indie-cinema quirkiness, Adventureland could easily have fallen into the realm of the ridiculous (possibly even the purgatory of straight-to-video). Instead, it is raised above such muck by a relatively well-adjusted cast of characters who manage to go beyond the fiddle faddle of typicality so prevalent in such movies (much like the mundane boorishness of the aforementioned Apatow universe. In short, the wry, acerbic crowd with which it is populated saves Mottola’s film, a by-the-book rom-com in most ways.

It is the laid back, but in his best panic-mode style, Gen X (or is it Y?) sarcastic witticisms of Jesse Eisenberg, as the strange kid in a strange land that get everything started. Following in the footsteps of his (admittedly similar) roles in The Education of Charlie Banks and the wonderfully lacerating The Squid and the Whale as well as the soon-to-be released Zombieland in hindsighted perspective, Eisenberg is once again the voice of manic, jaded reason and esoteric intelligentsia. The kid is simply a blast to watch and listen to as he acts out his role as the very antithesis of what Hollywood – and the middle American corn belt and minivan set who go along with it – think of as the ideal leading man. The kid is just too smart for that kind of thing. Quirky, sensitive and full of bitter, pop-culture-referenced angst, Eisenberg – and in turn James – is not what the mass-media hype-mongers want us to see in the movies and/or on TV, but what the rest of us see when we look in the mirror everyday. 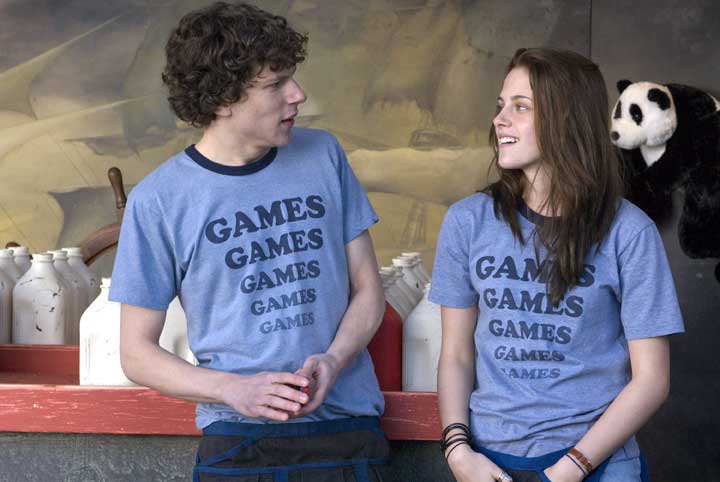 Joining Eisenberg in this playground of dehumanizing absurdities that is their park of pathos, is his femme fatale in faded jeans and ringer t-shirt, Kristen Stewart as Em, the dark, brooding girl of his supposed dreams. Stewart plays the part of permanent malaise to near perfection. This may not be so much her acting prowess (one cannot see that she has any to speak of really) as her actually being a dark, brooding girl of (somebody’s?) dreams. Cute, and rather appealing on a basic college quad girl kinda way, but just as listless as attractive.  It’s as if she were one of those emotionally-lobotomized Russian mail-order brides who just lie there in order to please their men and get their green cards. In other words, the typical twenty-something of today.  I suppose as long as Stewart sticks to roles that play on her dark, heroin (or is it meth? – I’m saying meth!) chic dullness – aka, vampire’s blood interest, depressed small town slut, Joan Jett – then she should have a strong career ahead of her. Running the acting gamut from A to B (as Dorothy Parker would likely say) should not be that hard. Of course we are lucky that her role as Em falls squarely into that two-letter thespianic spectrum.  I suppose though, this is what the role is asking for from its portrayer.  Now if only we could get her to have an emotion that does not involve just a crooked smile and cynical eye roll.

Rounding out the cast is a group of actors as mish-mashed as the characters they portray. SNL buddies Bill Hader and Kristen Wiig are on the characterizing best as the hilariously square management team of the park. The oft-maligned Ryan Reynolds plays the half-studly maintenance man who may very well be the long-lost, slightly less skeevy brother of Matthew McConaughey’s Wooderson from the contemporarily set Dazed and Confused. Martin Starr as Joel, the pipe-smoking class-centric oddball and soon-to-be best friend of James. You will also find Matt Bush as the in-serious-need-of-Ritalin Frigo (he is best known for being the thoughtless son who keeps catching the ire of his mom by throwing away all his unused minutes in those AT&T commercials). All in all, the cast (even the blase-for-blase-sake Stewart) pops with an almost ironic tone of self-awareness. A Freaks and Geeks of the amusement park set, I suppose you could say, all the while referencing not only another contemporarily set work (1981 this time) but also another Judd Apatow connection to boot.

Set in the seventies, and with a seventies aesthetic to it as well, Adventureland plays out as kitsch comedy tinged with a leering self-awareness by its always-on-the-nod-and-wink cast. It may not be perfect (but what is?) and it may play in typical rom-com territory when first explored, but Adventureland is fun once one decides to allude the surface schmaltz and go deeper into the belly of the proverbial beast. Perhaps though, it is just my nostalgic, somewhat romantic idealizing of the 1970’s of my childhood and the simple, but quite head-tilting fact that I actually grew up in an amusement park. Whatever the case may be, at least I had a fun ride. You didn’t think you would get away without a cheesy amusement park cliche did you? At least I didn’t call the movie the roller coaster ride of the summer.