You can’t kill the metal. Metal will live on.

Anvil!: The Story of Anvil opens with a bit of on-screen text that’s every bit as subtle as the first few bars of Sabbath’s “Iron Man”: “In the summer of 1984, Anvil toured the world with the biggest bands in rock: Scorpions, Bon Jovi, Whitesnake. All of them went on to sell millions of records around the world. All of them, except one.”

As you might have guessed, the “except one” here is Anvil, a Toronto-based outfit frequently credited with laying the groundwork for thrash, as well as other heavy metal trends of the 80’s and 90’s — but also one that never made a dime off of their music, and never received any degree of recognition outside of the most dedicated of heavy metal fans.

And here’s the kicker: they’re still around. 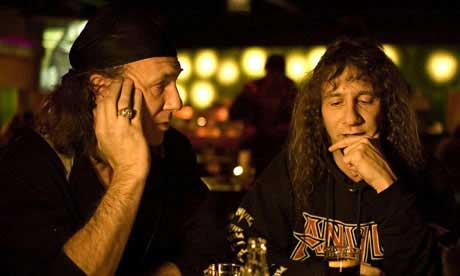 “Still around,” as in, still together as a band, still performing regularly, and still kicking out an album every so often. Their only reasonably well-selling album, Metal on Metal, was released more than a quarter-century ago, and yet the creative core of the band, drummer Robb Reiner and vocalist/guitarist Steve “Lips” Kudlow (now both in their 50’s), continue to chase their dreams of conquering the charts and becoming rock stars — and documentary filmmaker Sacha Gervasi (who used to be a roadie for the band) is here to tell their story.

After some brief interviews with Lemmy of Motörhead, Slash of Guns ‘n Roses and Velvet Revolver, and Lars Ulrich of Metallica, all of them testifying to what a huge influence Anvil was on their music, we get a cold dose of reality. The middle-aged Reiner takes us on a tour through his current place of employment: a minimum-wage-paying catering service. The idealized metal portraits that open the film are abruptly replaced with the drabness of everyday life in the poor end of the suburbs, as well as candid interviews with the two men’s long-suffering wives, sisters, brothers, and parents. What we’re left with is a sometimes-hilarious, sometimes-heartbreaking meditation on being stuck in perpetual adolescence and what happens to a dream deferred.

I wouldn’t be the first (and I certainly won’t be the last) to compare the film to This is Spinal Tap, the classic “mockumentary” released (ominously) in 1984 and directed (even more ominously) by Rob Reiner (who is, of course, no relation to Anvil’s drummer). The earlier film mocked 1980’s metal mercilessly, and, of course, 1980’s metal (with its infantile fixation on sex and violence) was certainly a deserving target. But however laugh-out-loud funny the film was, its true strength was in its humanization of its characters. Every scene felt real, and every member of the fictional band (no matter how moronic) was wholly realized and completely sympathetic. And in many ways, Anvil! manages to do something similar — an accomplishment which comes off as both a little bit easier and a little bit harder. Easier because Kudlow and Reiner really are real people (duh). Harder because they’re fifty-year-old men still pursuing a teenage dream that — at least in some sense — passed them by a long time ago. In truth,Anvil! plays like a sad, twisted sequel to Spinal Tap (sort of like Return to Oz, if you’ll allow me to reach a little). The band who embodies every cliché of 80’s metal is now old and forgotten, having been dealt a raw deal by life and left in the dust by changing musical trends. While Spinal Tap was a comedy with occasional tragic moments, Anvil! comes off as more of a tragedy with occasional comic moments. An as we watch the band embark on a disastrous tour of Europe and struggle through recording their thirteenth album, it becomes clear just how badly they yearned for the life they never received.

It’s also far more meaningful than your average rockumentary. Anvil! is a film that appreciates its subject band, but it doesn’t exist simply to enshrine them, or simply to make money off of their fans (it can’t, seeing as Anvil fans are few and far between). Nor is it t overly concerned with capturing concert footage (most of the shows take place in seedy dives where it would be impossible to get decent footage anyway), and it’s certainly not here to blow in-band conflict out of proportion (take that, Some Kind of Monster). What it does do is depict a side of music-making rarely seen in the mass media: failure. The vast majority of musical acts that begin with dreams of stardom lead to absolutely nothing, and Anvil is merely one of them.

Toward the end of the film, Reiner’s brother sums it up fairly succinctly: “He chose this. He would rather live a life of poverty than a life of mediocrity.” And indeed, that’s what seems to have occurred. In a sense, you probably have to be a metal head to fully appreciate Anvil! — I’ve never fully understood the subculture myself, and there were certainly moments when I wanted to tell everyone onscreen to get an education and wash their hair (at leastonce, guys). But in a more profound sense, Anvil! really is a must-see for anyone aspiring to be an art-maker of any sort, simply because it forces you to stare straight down the barrel of disappointment. The vast majority of people who attempt anything simply fail at it, deservedly or not. If you have a dream, the odds are wholly on the side of it not coming true.

And yet, that’s no reason to stop trying. Like This is Spinal Tap, Anvil!ends on an uplifting note with a triumphant concert in Japan. The similarity is almost definitely intended, and as with Reiner’s film, the moment transcends whatever crushing disappointments may have come before it. Music is made, people become connected to one another, and for one brief, perfect moment, the band captures a glimpse of their lifelong dream. It worked in Spinal Tap,and it works here, because the yearning for beauty — in whatever form it may come — is a universal one. And yes, moments of beauty are still worth working for, whatever the odds of failure may be.

The importance of Anvil! has been overstated a bit in much of the mainstream press, which, for the most part, is still controlled by Baby Boomers, and still fetishizes rock ‘n roll to a slightly embarrassing degree. In truth, Anvil! is probably not the undisputed classic that Spinal Tap is, and it certainly has somewhat less to say. But when I say its importance has been overstated “a bit,” I mean just that — a bit. What the film lacks in raw emotional power, it makes up for in pure substance. Anvil! is an unblinking look into the face of the lives that get left behind when the money-making establishment runs off to chase after the latest trends — and that, in and of itself, is a rare enough thing to merit a thoughtful viewing.