Before we delve into the review portion of the evening, there are three things one must first know about Away We Go. First off, Maya Rudolph is charming and funny – a first-rate comedienne. Secondly, John Krasinski is wry and whimsical – bringing his quiet brand of humanity to the role. And third, and most importantly, Away We Go is none of these things – and even less. It’s a shame really, but it’s the truth. While Rudolph and Krasinski seem near perfect for the movie – and for each other, their chemistry a palpable, breathing entity all its own – the film which surrounds them is nothing more than a shameful, cloying, pandering work of optimistically jaded, pseudo-cinematic falderal. And that is my being generous.

In all sincerity, the Dave Eggers, Vendela Vida written, Sam Mendes directed Away We Go is not really a bad film. It has some genuinely funny moments throughout. Many of these are already shown in the trailer (which seemed to play before just about every damned movie I saw for the two months prior to the film’s release!) but they are funny nonetheless. As alluded to in my opening salvo, it is not the humour aspect of the film that is lacking but rather it is when Eggers & Vida and Mendes decide to emotionally manipulate their audience that the film plummets into a proverbial pit of maudlin excess. A self-indulgent rap of indie movie cliches. It’s almost as if the film were a two-headed bipolar beast without any real instincts to know which way to better go. And that is my being generous again. 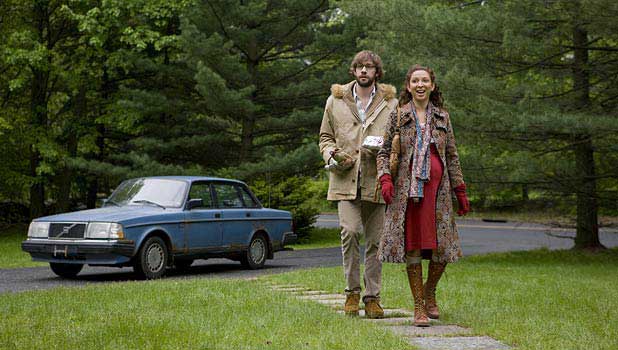 Mendes is a director that can be – and has been – a pretentious hipster doofus (American Beauty), an overly ambitious visual artist (Road to Perdition), a mistaken technical experimenter (Jarhead) and a daring would-be maestro (Revolutionary Road). With Away We Go, he has created what, by all accounts, appears to be nothing more than a mere distraction in what is otherwise a strongly well-manicured, if not somewhat stumbling at times, oeuvre. In the past, even when Mendes has failed as a director, his films have, at the very least, been born of hearty cinematic stock. Even in his most extreme cases of ridiculousness – the infamous plastic bag indulgence of the extremely over-rated American Beauty – Mendes manages to indulge also his cinematic senses. Here it seems as if Away We Go were merely a toss-off he made while having some free time between filming and post production of Revolutionary Road. I’m not sure if the dates coincide, but it surely seems that way to this critic.

Granted, Away We Go is well filmed – a visually striking panorama of road movies as it were – and therefore, even with his seeming nonchalant directorial attitude, does have delusions of cinema. And as (again) alluded to earlier, both Rudolph and Krasinski make the most of what they are given. Allison Janney and Maggie Gyllenhaal are also quite hilarious in their supporting roles as polar opposite mother figures. Unfortunately though, along comes the husband and wife team of Eggers and Vida (once called “the current literary equivalent of Brad Pitt and Jennifer Aniston” by the San Fran Chronicle – there’s an ominous foreboding if ever there were one) and with them a sickeningly sweet solipsistic screenplay, via the snarkiest of highways. Nothing more can be done for the poor film at this point. Its course hath been cast.

On top of all this schmarmy hullabaloo, the soap-sudsy wrap-up ending (daring to go even further over the precipice of self-righteous indignation than ever before in the film and having an everything will work out if only you follow your heart Hallmark moment) acts as insult to injury.  Especially to those who the film was most aiming toward – the navel-gazing in-crowd slackers who drink way too much coffee and read way too much David Sedaris. A disappointing display in its unwieldy mediocrity (never terrible but never great either – that two-headed bipolar beast rearing its ugly heads once again) considering the potential the film had from the beginning. I suppose though, such audiences never even take notice. As for me, I just took it as just another unfortunate lump on the whopper saccharine headache I was already wearing from the first 80 minutes or so.