When I was in high school, parts of all four of my summers were taken up with attending a music camp near Philadelphia. I considered this place to be the best place on earth not just because it was full of people who “spoke my language”, but because of the eccentric one-of-a-kind artists I found there. One person in particular was especially scintillating and I tried my hand at making an amateur documentary about him.

I was reminded of that little movie more than once while watching Jennifer Venditti’s Billy the Kid, a documentary about a high school boy so socially awkward and downright different that watching him on the screen can be … well … painful. 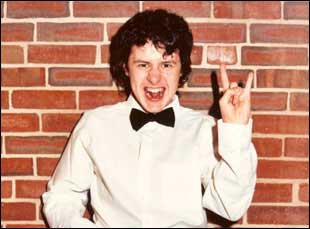 Perhaps the best description of Billy is how he describes himself: “I’m not black, I’m not white, not foreign. Just different in the mind.” The film follows him through a month or two of life as he walks the halls of school and rocks out in his bedroom to the psychedelic sounds of KISS in front of a poster of Jar-Jar Binks. He lives in a mobile home with his mother. His alcoholic father left the home when he was young and Billy is quick to say that his father is the only person he’s ever brandished a knife against.

Billy roams through his school every day heedless of the way he is perceived by his peers. An outburst in the middle of a biology lab strewn with a showering of low-to-mid-level swearwords gets him some strange looks and a scolding, but he just drags himself out of the classroom and down the hall like nothing has even happened.

Later in the film Billy decides he’s found the girl of his dreams. His first words to her? “I believe I’ve seen you somewhere.” This is followed by a comment about her wrist brace. She responds quickly, Billy says “Oh”, looks at the camera, and withdraws into the bathroom. The next day at school, he goes down to sit at her lunch table thinking he’ll immediately assimilate into her group of friends. Of course he is wrong, but it’s no matter. Here is a young man who has receded so much into his own mind that the thoughts and opinions of everyone else don’t matter one iota.

He is his own man – a budding young rocker with a brain and a future, never doubting one moment that he won’t completely succeed. This carelessness could be considered an odd form of selfish obsession, but Billy still retains enough innocence to make his motives seem pure.

What director Jennifer Venditti may not notice is that there are Billys in every American city. They roam the streets, attend summer camps, swim in the lakes, play air guitar in the playground, see movies, eat in diners, and drive down the interstates in huge Peterbilt trucks. We’ve all known them and have likely found that their endearing qualities emerge the more we interact with them personally. They grow on us over time until we become mercilessly attached to them as our very own awkwardly wonderful compatriots.

Jennifer Venditti found this in Billy P., his “friends”, and his family. It is clear that she became attached to them, but there’s rarely anything in her film allowing us to tap into those same feelings. Billy the Kid is fairly short and often interesting, but it will always be the most funny and heart rending for those who know Billy firsthand.