Every time I watch a new Michael Moore film, I inevitably ask myself – just who the hell is this guy making movies for? He acts as if he is a voice of change – showing us the moral and political indignities perpetrated against the American people by the despotic, elected (and sometimes not elected) leaders of our country. Yet, for anyone who is even the most modestly informed, not much the director spouts into his booming megaphone is any real revelation. Anyone and everyone who reads even the occasional newspaper or catches the occasional passing TV tuned to CNN or MSNBC (something other than the maniacally manipulative Fox News, that is) should know at least the basic ins and outs of what is going on in and around Washington and Wall Street. Nope, Moore does not make his films for these people.

As for those folks who know nothing outside their world’s of NASCAR, wrestling and reality TV trainwrecks, they are not going to waste their “precious” time by seeing anything higher-browed than the latest Adam Sandler and/or Will Ferrell comedy anyway. Ironically, many of these people are the very ones Moore is standing up for in his latest film. The common person. The Middle American. The laid-off blue collar backbone of the nation kind of people. The people who lost their jobs after the factories closed. The people who are losing their homes due to corporate and political greed. Although he does proclaim an affinity, an empathy if you will, with and for such people – and I believe he is sincere in this affinity and/or empathy – Moore does not make his movies for these people either.

As for either side of the so-called political spectrum, Moore is a two-headed coin of sorts. Never claiming to be fair and balanced (as a certain “news” agency arrogantly does!) he alienates one side while placating the other. Those of a more liberal bent (myself whole-heartedly included) – Moore’s core fan base if you will – end up being nothing more than the proverbial choir being preached to. Those of the tea party set – Glenn Beck’s angry mob of Stepford children if you will – would never be caught dead in a Michael Moore film, unless they were outside lobbing absurdist Beckian soundbites at all those going into the theatre as if they were outside a West Virginia-set Planned Parenthood and Moore was the “evil” abortion doctor holed up inside. No, Moore doesn’t make his movies for either of these groups of people either.

So the question remains – who the hell is this bombastic badger making movies for? The answer is the cinephile. Yeah, you heard me. It may not be a conscious effort (then again, it may be – at least to a partial degree) but it is for those of us obsessed with the cinema for whom Moore makes his movies. The film buffs, cineastes and auteurists out there are Moore’s true core audience. Or at least they damn well should be. Taken as pure entertainment, albeit with a rather satiric Marxist bent, Moore’s films – from 1989’s Roger & Me right on through to the rather under-appreciated Sicko two years ago – have been leading up to something wholly unexpected. With each successive film, Moore has become more and more resemblant to a certain New Wave cinematic icon. Now, with Capitalism: A Love Story, the filmmaker’s sixth film (unless one wants to count the John Candy vehicle Canadian Bacon, the director’s lone foray into fictional movie-making – and why would one?), he has made his most Godardian film to date. Yes, for better or for worse, Michael Moore has become an auteur. 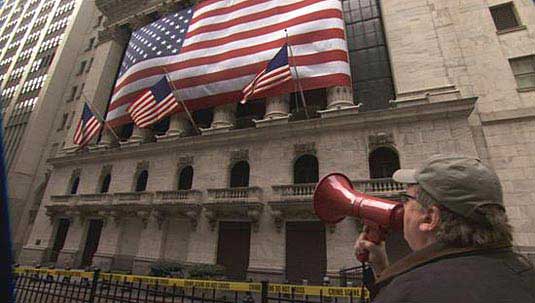 From the very start, Moore has created the most Godardian of motion picture excesses. From his primary-coloured opening note and his montage comparison of ancient Rome (via sword & sandals-esque footage from an old movie on the subject) and modern America (juxtaposing the image of Dick Cheney with the narrator’s mention of the emperor!) Moore gives us a creature that would fit in perfectly with the French new waver’s late sixties-early seventies output. This is Moore’s Tout va Bien, his Made in U.S.A., his Week-end, even. Although Moore doesn’t seem to share JLG’s once rather right-wing dalliances (he got over it!) he near-perfectly captures Godard’s flippant reverence for both cinematic history and political outrage. With Marxist mantra in tow, Moore has become less the godhead of self-righteousness many claim he is, and more the agit-prop provocateur in the realms of Godard and von Trier and Haneke and the like. Yes he still cares about that aforementioned backbone of America crowd – and makes his movies to help them best he can – but that hasn’t stopped his films from becoming increasingly more cinematic in nature. Cinematic to the point that not only is his finger on the pulse of the people and his tongue firmly pressed against chubby, unshaven cheek, his camera-eye is set toward the ancillarily artistic.

Yes, Moore should – and does – take his subjects seriously. Like Godard, his films are no mere entertainment alone, but something more. Something important. Yes, Moore – like Godard again in a way – plays at being the clown prince of liberal indignation, but he never loses sight of the grand picture. Mixing lark with pathos, he paints this grand picture with broad strokes of buffoonery in order to get people to take notice. Like the class clown in school, shouting, laughing and mocking until everyone is looking at him for what he’ll do next. But unlike the class clown, once everyone is looking Moore’s way, he pulls the camera away from himself and points it at his intended sympathetic subjects. The real drama unfolds when Moore points his camera at these subjects and we hear their stories. A family being kicked out of their home due to relentless foreclosure, only to turn around and have to work for pittance for the very bank that is throwing them to the curb. A widow wearing bitter indignation on her face when she finds out how her late husband’s company had made hundreds of thousands of dollars on the so-called “dead peasant” insurance policy they took out on him in secret. Moore may clown around in his crazy ape kind of way in order to get people to pay attention to his movies, but once they do he hook- line-and-sinkers them with the seemingly endless sad stories from his beloved Middle America.

The debate of clownish buffoon or serious auteur aside, Moore is always fodder for the right. Called a fat, bloated liar by many of the red state commentators, it seems his weight gain is the most abhorrent personality trait to their overly sensitive palettes. He is even shown as such in the horribly misleading – and quite unfunny – An American Carol (that movie made by the last seven remaining Republicans in Hollywoodland). Of course, the “liar” portion of their complaints is ballyhooed about like pork rinds and Natty Light at a red state tailgate party. Granted, there may have been some truth-coaxing in some of his films, though never any outright lies, but using poetic license to get your point across has always been the forte of the muckraker. Moore has never claimed to be unbiased, and his movies have never acted as such. Moore paints with broad strokes, and just like Godard before him, he may leave some information out in order to make his point clearer to those watching his movies. None of this voids the fact that the greed of capitalism has hurt this country and the people who are its backbone. None of this should be ammo for those who hate the man as much as they hate his “dirty pinko” ideas, but it is of course. Then again, you will probably never meet a middle-of-the-road Moore observer. He is either all hate or all love. It’s just the haters club is the more vocal. One anonymous Wall Streeter, when asked by Moore for advice, tells him to stop making movies.

Then again, Moore seems to be getting at least a little less flack this time around. Even many Republicans – the bane of Moore’s crux so to speak – are against the bailout and the ridiculous greed of people such as Bernie Madoff and his ilk. As many of the families getting the foreclosured boot are Republicans as they are Democrats.  There is also the notable mention that the film is being released by Overture Films, which is owned by noted Rush Limbaugh fan John Malone.  The irony of conservative indignation at Moore is palpable. Moore ends up blasting just as many Dems as he does G.O.P.-ers in his latest work. Much has also been said of how Moore can tout a Marxist revolution of sorts while still making millions on his movies. These critics never mention that Moore pays for every one of his employees’ medical benefits out of his own pocket. They never mention his living in a modest home and driving an older, American car. They never mention his charity work for Katrina victims or the like. Of course Moore has not completely denounced capitalism. You don’t get a body like that without more than a few trips to McDonald’s late-night drive-thru. If anything, Moore still loves capitalism – like an old girlfriend who has ditched him for a richer, cooler boy – and mourns its death in these days of corporate greed and commercial excess. He does subtitle his film A Love Story after all. Of course don’t try explaining any of this to Glenn Beck.

At the end of his film, Moore wraps Wall Street (or at least part of it) in yellow crime scene tape as if he is some sort of blunderbuss, rabble rousing Cristo. He follows this by saying he can’t live in a country like this, but that he is not going anywhere. It is a call to arms in a way. Perhaps not an out-and-out revolution but still a call for people to rise and take their country back. The country that striking workers demanded when they were forced out of their lifelong jobs. The country that FDR dreamt of when he laid down his new bill of rights just before he died (shown in archival footage near the end of the film). The country that Moore remembers from his childhood in the now defunct Flint, Michigan. Moore claims this is his final documentary and when he heads back to the corporate offices of GM – where his first film, Roger & Me started off (and of course he is still not allowed in) – it acts as perfect bookend to a career forcing people to think about what their country – or more apt, their government – has done to them. Whether this is his final film, only time will tell. Perhaps he will make Canadian Bacon II: The Iraq Equation next – who knows.

In sum, as I defend the man along with the film it has hit me that perhaps I am a bit too biased myself.  After all, I am one of that aforementioned proverbial choir being preached to.  So I wish to end my review with the words of someone who has a little more knowledge about such things as capitalism and its fellow buzzwords – and a person one would think would be somewhat biased in the other direction.  As the end credits roll, there is a quote from Warren Buffett, one of the richest people on the planet and surely one of those purported 1% who own 95% of the wealth. I want to close with that quote. “It’s class warfare, my class is winning, but they shouldn’t be.”. ‘Nuff said.