Kiddie horror films are a comparative rarity. In practice, this makes pretty good sense: after all, the MPAA has gotten pretty stingy with those all-important G and PG ratings in the last couple of decades, and more often than not, the sort of terror (and often straight-up violence) that the genre demands is enough to get a movie slapped with a PG-13, at the very least. In theory, though, it’s a little absurd: every other major genre is well represented in children’s and family films, and one would think that kids need to learn to deal with their fear at least as much as adults do. Most parents wouldn’t sit their three-year-olds down in front of A Nightmare on Elm Street, but it’s also hard to imagine the world of family entertainment without Cruella de Vil or the Wicked Witch of the West. 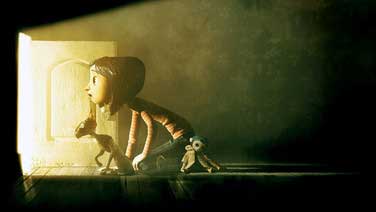 In other words, a delicate balance has to be struck: being scary in a kids’ movie is arguably a good thing, but be too scary, or — God forbid — violent or gory, and your movie will be doomed forever to the DVD collections of ironic hipsters. (Last year’s The Spiderwick Chronicles — an inexplicably PG-rated terror-fest with a body count well into the dozens (as well as, even more frighteningly, more than one Freddie Highmore) — is arguably on its way to this fate already.) If anyone understands this, though, it just might be stop-motion auteur Henry Selick. While he’s been relatively inactive as a director as of late, he directed 1993’s Tim Burton-produced The Nightmare Before Christmas, as well as the similarly themed James and the Giant Peach. Ignoring Monkeybone (a colossal flop, circa 2001), he has a pretty good track record. His latest, Coraline, is no exception: it’s engaging (and frightening) from start to finish.

There’s probably good reason for this. As tricky as the creation of a children’s horror pic may be, it’s also got a built-in requisite that makes for far more effective terror: namely, subtlety. In other words, the eviscerations that have been part and parcel of horror since the late 1960s aren’t an option, so instead of disgusting people, you have to actually, y’know, scare them. (Spiderwick missed the memo on that one, and…well, you know.) Nowhere is this better exemplified than in the very first scene of Coraline, which comprises one of the most subversively violent images I’ve seen on screen in a long time: two hands made entirely of needles slice open and disembowel a child, then turn its skin inside out.

Oops, did I say child? No, of course it’s not a child — that would never get past the censors. It’s actually a doll, and its “bowels,” of course, are just cotton stuffing. But thanks to Selick’s camera — which remains in close-up on the doll, and never reveals the identity of the needle worker — it’s a decidedly unsettling image, one whose horror just barely registers in the back of your mind. The rest of the film plays out this way as well, never resorting to cheap jump scares or crashing, Psycho-style violins, but simply pretending to play nice, all the while all letting its horror slowly sink its (needle-shaped) claws into you — until it’s too late to get away. 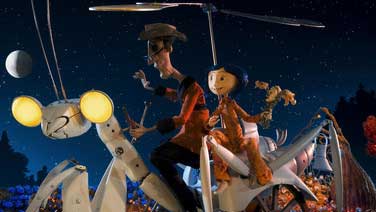 Of course, this is appropriate for the material at hand as well, which is based on a bit of young adult fiction by British author Neil Gaiman. The plot concerns a young girl with an unusual name and the voice of Dakota Fanning (whose ubiquity of late is a bit strange, but isn’t nearly as obnoxious as Freddie Highmore’s — oops, there I go again) whose parents have dragged her along (as parents are wont to do) on a residential move to a creepy apartment complex. Upset with her new found lack of friends, her parents’ same old lack of time, and pretty much everything else, she begins to imagine a better world — and then opens a mysterious spare door in the house and discovers that it does, in fact, exist. Her “other” parents have time to cook for her and play hide-and-seek, her “other” neighbors put on dazzling shows every night, and the “other” version of the annoying boy from next door doesn’t ever speak. And, unsettlingly, they all have buttons sewn on for eyes.

Everyone see where this is going?

Even if it’s a bit on the obvious side, though, Selick makes it work. Coraline’s initial dilemmas are easy to sympathize with — we’ve all been there at some point in our lives, I think — and it’s hard not to want her dream world to be real. Selick is such a master of his craft, though, that it’s quite obvious to the subconscious that there’s something evil at work here. Part of this is the use of stop-motion, which has an otherworldly jerkiness to it that gives everything a twisted subtext. The film is also in 3D, but Selick never uses the technique simply to impress or dazzle; rather, the effects are played up quite subtly at seemingly mundane moments (a four-poster bed here, a sewing kit there) to make the film unsettling on a gut level.

Unfortunately, Selick builds up the terror so flawlessly that the climax and denouement are a bit of a letdown — Coraline’s victory boils down to a video game-style quest that’s over far too quickly to be compelling, and the last twenty minutes hew too closely to the book to be effective on the big screen — but this is really just testament to the flawlessness of the film’s first two acts. And even when the film stumbles narratively, it still manages to dazzle aurally, with the eccentrically disturbing score of French composer Bruno Coulais (not to mention an excellent song by creepy-but-kid-oriented band They Might Be Giants) and Selick’s always-impressive animation. The character models and motions at play here are the sort that can only be made by human hands, and the resulting art is so deeply affecting that it truly makes you wonder why, exactly, we’re all so infatuated with computer animation. 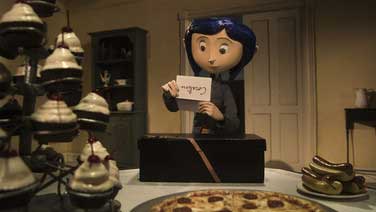 But in the end, what will stick with you here is simply how much truth there is to the central coming-of-age story. It’s quite easy, when you’re young, to imagine that the world exists for you and you alone; with such an outlook, it’s entirely understandable if you feel frustration with anyone and anything that fails to meet your needs and entertain you. Coraline learns here that the essence of maturity is, in some sense, coming to realize that when anything is good, true, or beautiful, it’s that way only because someone has worked excruciatingly hard to make it that way (with the corollary being, of course, that she has to do her fair share). Selick makes no effort to sugarcoat this, and in fact, the happy ending here is (intentionally) a bit of a letdown. Our heroine never manages to create anything quite as wonderful as the fantasy that she initially gets sucked into — a fact that is, of course, as it should be.

Like the best children’s entertainment, (last year’s City of Ember being a good example),Coraline refuses to feed kids easy answers, and is likely to leave you with a powerful sting of sadness and disillusionment. This, together with the more frightening parts, makes it hard to recommend for the youngest children, but older kids will find much to think about here — as will, I think, their parents.