Director Paul W. S. Anderson (Resident Evil, Alien Vs. Predator) probably continues to work because he can either 1) bring movies in under budget, 2) on schedule, or 3) with as little fuss as possible (i.e., no arguments with studio execs over his ‘vision’). The man is a glorified Assistant Director, and the nicest thing that can be said about Death Race is that it isn’t shameful. Given Anderson’s oeuvre (if he even warrants the use of that word), that’s actually quite the compliment. 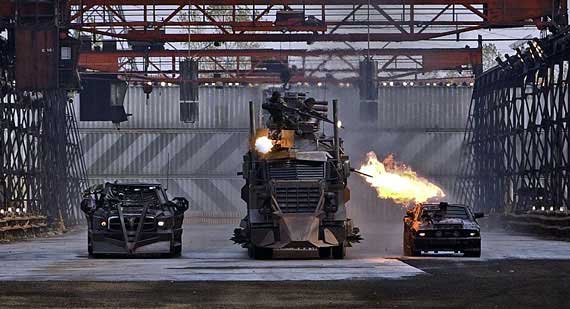 Armored semi-trucks with flamethrowers. You either dig it or you don’t.

An “in name only” remake of the ‘75 Roger Corman schlock-fest Death Race 2000 , Anderson’s version stars Jason Statham as a Nascar driver framed for his wife’s murder so a ratings hungry prison warden (Joan Allen, cashin’ a paycheck) can force him to drive in her nationally televised pay-per-view racing sensation, where expendable inmates drive souped-up armor-plated muscle cars in a race to the (drumroll please)…death. When the cars speed over various markers embedded in the racetrack, their gatling guns/rocket launchers/oil slicks are ‘powered up,’ allowing them to splatter (literally) the competition. I fully expected to see red shells and banana peels by the film’s end, since Anderson is conspicuously channeling Mario Kart ($20 says his on-set trailer was outfitted with a Wii).

Paul Verhoeven would have been a better choice to direct, as Death Race’s take on the gore hungry reality TV audience of the future ($250 gets you access to 100 different camera angles from the comfort of your living room!) would have found a better home in the DutchGerman director’s satirical hands (see RoboCop and Starship Troopers for proof), but Anderson doesn’t embarrass himself, delivering on everything that the high concept promises. Toss in a supporting cast that has entirely too much fun with lines like “It’s kill or be killed” (wise crackin’ grease monkeys Ian McShane and Jacob Vargas stand out in particular), and you have an unashamed B-movie that is pure pleasure in the guilty sense.

I certainly won’t draw my sword in Death Race’s defense, but 5 years from now, if it’s taking up space on some basic cable channel’s afternoon matinée, I’ll certainly wile away a lazy Saturday with it. Death Race can happily join The Running Man, Total Recall, and Tremors in that hallowed pantheon of B-movie howlers, and for a director like Paul W. S. Anderson, that’s nothing to be ashamed of.