There are few things that Walt Disney Pictures wears more proudly on its sleeve than its complete and utter lack of new ideas. Not only is Walt’s legacy based almost entirely on adapting literature and folklore, but since his death the studio has repeatedly cannibalized its own past with an almost frightening relish. The relentless remaking began with Robin Hood in 1973 — a retreading of the studio’s 1952 feature The Story of Robin Hood and His Merrie Men, and the very first (!!!) animated feature produced following Walt’s death — and has only sped up since, with everything from The Absent-Minded Professor to Treasure Island receiving multiple versions, and all of them with a slew of sequels, even if they have to spit on a few graves to get them made. (Fun fact: Louis Prima’s widow actually sued to keep the King Louie character he created out of The Jungle Book 2.)

With that in mind, I guess it’s no surprise that the Mouse House has deigned to grace us with yet another version of Charles Dickens’ A Christmas Carol, that classic tale that everyone in the entertainment industry has already raped into oblivion. For anyone keeping score, this is the third version of the tale to have the Disney branding stamped on it (which really shows a surprising amount of restraint on their part, all things considered), the other two being 1983’sMickey’s Christmas Carol and 1992’s The Muppet Christmas Carol (which actually may be one of the best adaptations of the story ever — not that you asked). This new version, while not un-gimmicky, eschews the Mr. Magoo-inspired shoehorning in of extraneous characters, and has been titled simply (and perhaps somewhat resignedly) Disney’s A Christmas Carol. 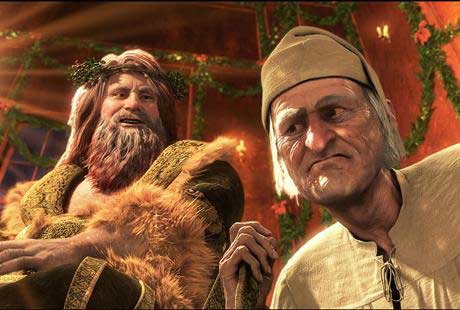 Come in, and know me better, man!

Sounds almost prophetic, doesn’t it? As though this is the definitive “Disney” version of the tale, the one you’ve always been waiting for, the one that will finally tame the wild spirit of Dickens and lock him safely away in Disney’s stable, right between a relinquishing A.A. Milne and a very bemused Victor Hugo. If that’s what you’re expecting, though, you’re going to be surprised at just how un-Disney the whole film feels. Actually, it turns out that A Christmas Carol is “Disney’s” in the same way that Disney’s Toy Story was when it was released under that title back in 1995. In other words, Disney bought it from an animation studio you’ve probably never heard of, stuck their name on it, and distributed it to theaters.

The studio in question, of course, is Robert Zemeckis’ Image Movers Digital, the company that brought you The Polar Express and Beowulf (and, in case you’re wondering, is now a full subsidiary of Disney). A Christmas Carol is less a “Disney” film than a spiritual sequel to those two — a literary adaptation where actors play multiple characters thanks to the power of computer animation and motion capture (in this case, Jim Carrey plays Scrooge and all three spirits of Christmas) — and it has more-or-less the same strengths and weakness as its predecessors.

And, plastic automatons are better than real people…how?

Shall I start with the weaknesses? Okay, first: these animated characters do not look like people. At all. They never have, and they never will. I’m not sure how the director behind classics likeBack to the Future and Romancing the Stone got it into his head that motion capture is the future of cinema, but after three films, he has yet to come up with results that really manage to impress. The technique used here involves having the actors act out the sequences while wearing motion-capture suits, and then applying their voices and motion to CGI characters. It’s a technique that’s been used to great effect in live-action films (witness Andy Serkis as Gollum in Peter Jackson’s Lord of the Rings series), but seems entirely purposeless in a fully animated film. Why should animated characters, in an animated world, attempt to look and move like real people? If you’re really trying to approximate real life, why no just use real actors and some good old-fashioned special effects?

It doesn’t help that Zemeckis’ character models look just enough like real people to be unsettling — think Gigolo Joe from A.I., or better yet, just look up “uncanny valley” at Wikipedia — giving all of the proceedings a soulless, plastic sheen. Actually, this seems vaguely appropriate, given that the material is A Christmas Carol — a work that once bled Dickens’ sympathy for the underclass, but has been stripped of its politics, co-opted by the corporate establishment, mass-produced, and sold back to the poor each and every year in order to line Scrooge’s proverbial pockets — but, of course, that fact doesn’t make it bearable any more than a plastic, light-up baby Jesus reminds us of the true meaning of Christmas. The whole thing looks like a cut-scene from a videogame circa 2003, and feels totally out of place on the big screen. It’s all the ugliness of a videogame, plus all the passivity of a movie. Fun! 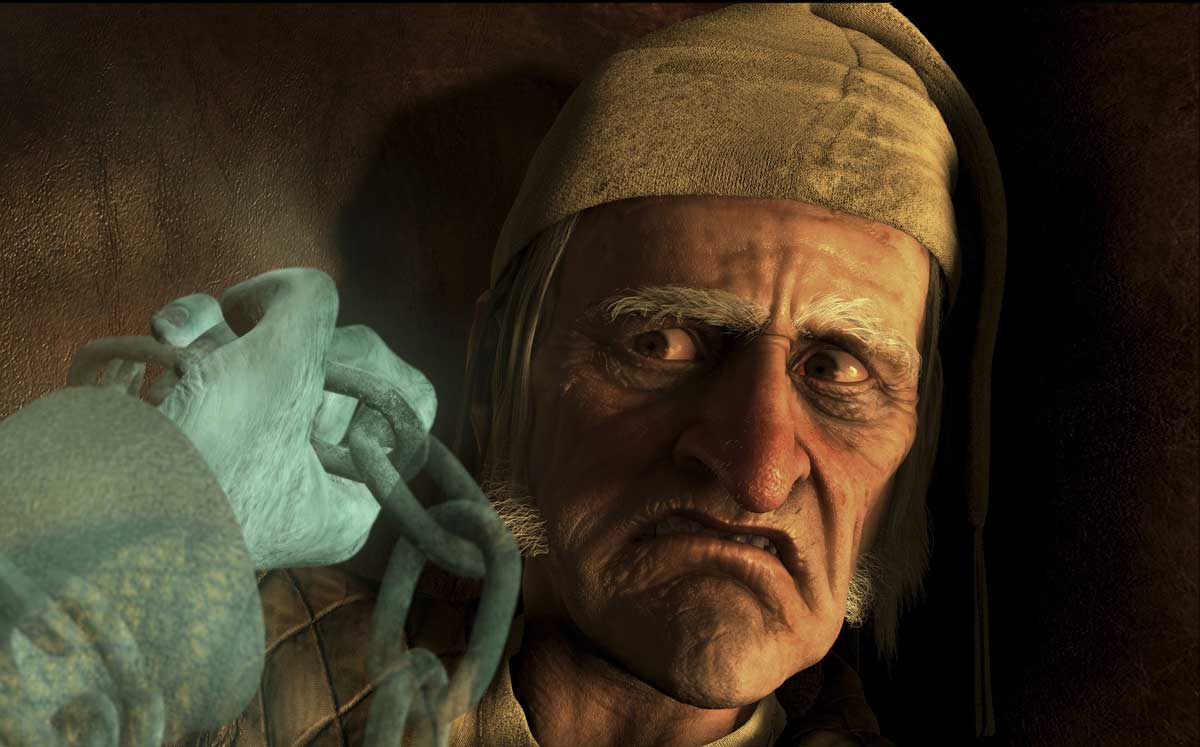 All that being said, there’s one strength here that’s impossible to deny: this is actually the most faithful adaptation of Dickens’ story to come along in quite some time. The story’s relentless adaptations of the last century and a half have done it no favor, scrubbing it to a complacent luster and filing its visceral teeth down to stumps (much like they have that Other Famous Christmas Story — y’know, the one where the teenage Jewish girl gets knocked up and then gives birth in a barn). It’s easy to forget that A Christmas Carol is, first and foremost, a ghost story (a “scary ghost story,” if you believe a certain seasonal song). Zemeckis’ new version actually manages to restore much of the awe and terror that the work once inspired, and two sequences in particular — the appearance of Jacob Marley and the death of the Ghost of Christmas Present — are some of the most frightening and grisly scenes I’ve seen on screen in a while. (Truth be told, they almost make the Ghost of Christmas Yet to Come seem anticlimactic, but I guess you have to take the good with the bad). Add to this a script that takes almost all of its dialogue directly from Dickens’ pages, and you have an experience that’s surprisingly frightening and political for a PG-rated film with the word “Disney’s” in the title.

That leads me to tentatively recommend the film, but I’m still scratching my head as to exactly who it was made for. The screening I attended was filled with parents and their children, but most of the children seemed either frightened or bored for most of the experience. After all, Dickens’ A Christmas Carol, for all its cultural ubiquity, is almost all dialogue, and the film reflects this. More than anything, this makes the story seem like an odd choice for the CGI treatment, let alone the now-obligatory digital 3D — after all, Beowulf is crammed full of action, but A Christmas Carol is mainly about an old man brooding over his past. Zemeckis seems to have been implicitly aware of this, and has grafted on a handful of action sequences to provide the expected eye candy. Unfortunately, they do nothing to advance the story, and they even fail to make interesting use of the 3D. They’re just sort of there, and they appear at such irregular intervals as to be completely jarring. (Imagine that you’re trying to read A Tale of Two Cities,and every so often, Michael Bay breaks into your house and blows something up. That’s what this feels like.)

SPOILER ALERT: Scrooge has a change of heart.

Honestly, it’s hard to pass any sort of meaningful judgment on a film that has both so many towering strengths and so many glaring weaknesses — frankly, it feels like watching two different movies that have been spliced together. I can tell you that it’s easily the best version of A Christmas Carol currently showing in 3D at the local multiplex; perhaps that alone makes it worth seeing. But as I’ve mentioned, it’s not for young children, unless your children are very brave and enjoy long sequences of nineteenth-century-era English dialogue. That being said, only time can truly judge the value of this version of the tale, and part of me doubts we’ll be seeing it rerun on network TV every December. It’s a noble attempt, but it feels like it’s not quite finished wrestling with its own personal ghosts.