It’s a cliché, and it’s obvious, and any hack film professor could tell you this, but I guess it has to be said: the alien movies we create are always products of their time. Or, at least, the good ones are. The space aliens on the screen are always stand-ins for terrestrial aliens — whatever sort might haunt our dreams at the moment.

The 1950s were, of course, the heyday of the genre, and the aliens, without any obvious variation, represented either the fear of Russian Communism (The Thing from Another World!) or the fear of the fear of Russian Communism (Invasion of the Body Snatchers). As that fear waned, so, too, did the genre (aside from the occasional hippy-dippy counterpoint like Close Encounters of the Third Kind). The ‘80s and ‘90s were unsurprisingly short on alien movies (aside from Roland Emmerich’s Independence Day, which accurately captured the spirit of its time by being grinningly, unashamedly stupid).

As fear slowly came back into vogue in the 21st Century, however, various directors attempted to revive the genre by tapping into it. Steven Spielberg attempted this with War of the Worlds,which tried to paint the aliens as 9/11-esque terrorists; Scott Derrickson attempted to scare us with environmental destruction in The Day the Earth Stood Still. Sadly, both felt a bit warmed-over (it probably didn’t help that they were both remakes of sorts), and neither one came at all close to tapping into something culturally relevant.

The point that was missed with these, I think, is that real-world aliens are now rarely, if ever, sources of fear. The Cold War is long over, having left the so-called Second World in the dust. The only “Worlds” that remain are the First and Third — those of us who were fortunate enough to grow up with capitalism, and those who shoulder its concealed costs. (Marx was correct when he surmised that all of history was a dialectic struggle; he was laughably off the mark in imagining this would cease with the rise of Communism.) History has left our species divided, neither side knowing how to help (or even reach out to) the other. Kipling’s “White Man’s Burden” (whatever else you may say about it) has decayed into nothing more than a rotting pile of complacency and vague guilt.

District 9, the new alien-themed film from director Neill Blomkamp and producer Peter Jackson (director of the Lord of the Rings trilogy, Heavenly Creatures and Dead Alive) is probably the first film to truly understand this. Set in Johannesburg, South Africa, the film has overtones of apartheid, but ends up being about something even bigger: the intersection of two worlds “alien” to one another, the lack of easy answers for the problems inherent therein, and a stoic sadness for what’s left.

In District 9, the aliens aren’t invaders, they’re refugees. Their ship arrives in Johannesburg for no apparent reason other than a lack of anywhere else to go, and the hordes of aliens inside are impoverished and living in their own filth. With the government clueless and lacking the resources to do anything, the job of housing the aliens (derogatorily called “prawns”) is handed off to the for-profit sector, specifically a corporation named MNU. The prawns are quickly herded into a ghetto of corrugated steel shacks and banned from most of the human city. Their ghetto quickly devolves into a slum, the prawns continue to be exploited equally by MNU and Nigerian militias, and soon the humans want them out. 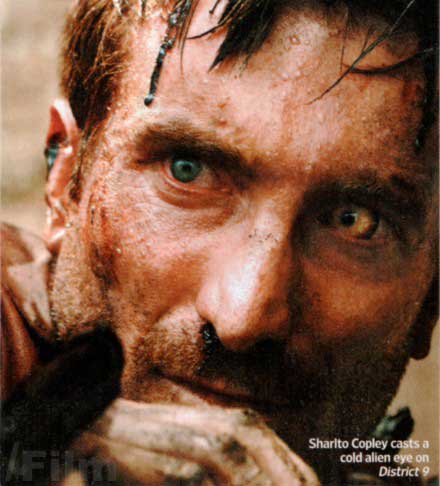 This is where the film begins. We’re introduced to Wikus van der Merwe (Sharlto Copely), an MNU paper-pusher who has been promoted to head of the prawn relocation program. He begins to hand out the eviction notices to the prawns, in a mockumentary-style sequence that’s borrowed as much from The Office as anything.

Blomkamp isn’t really out to make the next great mockumentary – this angle is merely an attempt to give the proceedings a bluntness and callousness that they wouldn’t have otherwise. It’s also profoundly — and strikingly — unfunny, meaning that the humorous release of tension that Office fans are accustomed to is completely absent, making the film’s first act an extremely uncomfortable one. After setting this tone, Blomkamp more-or-less abandons this approach (a decision that is initially jarring, but turns out to be the right one, as it allows him to “humanize” his characters, if you’ll pardon the expression). The stoic first act leads into a middle that’s equal parts Melvin van Peebles and Franz Kafka; then the third act explodes into all-out war (complete with Jackson’s signature love for splatter). The film is an extremely uncomfortable one to watch, as ignorance leads to mistrust, mistrust leads to abuse, and abuse leads to the inevitable violence. It’d be virtually unwatchable for all but the most cynical and bloodthirsty, were it not for a solid moral core.

At the center of everything here is the brief intersection of two lives: that of van der Merwe, and that of prawn who goes by Christopher Johnson. Neither character is particularly likeable; van der Merwe is a weaselly demagogue and Johnson is an illegal weapons dealer. Both men are deeply evil, but both are also mere victims of the world they live in — cogs in the great machine. Their forced cooperation leads to something much smaller and quieter than anything around them, but also much more real and much more lasting. It is in these moments that the film finds its redemption.

The global system presents its participants with no viable alternatives but to abuse and exploit others. Some exploit others legally (via the corporate machine), and some do so illegally (via militias and the black market), but the end result is the same: misery, destruction, hatred. The only hope available to those that would seek it is in the same place it’s always been: sacrifice, friendship, love. That stuff never makes the headlines, and often it’s barely visible amid the war and deception, but it’s the only hope the universe has ever had for positive change.

On the one hand, District 9 is a difficult film to recommend to everyone. Not only is it extremely violent and gory; it’s bleak, cynical, and depressing. It is, however, likely to be one of the most important films of the year, and it’s filled with plenty of redemption for those willing to look for it. Furthermore, Jackson and Blomkamp have successfully brought the alien flick into the 21stCentury — and in the process, they’ve created a film so culturally relevant that it simply cries out to be seen. Put simply, this is the voice of those who are miserable in their oppression, and of those who are miserably carrying out the oppression — and it’s packaged in a form that just might be the only way these voices will ever be heard.