Ghost Town is a film that’s somewhat obviously inspired by M. Night Shyamalan’s hit 90’s horror film The Sixth Sense, and it makes no bones about that — going so far as to use the tagline “He sees dead people…and they annoy him.” As the second half of the line suggests, however, Ghost Town is about as far from a horror film as this sort of story gets. The ghosts here bear no gruesome marks to indicate how they died (although they do wear whatever they died in — making things a bit awkward for those that died in the shower or while engaged in coitus), and you won’t hear a single bloodcurdling scream. No, Ghost Town is a simple romantic comedy — and a very good one, at that.

It’s probably an old cliché to say so, but Ghost Town really is the sort of movie that Hollywood just doesn’t make anymore: a sweet, but not cloying, romantic comedy that — despite its fantastical trappings — features relatively down-to-earth characters (lonely middle-agers, not beautiful twenty somethings already making six-figure incomes), and which gets its most of its humor from characters cracking actual jokes, not acting stupid, or passing gas, or quoting other movies and winking. It’s the sort of film that, if it weren’t filmed in color, you’d almost expect to see Frank Capra’s name in the credits.

The setup goes something like this: Ricky Gervais, the comedian best known for portraying David Brent (the character known to Americans as “Michael Scott”) on the original British version of The Office, plays Bertram Pincus, a self-absorbed and misanthropic dentist living in New York City. When he visits a hospital for a routine colonoscopy, he’s given an overdose of anesthetic that leaves him temporarily dead. The staff successfully revives him, of course, but the ordeal leaves him in an awkward position, straddling the here and the hereafter. In other words, he’s the only person in NYC that can communicate with both the living and the dead. 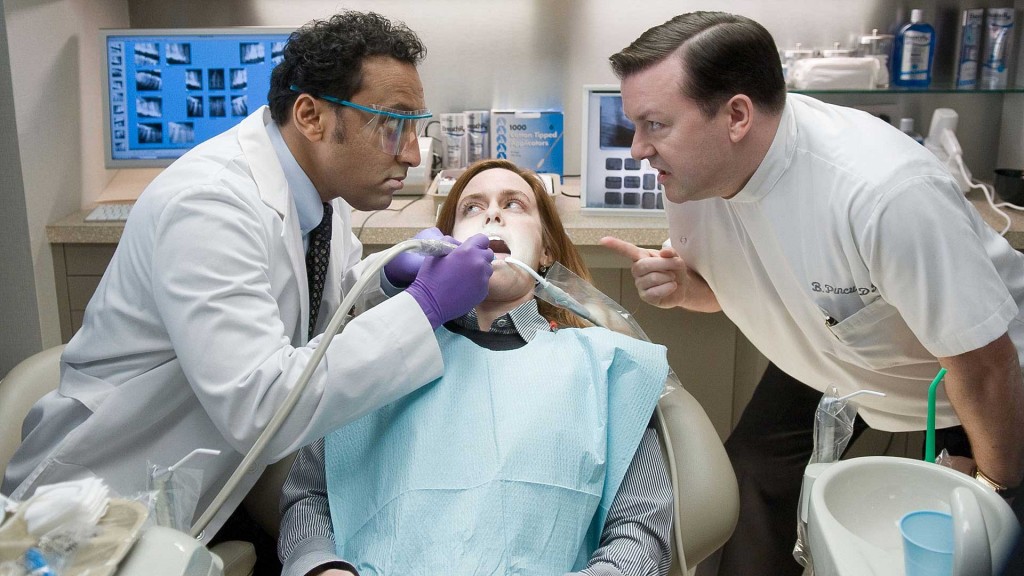 The classic love triangle: a man, a woman and her dead husband.

As we all learned from Shyamalan nine years ago, the reason the dead walk among the living is because they have unfinished business to attend to — and Bertram learns this too, when he runs into Frank Herlihy (Greg Kinnear, formerly of Talk Soup), a Manhattan businessman who’s been dead nearly a year. Frank is desperate: his widow Gwen (Téa Leoni, Fun with Dick and Jane) is seriously dating a man he hates, and he needs Bertram to break it up. Bertram, of course, thinks he’s the ideal candidate to lure Gwen away.

All this exposition probably makes the film sound like yet another dumbed-down high-concept comedy, but in all honesty, nothing could be further from the truth. Within the first half-hour of the film, you simply forget that anything out of the ordinary is going on at all — you simply take the ghost element for granted while the interactions between the characters play out naturally. The filmmakers clearly weren’t afraid to hire non-“name” actors (no one in the film is particularly well-known on this side of the pond), and this pays off in a big way. This is true in the obvious sense — the audience isn’t carrying the baggage of the actors’ previous roles — but also in the sense that each actor is perfect for his or her role, and doesn’t feel shoehorned in simply to sell tickets. The chemistry between Gervais and Kinnear strikes just the right chord between desperation, jealousy and loathsomeness; the interactions between Gervais and Leoni hit all the right moments of awkwardness and sparks of connection. The characters may seem to be empty archetypes at first (particularly Gervais’s, who initially appears to be a mere self-absorbed snot who has to learn Important Lessons), but the actors and the screenplay work together seamlessly to turn them into real people, all of whom manage to make you love them.

Ghost Town is the same sort of “man-is-privy-to-information-about-the-woman-by-supernatural-means” film as (for instance) Groundhog Day and What Women Want, but like the former (and unlike the latter), it manages to be memorable because it goes beyond its initial Big Idea and takes a long hard look at real people: their lives, their longings, and their failures. Despite its genre trappings, it has much more in common with The Sixth Sense than it initially seems to: like Shyamalan’s film, Ghost Town is a story about those who are dead, whether they know it or not: those who have dead bodies, and those who have dead souls. Watching a spiritual resurrection take place on the big screen is nothing new, but it never gets old, especially when there are actors like Gervais to make it feel so real.