Weaves, extensions, braids, and self esteem, along with sodium hydroxide.

These are the follicle-altering components highlighted in Good Hair; a permed, curled, and  lazily combed documentary that examines the effects of those in the African American community.

The idea for the film — based on a question posed by one of Rock’s three daughters — Good Hairis at times informative, humorous, and proverbially misshapen like a nap-riddled Afro. Directed by Jeff Stilson, G.H. comes complete with narration by Chris Rock (which just so happens to sound like an episode of Everybody Hates Chris), and is often hard to take seriously, even when an exodus toward the origins of the illustrious strands takes him on a trip to India. Once there, the religious and spiritual reasons for the removal of their hair are revealed, and coming from the mouth of Rock’s high-pitched, relaxed vernacular, his cartoonish  voice-over dilutes the magnitude and significance of an Indian ritual. 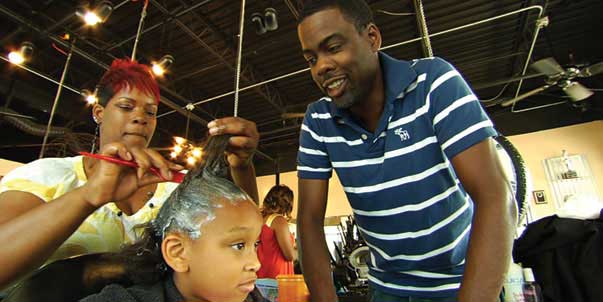 The satirical slant in Good Hair applies a layer of needless sheen, and upon viewing the ridiculous and showy nature of gawdy hair shows showcased in Chocolate City (that’s Atlanta, GA, for those that don’t know)  the film is simply hard to take serious. For those  in the black community, the self-image issue is a topic that requires a deeper, more introspective approach.

There are positives though; interviews conducted inside barbershops and hair salons offer great insight, and there’s a revealing look at the damage sodium hydroxide can cause; as well, appearances by African Americans from the entertainment business and others from all walks of life discussing a touchy subject induce laughs that come easy and offer brow-raising insight.

But nonetheless, Good Hair fails in its attempt to take on serious subject matter, so in turn, why should moviegoers take it seriously?