This review was originally written on July 2, 2008.

I love Peter Berg, much much more than I reasonably should. He’s directed some entertaining (if slightly forgettable) movies like Friday Night Lights and The Kingdom, but he holds a special place in my heart for putting one of the greatest action epics of all time onto film. That’s right, you guessed it, The Rundown, starring Dwayne “The Rock” Johnson and Seann William Scott (you know, Stifler from American Pie).

You probably think I’m being sarcastic. I’m not. For inexplicable reasons, The Rundown is one of my all-time favorites, sharing a spot in my Top 10 along with Vertigo, Lawrence of Arabia, andRequiem for a Dream (I am nothing if not eclectic). I love this film with a passion that borders on the unhealthy, and my wife becomes intensely irritated with me whenever I want to watch it for the 37th time. It’s a mania that rises to teenage-girl-meets-Titanic levels of obsession, and whenever I meet one of the uninitiated, a rabid glee enters my eyes as I preach on its Looney Tunes-esque action sequences, its Arnold Schwarzenegger cameo, and Christopher Walken uttering my favorite line of dialogue ever, “Wow, that’s a lot of cows.” Professional propriety can shove it–I love this film.

So you can imagine the lightheaded anticipation I’ve felt ever since witnessing that firstHancock trailer back in January. Not only was it riotously funny, Peter “The Rundown” Berg (!) was at the helm, and maybe, just maybe, another guilty pleasure masterpiece would muscle its way into my Top 10.

Sadly, it wasn’t to be. Even though the cynic within me took a backseat to the giddy fanboy,Hancock left me more conscious of its flaws than of its successes, and although it has moments of genuine popcorn gobbling fun, it ultimately buckles under the weight of its own ambition. 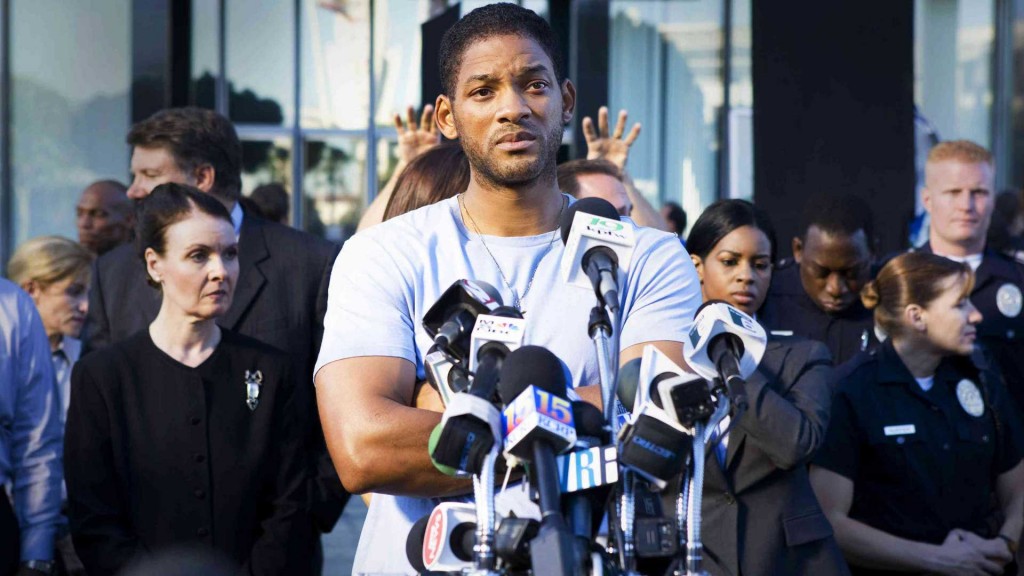 Hancock reasons with the locals.

Will Smith (I Am Legend) plays the titular ‘hero,’ a grimy bum who would rather sleep off his hangover on a city bench than save the day from L.A.’s various do-badders. The opening sequence finds him reluctantly stepping in to stop a high speed pursuit on the 105 Freeway (his ‘call to action’ is a small boy with a colorful vocabulary). He cartwheels through the air like a drunken Superman, which makes sense since he is drunk, casually destroying property with all the finesse of an inebriated 3-legged bull in a china shop. He lands in the back of the perpetrators’ SUV and tries to calmly reason with them and their Uzis, until they rat-a-tat-tat his favorite pair of shades and trusty bottle of Jim Beam, at which point he gets slightly peeved and proceeds to spike their vehicle, with them in it, on top of a nearby skyscraper. A local newscaster informs us that the property damage has climbed to $9 million, a “personal best” for Hancock, and wishes that he would go save New York instead. Thus we are introduced to our antihero, a lazy, foul-mouthed, unloved strongman in desperate need of a PR makeover. 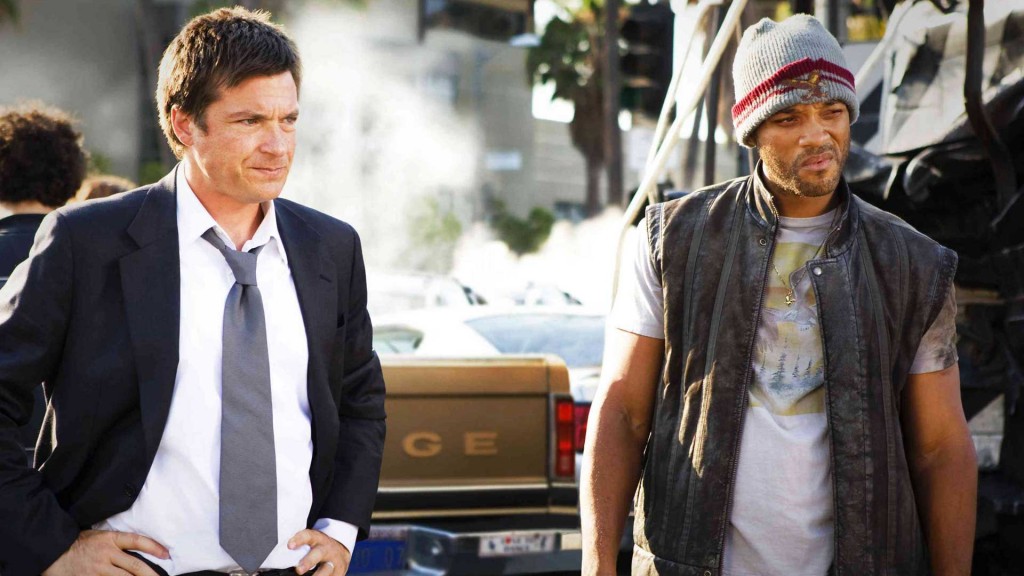 Will Smith as Hancock and Jason Bateman as Ray Embrey.

The first two thirds of the film are sheer genre fun and almost worth the price of admission. While not groundbreaking, the premise is certainly clever, and the script mines the gimmick for all it’s worth. A few of the gags are painfully unfunny (one in particular brings new, unpleasant meaning to the term ‘brown noser’), but most of them pulled the guffaws out of me in spite of my better judgment. Hancock chucks obese bullies thousands of feet in the air, “rescues” beached whales, and argues with the locals over whether he should have flipped the car or gone straight up into the air with it. Jason Bateman (oh Michael Bluth, your Arrested Development fans miss you) plays the PR exec with a heart of gold who takes Hancock under his wing and sets him on the road to recovery, redemption, and civil responsibility. And, as schmaltzy as that sounds, the film (accompanied by Will Smith’s respectable acting chops) deftly earns Hancock’s transformation from a**hole to role model. The transition would have been ripe for melodrama, but Berg navigates the emotionally gooey minefields of AA meetings and adorable kids who “believe in him” with a sure hand, and I never once had trouble believing that Hancock was becoming a better human being.

Then, just when the film has charmed its way into your good graces, it whips out a 3rd act revelation that resembles more of a kick to the crown jewels than a shockingly clever twist (which they no doubt thought they had achieved). Ribald-superhero-comedy-with-a-surprisingly-tender-heart meet epic-Shakespearean-romantic-tragedy-chock-full-of-confusing-Lady in the Waterish-mythology. Wait, what? To discuss it any further would be to potentially ruin the surprise (as bizarre as it may be), but suffice to say Berg and his scripters make a fatal miscalculation that shipwrecks an otherwise wonderful flick. 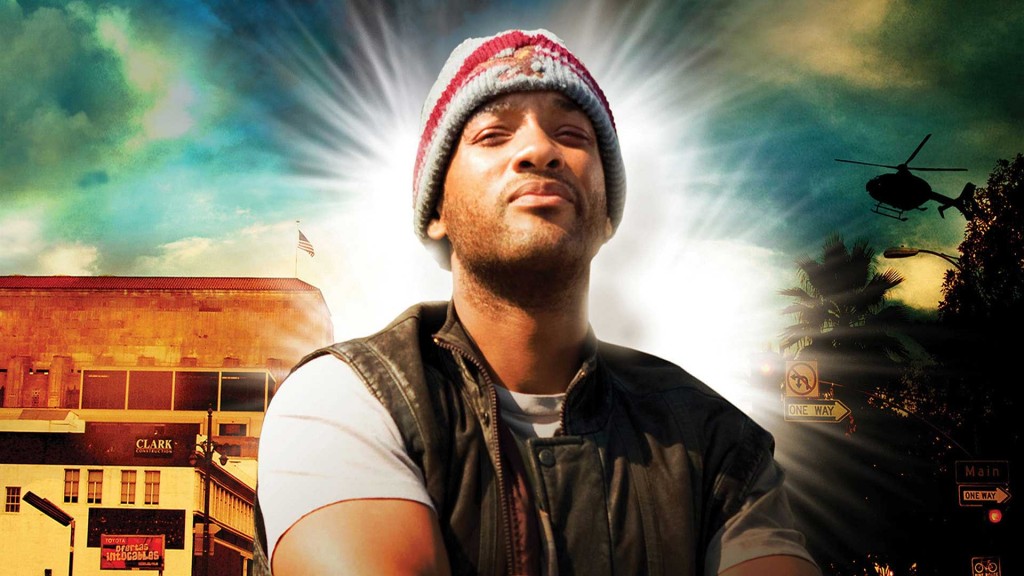 Humor me an anecdote. My cafeteria in college was overseen by a company with dubious culinary credentials. Mystery meats made regular appearances, and the one bright spot in the week was Mexican day, since you have to work pretty hard to screw up tacos and beans. Sitting down to lunch between bouts of Abstract Algebra and Glee Club, I coated my tortilla in sour cream and opened up for a mammoth bite of Tex-Mex goodness…and nearly threw up as my mouth was assaulted with a disgustingly foreign flavor. Cleansing my palate out with some generic blue soda, I realized that the ever-vigilant cafeteria staff had mistakenly placed cream cheese into the sour cream bin.

Now, I love cream cheese almost as much as I love sour cream, but when I’m promised one and given the other instead, the effect is shockingly unpleasant. Neither of Hancock’s films (and there are two distinctly different motion pictures wrestling one another within it) are necessarily bad, but when you’ve been savoring and enjoying one, only to have it secretly switched on you halfway through, it’s like being served a bagel topped with sour cream.

With a little more work in the script stage, Hancock could have been the surprise gem of the summer, destined for loving cult status, rather than the forgettable box office flash-in-the-pan it’s sure to become. You’ve let me down a bit, Peter Berg, but we can still be pals, and if I’m not mistaken I think I hear The Rundown calling to me from the other room. In movies, as in life, there’s nothing a little Christopher Walken can’t fix.