“I make movies for the planet Earth”
-Quentin Tarantino

We’ve all heard of writer/director Quentin Tarantino, from his early days working as a video store clerk to his successful independent feature, Reservoir Dogs. Highly controversial in his presentation of violence, language, and race, he has developed a rare fanbase over the years that draws from everyday moviegoers to hardened cineastes. Tarantino’s blend of pulp, dialogue, and homage to other films are his defining characteristics.

Inglorious Basterds, easily one of his most accessible films to date, is set during World War II in “Nazi-occupied France”. The titular heroes are a group of Jewish-American soliders led by Aldo “The Apache Raine (Brad Pitt). Raine gets his nick-name from his habit of scalping Nazis. The Basterds are charged with the duty of reaking havoc among  the German ranks, which they do with glee.

The film starts with a fantastic scene that sets the tone for the rest of the film, introducing us to the protagonist, villain, and length of scenes. Tarantino has described Inglorious Basterds as a World War II spaghetti-western, and this is evidenced here. It also has one of the best references to The Searchers that I’ve ever seen.

Inglorious Basterds is broken up into 5 separate chapters, complete with title cards. With the way that each chapter feels like only one long scene, I think the title cards were a smart move, creating the rhythm of the film. 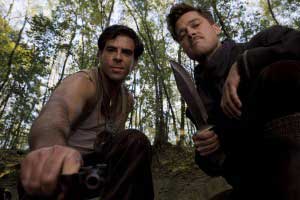 One element that I highly appreciate from this film is the wide range of international actors in the film hailing from France, Austria, Spain, and especially, Germany. (Take that, Valkyrie) Tarantino’s use of subtitles in the film was also a good move. The liberties that he took with that, noticed more in the opening scene, were quite humorous.

I was surprised at how little screen-time the Basterds received overall, focusing more on Shoshanna (Melanie Laurent) and Col. Hans Landa (Christoph Waltz) The praise goes to Waltz for his chilling and nonchalant performance as Landa, “The Jew Hunter”. Expecting the film to be heavily wallow in the gratutious actions of the Basterds (which are shown on screen), I was more involved in the story than I expected to be.

It takes a while to get there, but the ending is thrilling to say the least. Tarantino could have taken the film several different ways, and kept me guessing until the fade to black. The final shot is as close to Tarantino’s trunk as you can get without actually having a trunk.