So, like, there are these Satanists, right? And they think this girl is, like, a virgin and stuff — but she’s like, totally not, okay? But then they sacrifice her anyway, so then she has, like, a demon dwelling in her reanimated body, which totally blows, and then she has to eat people to stay alive, which blows even more, am I right? Like, duh.

Now this girl — who’s totally captain of the cheerleading squad and stuff — is, y’know, like an unholy monster from hell. And, like, when she eats people she’s hot like that cute-butt-of-the-month girl that the boys all like, Megan Fox? But when she doesn’t, she gets all splotchy and stuff, and looks like Megan Fox probably does when she forgets her makeup, or whatever. You can totally see the dilemma, right?

Anyway, this one is the new one written by that Diablo Cody chick — she’s like some sort of skanky stripper or something? She wrote that movie Juno, which I guess was one of those Oscar movies that smart people go to? Whatever. People are always talking about the “sophomore slump” (which is totally that girl in my French class, am I right? burn!), and, like, maybe that’s what’s going on here? This one has all that dialogue filled with a bunch of slang that I’m pretty sure Diablo just made up, but, like, without any of the interesting characters to say it. It’s, like,so annoying. This Diablo lady’s like 30 years old! You’re not that cool, okay Diablo? Gawd, I hopeI don’t live to be 30. 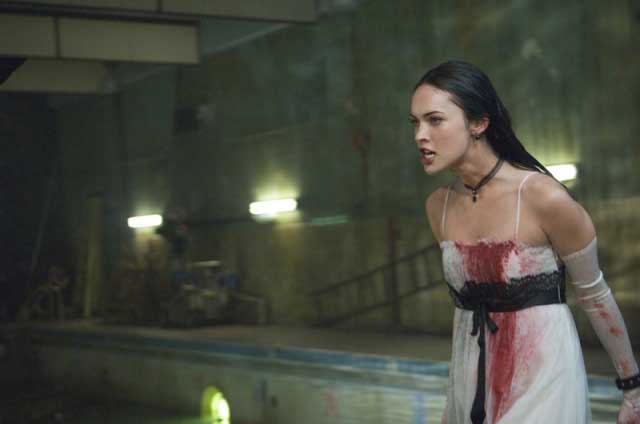 So like, okay, some people tell me that back in the 60’s and 70’s, when like, old people were alive, there was a genre of movie called “exploitation,” where horror movies would have ridiculous plots and then be, like, full of gore and nudity to get people to come see them. And maybe that’s what she’s going for? But, there’s like almost no gore in this movie, and no nudity at all! It’s definitely kept at PG-13 levels, which I totally don’t get, since there’s, like, a butt-ton of f-bombs. And then they’re, like, all trying to shock me with a lesbian kiss? It’s like, welcome to 1996, Diablo!

Okay, so I totally don’t want to blame just Diablo here, because the director was Karyn Kusama, and she made that terrible Aeon Flux movie that nobody likes, so whatever. And also, like, there’s definitely some good stuff here. There’s some pretty funny jokes about how indie rock music sucks, and some stuff about female sexuality that they tell me is “vaguely Freudian,” whatever the hecks that means. But really, it all ends up just feeling like a long episode of Buffy,and that so isn’t enough if you’re trying to impress those weird Hot Topic kids. So whatever, right? I mean, like, I liked it, but I don’t know who I’d recommend it to, right?