Note: this review contains significant SPOILERS about the ending of the film.

Before the noir movement ground to a halt in the late 50s, it surged forward with one last manic burst of energy, much like a sprinter inches from the finish line. Noir pictures became darker, more nihilistic, and even achieved some measure of self-awareness. Whereas foundational films such as Double Indemnity and Out of the Past had little idea they were establishing the conventions of a movement, later pics (even if they still lacked a word for it) proudly tattooed “NOIR” across their cinematic foreheads. Kiss Me Deadly is one such 11th hour noir, a film boiling over with post-war anxiety and featuring a protagonist that is nearly as amoral as his adversaries. If The Maltese Falcon was a slap to the cheek, Kiss Me Deadly is a boot to the head. 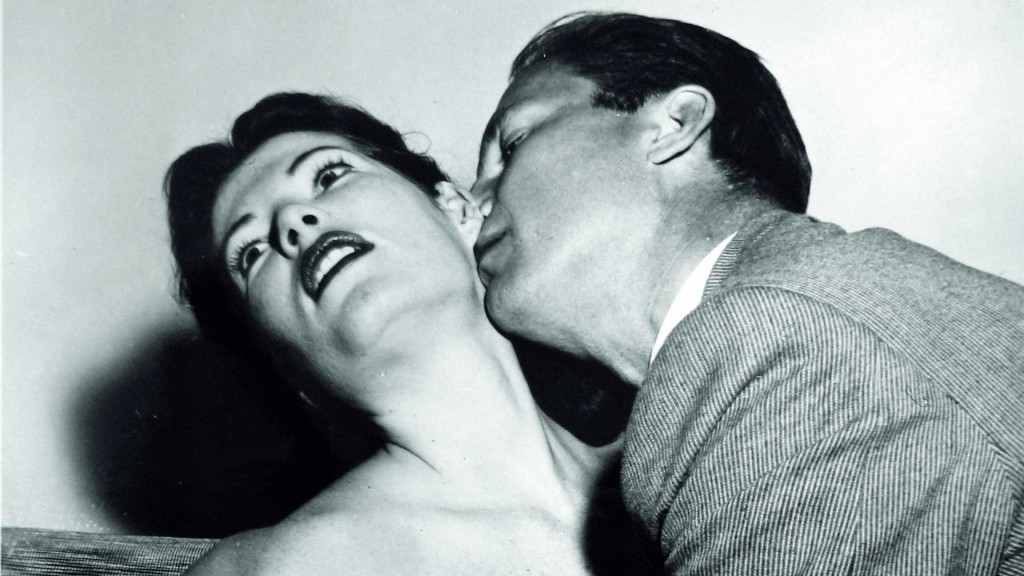 A woman, naked except for a trenchcoat, stumbles along a forlorn highway, alien lights from passing cars blinding her. She’s disoriented, scared, and fleeing some unknown assailant. Desperation forces her to throw herself, spread eagle, into the middle of the road, causing a car to swerve violently and spin out in the dusty embankment. “You almost wrecked my car,” the driver says. “Get in.”

Moments later they are run off the road by a faceless gang, woman and driver taken to a nondescript location. He is out cold on the naked box springs of a rusty bed; she is screaming, her bare legs dangling from the edge of a table. The camera shoots low, revealing only loafers and floorboards. “She’s passed out,” one of the thugs says matter-of-factly. A pair of pliers dangles loosely in his hand. In the canon of film noir, this is as nasty as they come.

Mickey Spillane was something of a poor man’s Chandler or Hammett. His first Mike Hammer detective novel, “I, the Jury”, written in 1947, sold 6.5 million copies and put him and his hardened P.I. on the consumer map. In response to widespread critical disgust, Spillane was quoted as saying, “My work may be garbage, but it’s good garbage.” Screenwriter A.I. Bezzerides (also responsible for scripting the seminal noirs On Deadly Ground and Thieves’ Highway) was hired to adapt Spillane’s sixth Hammer novel, and he approached it with the same derision that the literary community had. “I wrote it fast because I had contempt for it … I tell you Spillane didn’t like what I did with his book. I ran into him at a restaurant and, boy, he didn’t like me.” (The Guardian, Feb. 6th, 2007) Bezzerides took a middling piece of pulp fiction and shoved it down into the bowels of noir cynicism, transforming Mike Hammer from an indistinguishable P.I. into a sadistic anti-hero with a blatant disregard for anything but his own narcissism. 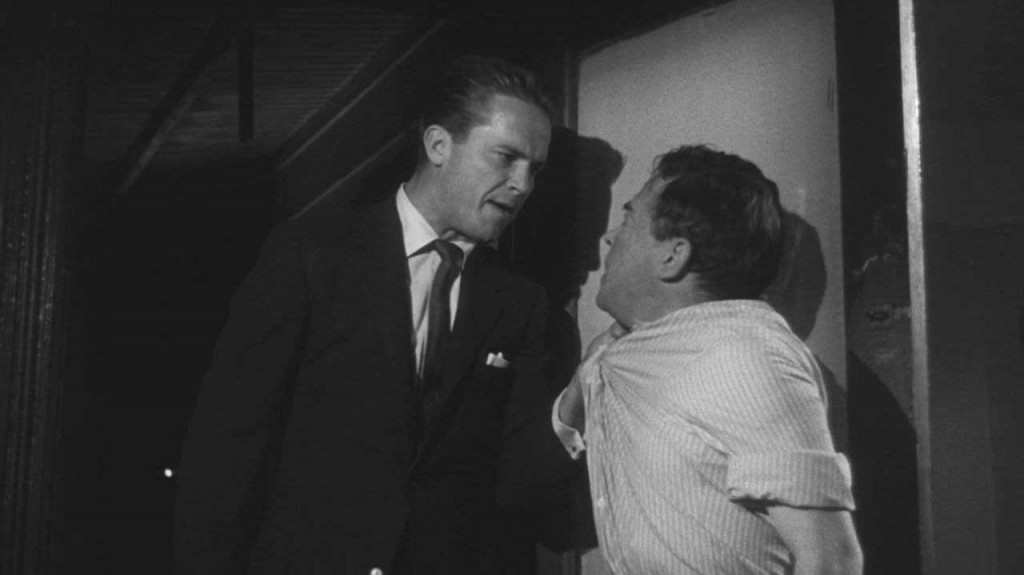 Mike Hammer (Ralph Meeker) is, of course, the lone driver who picks up the distraught hitchhiker. He survives the “traffic accident” intact and wakes up in the hospital with a burning desire to know who the girl was, what “they” wanted out of her, and if he can spin things to his financial advantage. Labeled a “bedroom dick” (and everything sleazy that that title entails), Hammer is tired of entrapping unhappy men and blackmailing them into lucrative gain. “I gotta line on something better. That girl I picked up was mixed up in something big.” He could care less that she’s dead; he doesn’t even seem to mind that he almost died. He just wants to find “the great whatsit” that everyone is so worked up over and figure out what his cut will be. The bodies that pile up along the way, even if they belong to his friends, are hardly worth a second thought.

Meeker turns in a classic performance, providing Hammer with both charismatic grins and haughty sneers. It is often difficult to distinguish between the two, especially whenever women are concerned. They throw themselves at the dark detective like pre-teen teenage groupies at a rock concert, and he laps them up with a smile and a kiss, happy to nudge them, pawn-like, in whichever direction benefits him the most. Some, who know they’re being manipulated, still ask “How high?” when he says “Jump.”

Velda (Maxine Cooper), his secretary, is hopelessly in love with the man, willing to do anything Hammer asks her to, even sleep with another man for information. Their relationship is as complex and damaged as any noir relationship ever was.

Watch the following clip (don’t fret – neither of the clips I’ve included here will give away significant plot details). Apart from the brilliant camerawork by Ernest Laszlo (more on that in moment), the dialogue by Bezzerides that functions on multiple levels, and Robert Aldrich’s masterful blocking and direction, Maxine Cooper exudes enough sexual tension here for any 10 films. Notice her brief smile when Hammer tells her to stop seeing “Mr. Friendly,” quickly replaced by the disappointment that nothing has really changed with him; he’s just frying a bigger fish. Still, she pirouettes inches from his face, daring him to ignore her. Being Mike Hammer, he does just that, and by the end of the scene she has given him everything he wanted and received nothing in return but a room full of stale cigarette smoke. He’s a bastard and she loves him in spite of it.

The only thing more palpable than Velda’s disappointment at Hammer’s rejection is my disappointment after looking through Cooper’s list of credits. Whatever happened to Maxine Cooper? Kiss Me Deadly appears to be her only major role, bit parts on serialized television programs apparently the norm. In fact, her only other film appearances were small supporting roles for Robert Aldrich (Autumn Leaves and Whatever Happened to Baby Jane?), almost as if he kept tossing her bones. It’s a shame she never received more screen exposure, as I would take her over Mary Astor, Barbara Stanwyck, or Ava Gardner any day of the week. 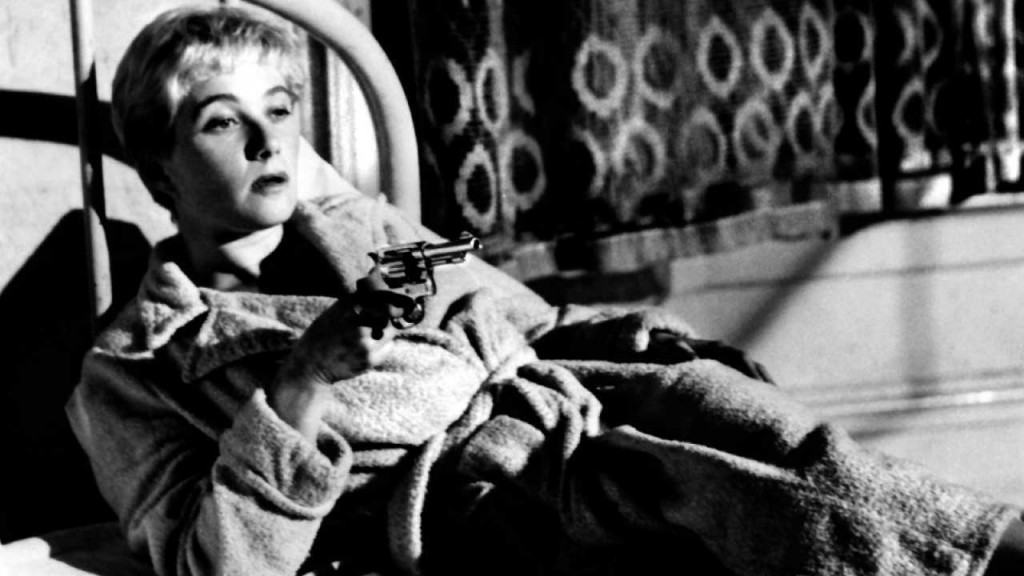 The rest of the cast, buoyed by Bezzerides energetic characterizations (“I was having fun with it. I wanted to make every scene, every character, interesting.” The Independent, Jan. 20th, 2007), are almost as memorable as Meeker and Cooper. Nick Dennis provides Greek gusto as a mechanic with a penchant for fast cars and child-like “Va-Va-Voom!” exclamations; Paul Stewart as Carl Evello, the perpetually smiling mobster who wouldn’t drop his grin even while twisting the knife in your back; and Wesley Addy as an uptight lieutenant who despises Hammer even as he admires him. One scene after another is populated by colorful performances; it’s absolutely amazing what Aldrich managed to pull out his cast in service to what (at the time) amounted to a sleazy B picture. That he did in 3 weeks only heightens the accomplishment.

The cast aren’t the only players who do top notch work here. Cinematographer Ernest Laszlo (who also lensed Billy Wilder’s Stalag 17) crafts some of the most inventive shots since Citizen Kane. Meeker is constantly framed by banisters, archways, and the bars of bed frames, visually representing the ever-tightening noose that is around his neck. All the noir trademarks are in full force: cameras are mounted behind cars as they speed down night-drenched highways; dutch angles permeate the compositions; and stark black and white photography drains all gray from the film grain. But most notable are the number of expertly choreographed extended shots, the longest of which runs over 3 minutes.

In the clip below, the camera begins on a boxer pummeling a speed bag, catches Hammer as he enters the gym, carries him through a conversation with boxing fixer Eddie Yeager (Juano Hernandez), follows him to a payphone, and then cleverly fades into the back of a bathing beauty in the next scene. Notice the little touches that make this cinematic poetry: how the camera piggybacks on an anonymous man to carry it to the stairwell; how the background is loaded with fighters and punching bags and boxing rings but the camera never cuts to the boxer that Eddie and Hammer are discussing; how Hernandez uses a simple cigar to communicate more than any line of dialogue ever could; and how Hammer’s final pronouncement of “Carl Evello” hangs in the air until the next scene, when we see a slight man playing solitaire by the pool, and we instantly know (without any further exposition) that this is Carl Evello and that he is not to be trifled with. Laszlo’s photography, Bezzeride’s tight pacing, Aldrich’s directing, and the on-screen performances combine to create a master class in film technique. Pay attention boys and girls: this is how you make a movie.

The scene is also brilliant for its subtext. Hammer is ostentatiously snooping for answers, dragging information out of unwilling informants, and following the stench that those leads give him, but underneath it all is a simple statement that represents the black heart of noir:everyone is corrupt. Almost casually tossed into the script, the brief subplot (if it can even be called that) involving Eddie, his new boxer, and his track record with previous fighters, illuminates Kiss Me Deadly’s bleak outlook. “You’ll sell him out like you sold out all the others,” Hammer states without passion. “No, Mike, not this one.” “Wait until the odds build up, until you can’t resist.” Everyone’s selfish desires eventually win out, even if they try to fight them, ending in their own, fateful destruction, and if you’re not the one selling out, you’re the one being sold. The good, the bad, the neutral: no one can escape the deadly corruption of the human soul.

The finale and the reveal of the “great whatsit” is one of the most blatant metaphors for cold war paranoia and nuclear angst in all of cinema, superseded only by Godzilla. It has been paid homage in films as varied as The Raider’s of the Lost Ark, Lost Highway, Repo Man, and Pulp Fiction. Having acquired the glowing box, Gabrielle (Gaby Rodgers) bursts into flame, the object of her desire destroying her in the most violent way imaginable. Bezzerides and Aldritch’s statement couldn’t be more obvious: the atomic bomb will destroy us all, and it will be our fault.

In the film noir canon, I consider Kiss Me Deadly to be the quintessential entry. The fatalism hinted at in other pictures is fully embraced here; it is as pure a distillation of the noir sentiment as you will find. Although Kiss Me Deadly is not as polished as Double Indemnity orOut of the Past, that works in its favor. Noir was always the most comfortable in B movie packaging, and Kiss Me Deadly’s aesthetic is down and dirty and covered in sludge, a stark contrast to the polished studio look of the aforementioned films. An unequivocal masterpiece, Kiss Me Deadly is just as powerful today as it was in ‘55.