Mad Money plays out like a litany of missed opportunities, particularly financial ones (ironically enough, considering its title). First there’s the premise: as a heist film concerning three women, it could have functioned as a hybrid caper/chick flick, making it a film that women could drag their husbands/boyfriends/whatevers to, without too much whining from either party. Second, there’s the cast, which—almost any way you look at it—has three potentially fantastic leads. Sadly, it’s dull as a heist picture and undeveloped as a drama. That leaves comedy, which is surprisingly absent, for a film that has a lot of potential to be funny. The result is a dull march from the obvious beginning to the predictable end. 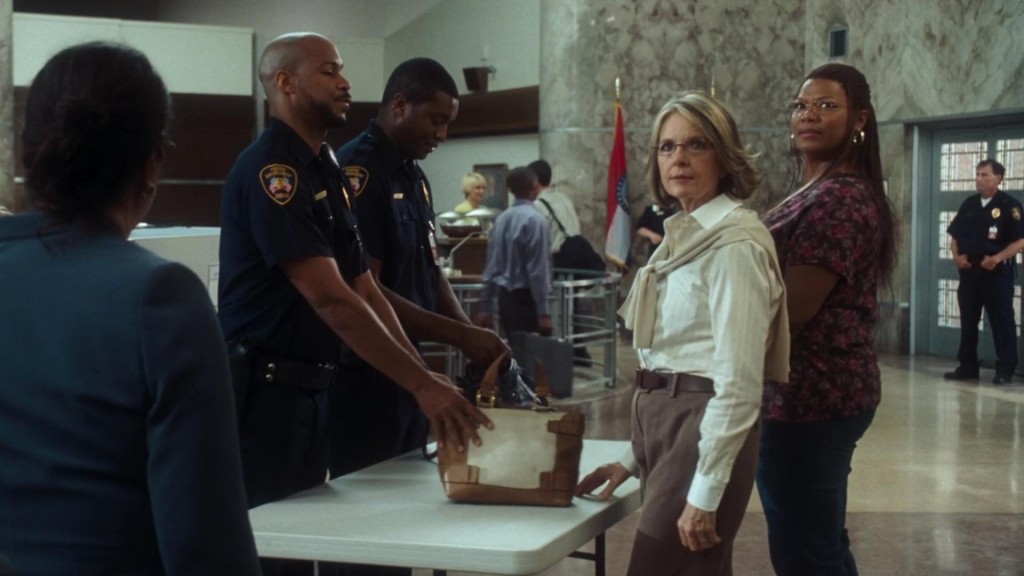 The picture opens with Bridget Cardigan (Keaton), a yuppie socialite, realizing that her husband Don (Ted Danson) is out of a job and they’re in over their heads in debt. Unable to find a “real job” for either of them, she takes a position as a janitor at a federal reserve bank. Unsurprisingly, mopping up bits of dollar bills for $5.15 an hour doesn’t float her boat, and so, together with single mom Nina Brewster (Latifah) and trailer trash twenty something Jackie Truman (Holmes), she cooks up a get-rich-quick scheme: they steal the money. Not all of it, of course—just the bills that are slated for destruction. And since they’re listed as “destroyed,” the theft is untraceable.

The whole thing is pretty ridiculous, if you think about it for a second. It should be obvious to anyone that the moment the government becomes suspicious of the thieves, all they would have to do is check one of the serial numbers on the bills that they’re spending and/or depositing. Of course, this film is a remake of the British made-for-TV movie Hot Money, which was ostensibly based on true events—the trail gets pretty fuzzy there, so I’ve so far been unable to confirm the details—so it is possible that something somewhat like this happened sometime across the pond. Maybe. In any case, it’s still a bit hard to swallow.

Even if you buy the premise, it’s still a pretty dull affair. The heist scheme isn’t particularly interesting or suspenseful—and of course, they use the same simple plan from start to finish, so there’s no Ocean’s 11-style guilty pleasure in watching them pull it off. The storyline follows the exact same trajectory you expect it to: They steal the money, they buy what they need, then they get greedy, then people start finding out and they have to cut them in, then they get caught, then you think all is lost, and then they get away with it anyway.

And if you can get past that, the script is still completely limp. Latifah (Chicago), Holmes (Pieces of April) and Keaton (Annie Hall) all do their best with the material, but the fact remains that their characters don’t change at all throughout the proceedings (aside from learning some vague, obvious lessons about friendship and racial tolerance…ugh). The supporting characters don’t fare any better. The C-list actors they’ve assembled to play the husbands and boyfriends (Ted Danson, Adam Rothenberg, and Roger Cross) are an embarrassment next to the charismatic female leads—and this is a big problem, since they play a surprisingly large role in the storyline. The only character who’s particularly memorable is Sylvia Castro Galan as the Cardigans’ maid Selina—and she’s on screen for less than two minutes. Go figure.

Mad Money isn’t a brain-meltingly awful film, or anything like that; it’s just slightly less than mediocre where it should have been great. If the premise sounds interesting to you, it might be slightly worth a rental; if not, you’re probably better off just getting both versions of Fun with Dick and Jane, and then staying up all night arguing which one is worse. (Actually, that’s not a bad idea. Secretary, cancel my weekend plans!)