Let me be frank: Kirby Dick’s documentary Outrage is completely unwatchable. Agonizingly, tortorously unwatchable. It’s an hour and half of cheap, ugly, digital photography and some of the least interesting interviews and most ear-gratingly awful music ever conducted. It’s a boring, self-congratulating, almost-never-ending mess. I have never been less entertained in my life, and I have never been so amused by playing with my wedding ring. (Eventually I lost control of it and it went flying across the theater; when it did, I found that looking for it on my hands and knees was much more entertaining than the film.) I can’t think of a single reason to see it, and I can’t think of a single person — friend or foe — that I would recommend it to.

So just in case you’re still thinking of going, let me save you the trouble. I can tell you the whole movie in two sentences. Ready? Here we go: Politicians that tend to vote against gay rights initiatives? They’re totally closeted gays.

There. Now you have no reason whatsoever to see it (you owe me one). Mr. Dick (This Film is Not Yet Rated) takes an hour and a half (!!!) to tell you that. Over and over, in excruciatingly boring detail. It’s like gossip hour, only when you yell “Oh no he didn’t!” Mr. Dick doesn’t respond with “Oh yes he did!” — at least not in so many words. (Have you ever seen that episode of The Simpsons where Homer gets a couple of gay roommates who like to flip through channels and point out all the gay actors? That’s pretty much what this is, except with a straight face.)

Charlie Crist. Wait, this guy’s gay? I don’t see it…

Now I don’t want to leave you thinking that Mr. Dick is outing gay politicians for no good reason. Of course he’s not. He’s outing them because he doesn’t like the way they vote. Each one he outs (he focuses on Idaho Senator Larry Craig and Florida Governor Charlie Crist, but there are a half dozen more he touches on as well) is given an animated voting record that shows all their “no’s” on issues like gay marriage, gays in the military, and funding appropriation for AIDS research. Each one has a “conservative” history, and each one also appears to be leading a double life. One that involves copulating. With dudes. Wink, nudge.

Am I being too vague? No? Good.

Mr. Dick’s argument here essentially boils down to some pretty standard pop psychology: Repression of urges leads to self-hatred; self-hatred leads to hatred of others; hatred of others leads to unsavory politics. I have no doubts that some political positions stem from hatred, and I have no doubts that some hatred comes at least in part from repression. The problem is when it’s stated with such certainty as to come across as some sort of Freudian dogma — particularly when the case for such dogma is poorly argued at best and simply taken for granted at worst.

Mr. Dick shows his true colors when he includes a clip of Mike Rogers — a blogger who makes it his business to “out” gay politicians — calling the men in question “traitors to our people.” Whoa, slow down there, Mike! That sort of rhetoric is not only divisive and politically regressive — it’s borderline fascist. I’m no expert, but experience has shown me that people hold opinions for all sorts of reasons. Not all vegetarians love animals. Not all capitalists are rich. Not all war protestors are pacifists. Self-loathing expressed through irrational hatred may be a reason to oppose government funding for AIDS research, but it’s not the reason. Some of these men could simply believe that the money would be better spent elsewhere. Just because the gay rights community has claimed the issue as its own, everyone who happens to be gay should be in favor of it? This is the same sort of prescriptivist groupthink that has been lobbed at everyone from women who dared to oppose abortion, to blacks who didn’t demand reparations for slavery, to white Aryans who didn’t back Hitler. (Yeah, I went there.) Jingoism is our enemy, not our friend. If people can’t think for themselves, what good is this democracy stuff, anyway? 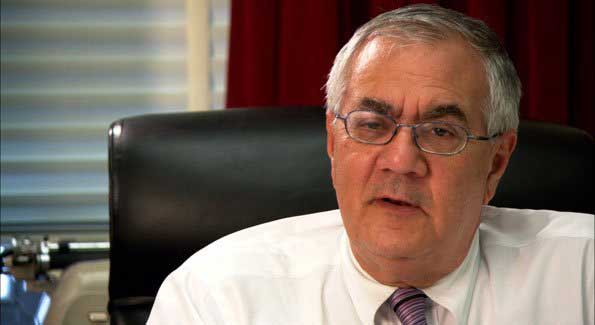 Barney Frank, being at least as gay as Charlie Crist

You might think I’m being a bit too hard on Mr. Dick, but he seems determined to undermine his credibility here from the get-go. The very first sentence in the film (related through some on-screen text) tells us that “There exists a conspiracy to keep gay politicians in the closet. It’s so powerful that the mainstream media won’t report on it.” Really? A conspiracy? When you confuse a general reluctance to report on politicians’ sex lives with the sort of thing that crackpots believe keeps the lizard-men who orchestrated 9/11 in power (and is often modified by the words “vast” and “right-wing”), you’ll forgive me if I think you’re foaming at the mouth a bit too much.

And foam at the mouth he does. Perhaps I shouldn’t be surprised that there’s so much anger in a film entitled Outrage, but what’s truly off-putting about it is that it’s the sort of blindly unthinking anger that’s characterized both ends of the gay rights debate since its inception. Both “sides” (if you’ll allow so crass a term) have spent the last 40 years arbitrarily declaring their viewpoint to be the moral high ground, and then using long-discredited pop psychology factoids to belittle the other side, all while patting themselves on the back for it. It’s lazy, and it’s pointless, and frankly, it wastes countless hours in our political system — hours that could be used to accomplish all sorts of things. Perhaps an individual can be forgiven for blindly clinging to half-baked ideas, but a documentary film cannot.

And, in any case, a film that neither entertains nor educates is inexcusable.