Word-of-mouth and the Hollywood hype-machine will launch Paranormal Activity into the stratosphere (made for $11,000 and it’s already grossed $33 million) before turning around and stabbing it in the back. Overheard I’m-not-making-this-up quotes include “the second coming of horror!” and “the scariest movie of the decade!” Such hyperbole might be merited in a vacuum, but now that the cat is out of the bag (i.e., the Internet), proclaiming it The Savior of Horror will only tarnish the experience for future audiences.

With the business of managing unrealistic expectations out of the way, Paranormal Activity is unequivocally better than 95% of the splatter industry’s yearly output. Its effectiveness lies not in innovation (found-footage films that are – we swear! – based on a true story lost their novelty post-Blair Witch), nor in gratuitous jump scares, but in simplicity. Paranormal Activity is about a young couple who purchase a video camera in order to document the spooky happenings in their house… and that’s it. There is – almost literally – nothing else to the plot. Director Oren Peli, happily restrained by a shoestring budget, focuses on wringing every ounce of creepiness from the nighttime footage. All he does is flip on a few light switches, insert some thump-thump sound effects, and ruffle the sleeping couple’s sheets, but the chill factor is off the charts. You’ll be sitting on a pin – and the theater will likely be as quiet as a dropping one – waiting for the bedroom door to simply creak open a few inches. Less certainly is more. 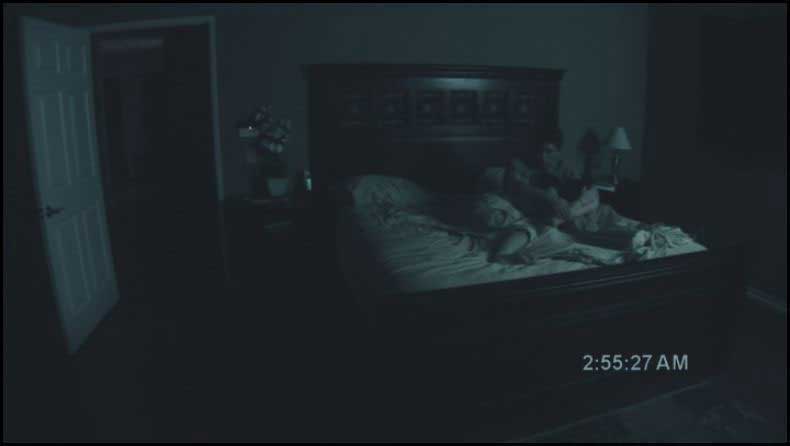 Such minimalist cinema, especially when it has the hokey task of convincing you that ghosts are real, relies entirely on the strength of its performances. Katie Featherston and Micah Sloat (playing, ha-ha, Katie and Micah) are superb in that regard. Their relationship is authentic, their chemistry effortless, and when the freak starts hitting the fan, their mounting fear is unbelievably believable. Small bit parts – the proverbial psychic, the concerned best friend – are likewise bona fide. A false performance would have instantly sunk the film; kudos to Peli and crew for recognizing the necessity of pitch-perfect casting.

Don’t believe the hype. Paranormal Activity isn’t the scariest thing since Jack Nicholson went postal on Shelly Duvall, and the ending (apparently fiddled with by Paramount) feels a bit plastic and out of step with the rest of the film, but considering the upcoming slate of splatter-schlock –The House of the Devil, The Fourth Kind (yet ANOTHER its-so-true-we-promise! flick) and, joy of annual joys, Saw VI – it would be criminal for you to skip out on this ghostly gem.