This review was originally published on August 6th, 2008.

“Well, it wasn’t as bad as Step Brothers.”

Pineapple Express is the worst kind of film a critic must write about. It succeeds admirably at its implied goals, entertains well enough, and doesn’t fail in miserable ways. You enjoy yourself while watching it, but when you leave the theater it flits out of your mind like toilet paper in the wind. As you sit down to pound out a review, you realize you can’t remember anything about it, so you pull your little notepad out that you scribble random thoughts on during screenings, looking for inspiration, only to discover you wrote nothing. The film engendered no thoughts of significant worth, either negative or positive, at least no thoughts that compelled you to record them for later use. You are, in a word, ambivalent. And now you have to write about your ambivalence in an entertaining and fair manner, when all you want to do is go into the other room and watch the latest episode of The Wire.

So, where was I? Oh yes. Pineapple Express was, at the very least, not as bad as Step Brothers, that other Judd Apatow production with man-children in arrested development that came out last week. Here you’ve just got stoned man-children, and it is, if you can believe it, an improvement. Dale Denton (Seth Rogan, from every other Judd Apatow film, ever) and Saul Silver (James Franco, Spider-Man) are infinitely more pleasant to be around than Brennan Huff (Will Ferrell) and Dale Doback (John C. Reilly). Also, Pineapple Express features one less scrotum than Step Brothers does, an improvement that cannot be overemphasized. 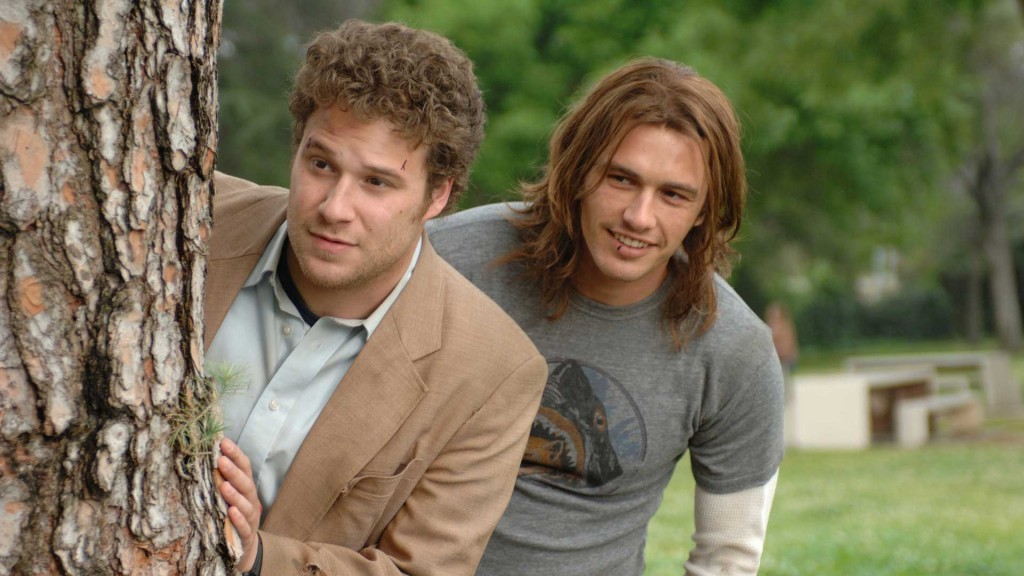 Weed buddies are so cute, aren\’t they?

Dale, a process server who carries around a trunk full of disguises so he can ambush those hoping to avoid subpoenas, smokes dope with passionate zest and Saul, a scruffy space-case who is in a perpetual state of high-ness, sells it to him. Being a valued customer and all, Saul gives Dale a sampling of the rarest of rare weed, Pineapple Express, which Dale then proceeds to smoke outside a house where a murder is taking place. Fleeing in panic, he drops the exotic doobie which, of course, is traced back to Saul and himself, forcing them both to go on the lam in order not to get smoked (thank you, thank you, I’ll be here all week).

I’ve never smoked dope before, but popular culture and common sense tells me that it likely involves a group of persons sitting around, lazing back, and having absurd conversations that stretch on for interminable lengths of time about rainbows and Venezuelan politics and the origins of Voltron. That, in a nutshell, describes Pineapple Express. I found myself constantly getting bored with how long some of the dialogue dragged on until I realized it was simulating the pot experience, and then I was still bored, albeit a bit more understanding of what the film was trying to accomplish. 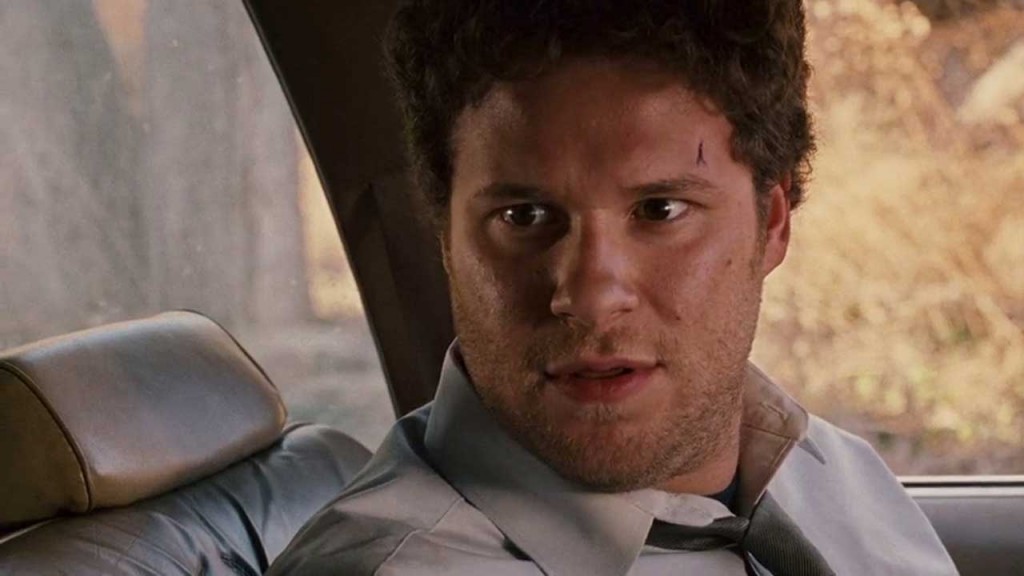 Yes, that’s Seth Rogan in his tighty whiteys. Just be thankful the barndoor is closed, if you get my drift.

But does the film live up to the “stoner action comedy” pseudo-genre label it’s been crowned with? It does, in fact, fulfill that promise to the tee. Including the aforementioned weed-ish conversations, it’s also chock full of ludicrous action set pieces and grisly-ha-ha violence, as well as some terribly funny sight gags (the best of which are in the trailer). Of special note is James Franco’s performance, who proves that he has much more in him than his previous output would suggest (Flyboys, Annapolis, and other films best left forgotten). Saul receives all the best lines and Franco deftly uses them to steal every scene he’s in. Fingers crossed that his upcoming performance in Milk finally puts him on the map.

Not of special note is director David Gordon Green, the indie auteur behind such art house favorites as George Washington, All the Real Girls, and Undertow. Although there are brief glimpses of his very personal aesthetic here (Dale and Saul’s wooded leapfrogging montage, the vintage 70s hodge-podgey set design, and some conspicuous slow-mo all ring faint bells), he fails to leave any kind of significant stamp upon the film. That may be the point, since comedies are all about the yuks and rarely about the director’s style, but it’s disappointing to see Pineapple Express swallow up all of the eccentric quirks that make David Gordon Green such a unique filmmaker.

Will you enjoy Pineapple Express? Probably. Is it worth paying some nine-odd dollars for it? That depends on the level of twinkle that enters your eye when you hear the words “stoner action comedy.” I’d like to insert some kind of witty weed reference here to tie everything up, but my ambivalence is winning out. So instead I’ll just say that Pineapple Express isn’t as dope as it could have been and leave it at that (hardy har har, I’m on fire today).