Alexis Bledel seems determined to become the female Michael Cera. If you don’t know what I mean, consider the similarities: both are young actors that play the same character over and over again; both established their character on television comedies that were vaguely ahead of their time; and most importantly, there’s no real difference between their respective personas. You know the persona I’m talking about: the overly earnest smart kid who’s far too much of a doormat for his/her good. Cera played the character fist in Arrested Development, and has kept doing it in Juno, Nick and Norah’s Infinite Playlist and Year One; Bledel did it with Gilmore Girls,then The Sisterhood of the Travelling Pants, and — yes — even Sin City; now she does the same thing in Post Grad.

The problem with the character in question is that he/she is simply a straight man (or straight woman, I guess) — the lone sane character whose job it is to react to a crazy world — and a straight man is only as funny as the action around him (or her). Imagine if Zeppo Marx had tried to embark on a solo career, and you’ll see the potential for problems here.

Post Grad is problematic from the beginning, because it treats Bledel as its only selling point — she’s the only actor, and the only name, on the poster. Never mind that the cast also features Carol Burnett and Michael Keaton; this movie stars Bledel, and only Bledel. And hey, she’s even playing that character you know and love from Gilmore Girls: that girl who always does the right thing and dreams of working in the world of publishing (okay, she wants to be a book publisher, not a journalist, but does anyone really care?). What could go wrong? 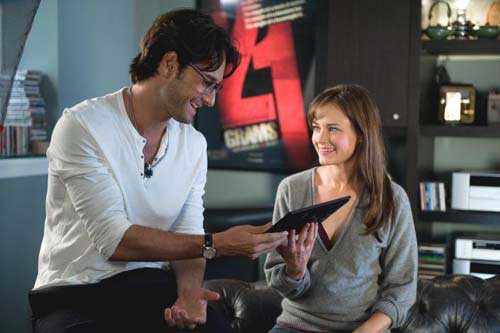 Well, the script, mainly. There’s really nothing here to hate, but there’s just nothing interesting, either. She graduates from school and doesn’t get that dream job she was counting on, so she moves back in with her parents. This is the part where the back of the DVD case usually says, “hilarity ensues,” but it’s my sad duty to report to you that hilarity does not, in fact, ensue. First-time feature writer Kelly Fremon has no idea where to take the story after that, so we’re treated to the usual romantic comedy clichés, plus a some out-of-left-field subplots involving stolen belt buckles and a soapbox derby that never go anywhere and undoubtedly should have been left on the cutting room floor.

The main plot turns out to be the standard-issue romantic-comedy-where-a-career-obsessed-female-learns-that-what-she-really-needs-is-a-man plot, and while director Vicky Jenson (Shrek, Shark Tale) is kind enough to spare us a race to the airport, there’s not much else worth praising about it. Carol Burnett never does anything worthy of her legacy, Michael Keaton never puts on a bat suit, and that annoying little kid drives into a lake for some reason.

It’s not exactly a pleasure to tell you that this movie’s bad. It’s not an ambitious film, so it’s not really a colossal failure; it just isn’t very funny. If there had been a better editor in charge, it’s easy to imagine that it could have been genuinely entertaining (is it just me or does it look like an entire subplot about Bledel’s bitter rival getting her comeuppance got cut out?). As it is, it’s 90 minutes of bland sitcom blah-ness, minus the laugh track,  plus some pretty shameful product placements (they should have just changed the title to Eskimo Pie and Apple Computer Present: Post Grad, and been done with it). It’s not edgy enough for its intended audience (which I assume is college kids), and it’s not bland enough for their parents.