Few films rival the rythmic pacing of well executed poetry, few films induce gasp and tears and laughs; few films leave a stain on your mind and create forums for discussion. Few films are like the gem that is Precious.

Based on the acclaimed novel, Push: by Sapphire, Precious simply breaks your heart, opens you up, and pours within you all the nightmarish events you could possibly imagine in regards to being a teenager with a life spiraling toward hell. Precious Clarice Jones (Gabourey “Gabby” Sidibe) is your sister, only sixteen, and the mother of a child with one on the way due to being horribly raped by her own father, she can neither read nor write, and it appears her existence is purposed solely for the act of abuse by her- my-God-I-can’t-believe-she’s-so- monstrous-mother, Mary, portrayed with ominous fire and rage by Monique (Yeah, she will get an Oscar nomination).  Precious is your aunt, your mom even; she’s the embodiment of all things society has labeled African American women, especially African American women battling educational issues, self-esteem, obesity,  and teen pregnancy. 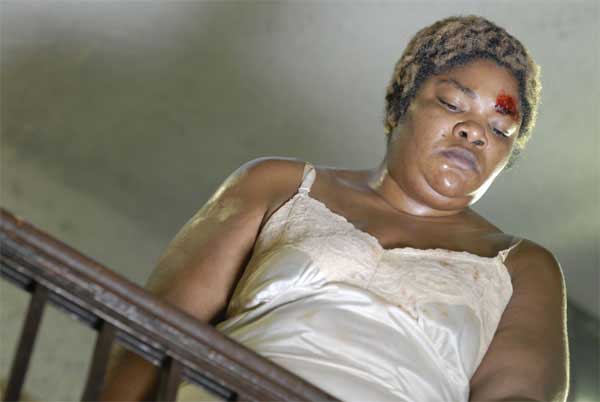 Director Lee Daniels, who helmed the slow moving and quiet Monsters Ball, adapts a poem into an enigmatic film that leaves you fulfilled and angered. The performances are truly remarkable by a physically scaled down cast; Mariah Carey is unrecognizable as a tough, yet sensible, social worker, Lenny Kravitz, as ordinary as he could possibly appear, is a sympathetic male nurse, along with Paula Patton, as Ms. Rain, the only character whose appearance seems softened by makeup.

Along with dead on characterizations and dialog authentic and smothered in the usual honesty associated with at-risk urban youth, Precious captures Harlem via 1987 with an undying ease; and its contrast, seen through humorous, subliminal clips of Precious’ imagination, add depth to the reality that has seized her troubled life.

By far Precious is 2009’s Slum Dog Millionaire, a brave, relentless film both moving and satisfying. It grabs your throat, yells in your face, demands your attention, plays with your emotions, manipulates, taunts, and then after all is said and done, it offers hope and closure to all that is awful and void of brightness. Lee Daniels has brought to the screen a film that audiences would usually steer away from and shows us the “real” of one woman’s fight to gain an identity and self-worth. Newcomer Gabourey “Gabby” Sidibe is refreshing in her film debut, and it isn’t unfair to assume we’ve seen the birthing of a star and perhaps a change that may occur in Hollywood.