Full disclosure: I take my faith fairly seriously, which places me squarely in the demographic that Bill Maher is attacking in his new documentary, Religulous. Given that, reviewing this film could be akin to a member of the Bush administration reviewing Fahrenheit 9/11 or an Orthodox Jew reviewing The Passion of the Christ. Read the following with a salt shaker close by. 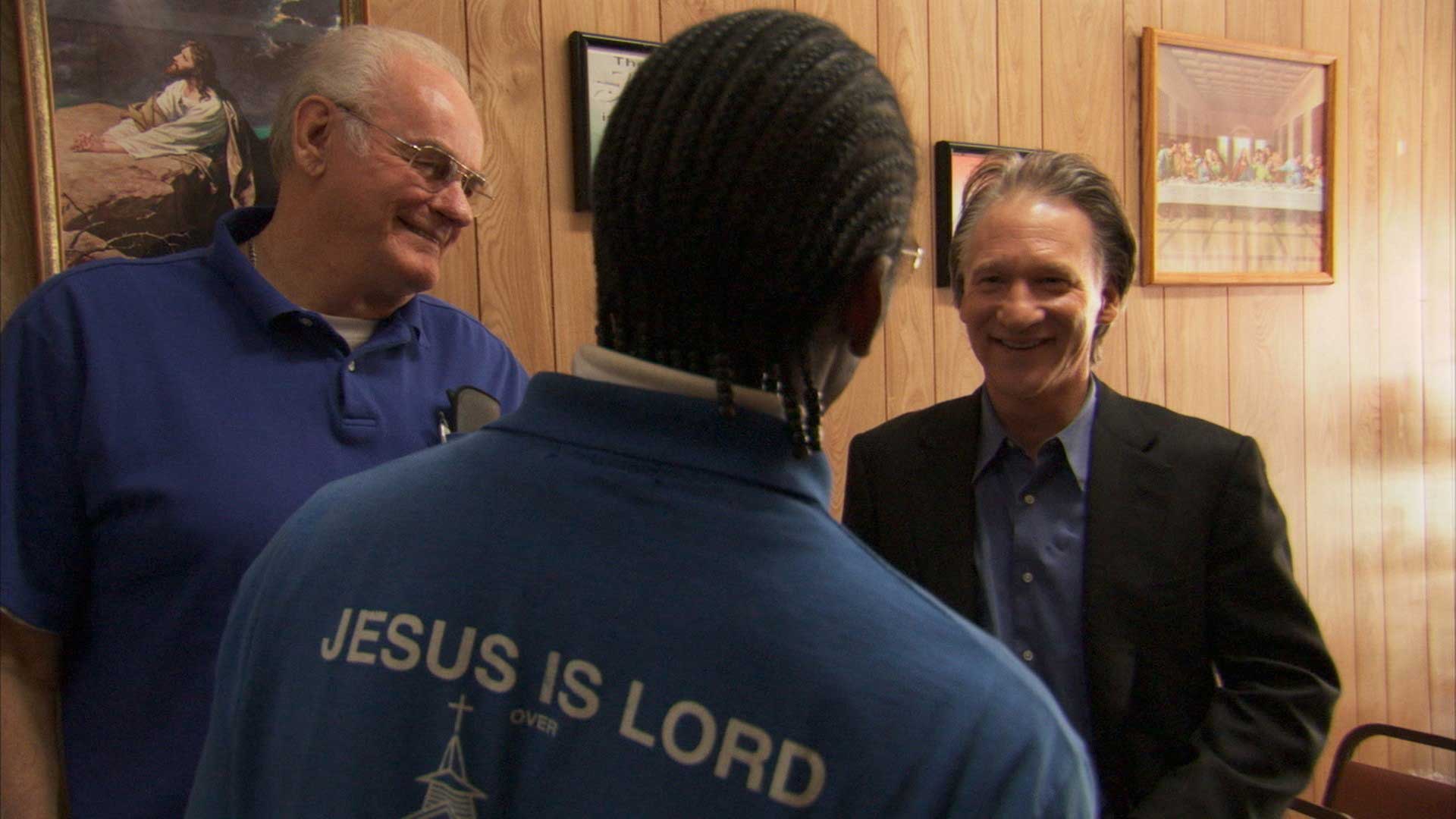 Larry Charles looks every bit as crazy as some of the people Bill Maher interviews.

Maher traipses about the globe, hand in hand with director Larry Charles (hot off of ambushing the crazies inBorat), in an attempt to figure out what makes people of faith tick. Christianity gets the largest whipping from the Politically Incorrect host, but Mormonism, Judaism, and Islam incur a few lashings as well. In terms of tone and structure, Religulous blends equal parts Borat and Michael Moore, and much like the ballcapped Michiganite, Maher’s disdain for his subject matter is palpable from the outset. But really, that’s no surprise for anyone possessing a fraction of gray matter and a cursory knowledge of pop culture; you know exactly what you’ll be getting from Maher and he is more than happy to dish it out.

It can’t be denied that the guy is funny, nor that he possesses a razor wit and a quick intelligence. I laughed more than I expected to, especially when he went after the more corrupt of his interviewees (Maher might not make that distinction, but I do). Taking “Doctor” Jeremiah Cummings of the Amazing Life World Outreach to task for the $$$$s worth of suit, shoes, and bling he brought with him to the interview almost elicited an “AMEN!” from me. Maher splits the bullseye when he points out how explicit Jesus was about the rich, and watching Cummings pitifully backpedal feels like righteous karmic comeuppance (you know, if I believed in that stuff). Unless you’re so offended that your blood is boiling out of your eyeballs, you’ll find something to laugh at here, and it’s unlikely that the highly-offendable are going to accidentally stumble into this one.

It’s a bit more sad, however, when Maher takes common people to task, like the congregants of the Trucker’s Chapel, the owner of an overpriced religious novelties shop, or the unsuspecting sightseers at the Holy Land Experience. Each quietly owns their faith for reasons beyond intellectual certitude, and none of them are equipped to meet Maher’s barrage. The resulting spectacle looks quite a bit worse than candy stealing from babies. Additionally, Maher is playing with a stacked deck, known here as the almighty Editor. 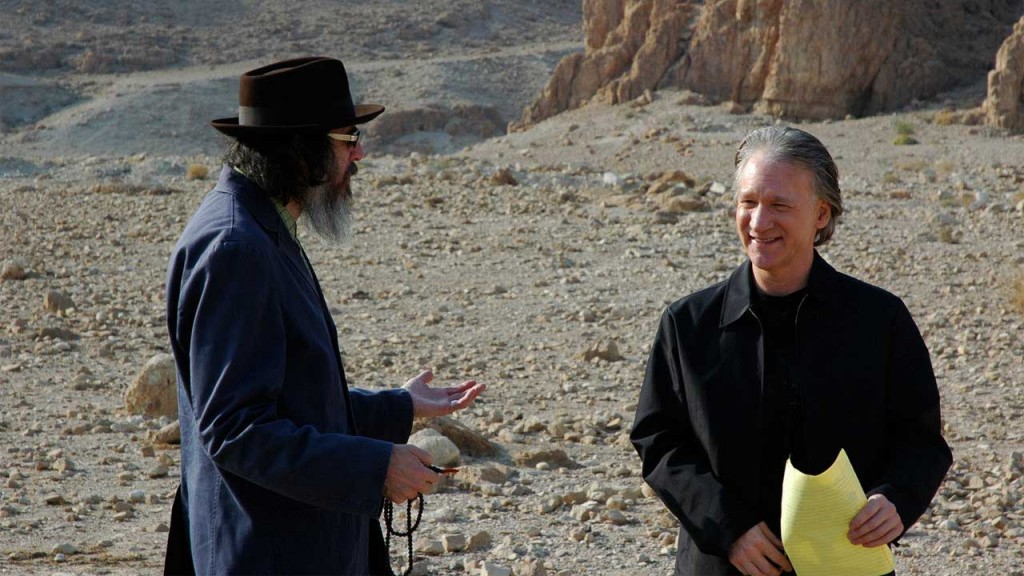 Bill interviews the Son of God himself. Not Jesus’ finest moment.

Gutter crawling reality television comes close, but I’m not sure I’ve ever seen more duplicitous or abusive editing before. Moore is the posterboy for corrupt editing tactics, but in his case he only removes the inconvenient bits; Maher takes it a step further by adding snarky subtitles and juxtaposing random clips during interviews, ripping a page right out of the Seth McFarlane comedy manual. This results in some very funny material, but all of it is of the mock-the-idiot variety. Cutting from an ex-gay counselor insisting that there is no gay gene straight to a scientist saying, “There IS a gay gene,” and back again doesn’t make the subject look like a fool so much as it reveals Maher’s disdain for the intelligence of his audience. No matter how absurd the person in question is, Maher has to constantly stick his face in front of the camera and go, “See? SEE? Isn’t religion cuhhhhraaaaazy?” He doesn’t think you’re smart enough to make up your own mind, and the editing constantly reinforces that notion.

If Maher had kept the film firmly grounded in the humorous, I would have little to complain about. Even the sneer-down-your-nose editing wouldn’t grate nearly as much (Maher is a comedian after all), but he wants to have his cake and eat it too. Religulous is bookended with righteous brow-furrowing declarations and manifestos, which quickly rot whatever value the film might have had. He begins by stating that the point of his journey is to understand the disconnect he sees in those who embrace the absurd (it’s not; he just wants to make fun of them), and he ends with a bombastic rallying cry to eradicate religion (in his eyes the source of untold suffering and evil; never mind that atheists like Lenin and Mao Zedong possess a body count that easily rivals their spiritual counterparts). In particular, the closing call to arms is a shocking miscalculation, similar to the one Chaplin made at the end of The Great Dictator. Rather than allowing the humor and “craziness” of his subjects to speak for themselves, Maher insists on issuing his own personal fatwa against organized religion. Since he spent the entirety of the film mocking his victims and eschewing any attempt at meaningful discourse, his sudden role-reversal from comedian to revolutionary sabotages the few valid points he made and the genuine laughter he managed to elicit. We came to laugh, not to be preached at, Mr. Maher. That belongs in a pulpit on Sunday morning, not in a movie theater on Friday night.

Earlier this year the atheists ranted and raved over the intellectual dishonesty in the pro-Creationism Expelled: No Intelligence Allowed (Richard Dawkins had a field day on his blog). For all their ideological differences, Religulous and Expelled share an awful lot of similarities. He might not find it funny, but I’m sure Bill Maher can appreciate the irony in that.