I sat through all 81 minutes of Space Chimps, but all I could think about the whole time was WALL-E. It had never occurred to me before that hour and a half (which I’ll never get back, by the way), but Pixar managed to make an entire movie set in space, without ever once resorting to extraterrestrials as a plot point. This may not seem remarkable, until you consider how infrequently that sort of storyline actually makes it into production. It’s not hard to imagine the studio board meeting that birthed this film…

“Okay…so we have our Oscar picture for the year. Now we need something that will actually make money.”

“That’s it! Families will line up for whatever crap we throw their way!”

“It’ll be animated, of course.”

“So we’ll need some people who can draw…”

“Draw? No, you idiot! I’m talking about computer animation! The stuff that any idiot can make in his sleep!” 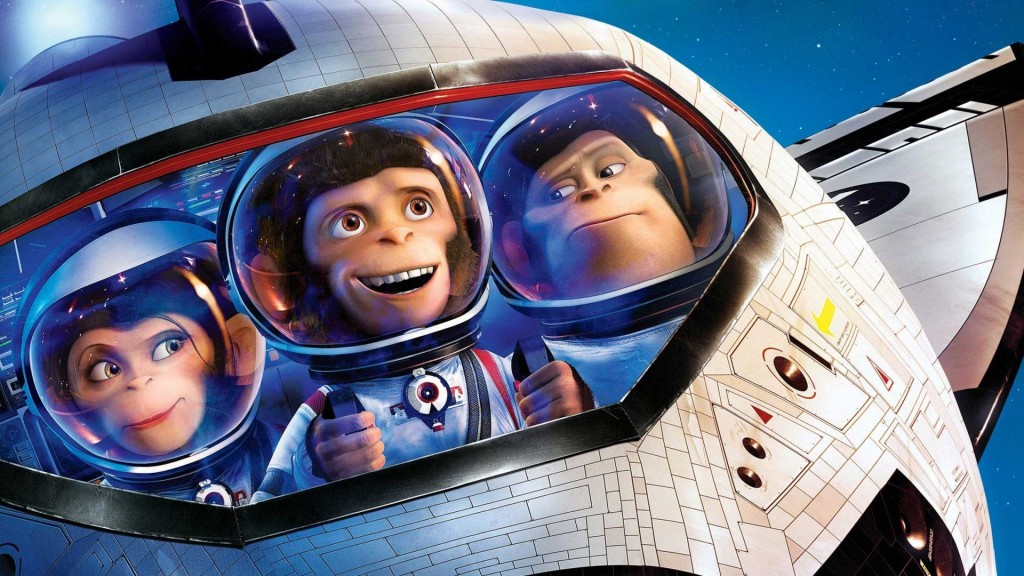 “Oh, yeah! That stuff is gold! So we’ll need some idiots. What will it be about?”

“Talking animals, of course. Why, is there something else you can do with animation?”

“No, of course not. I meant, what kind of talking animal?”

“How about monkeys? Kids love monkeys!”

“Good…good…and what should the monkeys do?”

“I like it! But what will they do in outer space?”

“Encounter aliens, of course. What else could possibly happen in outer space? Oh, and kids love aliens!”

“Great! I want a script by Friday…and some Happy Meal toy mockups on Monday. Nah, forget the script, it’ll work itself out. Just have some toys for me tomorrow.” 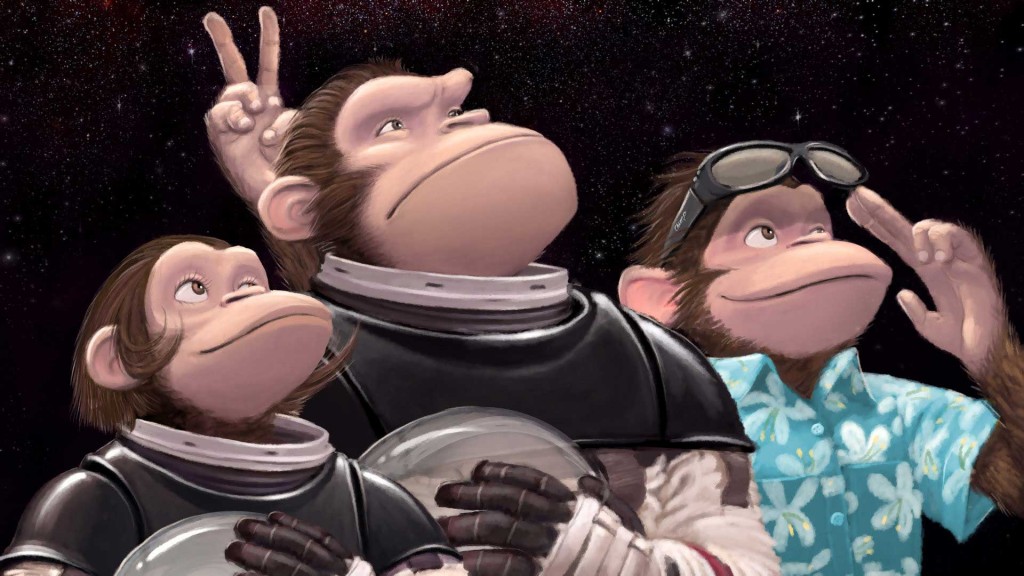 This is the sort of half-baked quality you get with Space Chimps—but honestly, if you can’t infer that from the title, you have no one to blame but yourself. The whole thing plays out about like that one episode of your favorite Saturday morning cartoon—y’know, the one where the characters went into space. (You know the one I’m talking about—it probably aired the week after the one where they went to the old west, and a week before the one where they became pirates. Oh, and two weeks before the one where they went back in time…) At times, it’s impressive merely for being as lazy as it is, but mostly, it’s just dull and eye-rolling—and makes you worry about the generation that’s being raised on this sort of garbage.

Andy Samberg of Saturday Night Live stars as the voice of Ham III, the grandson of a famous chimp astronaut. He works in a circus as a showboating projectile (he’s shot from a cannon nightly), and enjoys the glory and women that come with it (mostly the women, of course). Unfortunately for him, a U.S. senator (Stanley Tucci) has other plans for him. NASA has discovered a wormhole and is going to send a crew of chimps through it; to generate public interest, the senator wants to put Ham on the shuttle. He’s not interested, but unfortunately for him, he’s a chimp, so he doesn’t have a choice in the matter.

From there, the movie basically goes through the motions. The chimps find themselves on a distant planet (evidently designed by animators who spent their entire childhoods playing Toejam and Earl) where they fight an evil dictator alien (named, cleverly, Zartog), meet a cute thing whose head lights up (named, cleverly, Kilowatt), and learn valuable lessons about life. Oh, and the boy chimp and the girl chimp fall in love. Didn’t see that one coming. 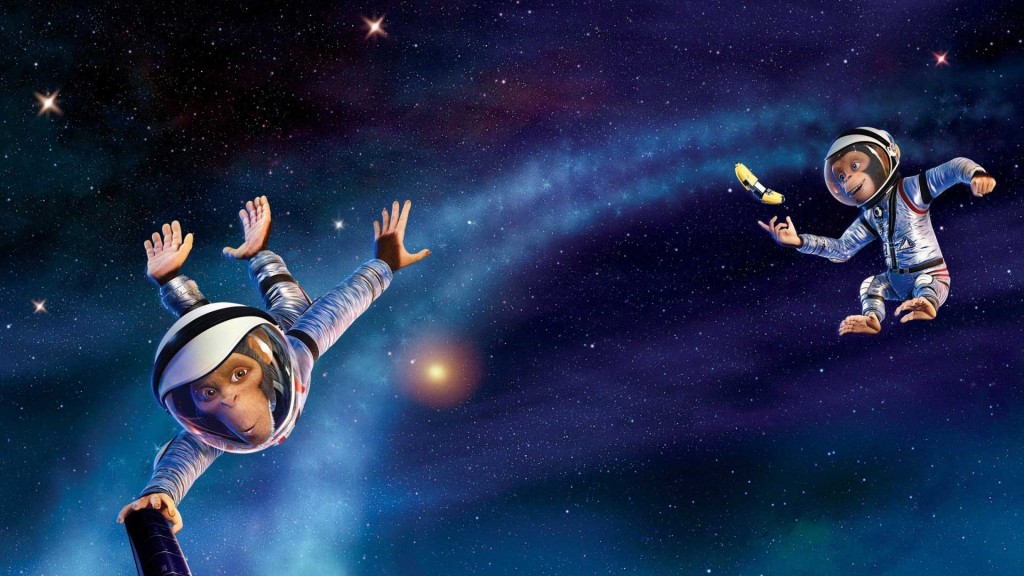 The problem with all this is twofold: First, Ham is so arrogant and obnoxious as a character that he’s impossible to identify with or like. I didn’t want to see him change (as he inevitably was going to do)—I just wanted to see him disappear. It’s nothing short of painful to see him hitting on Luna, the token female chimp (voiced by Cheryl Hines) and know that somehow, inexplicably, she’ll come around and fall for him after all. Come on, now—do we really need to teach our children that the rude, lazy slob always gets the girl? (Doesn’t the world already teach them that well enough?)

Secondly, the whole thing just tries too hard to appeal to adults, when it’s already having trouble appealing to kids. This is the sort of film that thinks it’s really clever to merely reference another film (the obvious ones get referenced here: 2001, The Right Stuff—the latter on two separate occasions) or to make a subtle joke about penises. (I counted four—one of which involved monkey masturbation. How many can you find?). There are occasional cutaways in a style ripped off directly from Family Guy, but none of it clicks—it all feels like a rejected Shrek script. (But I admit there are occasional good jokes—for instance, the Great Cloud of Id, a diaphanus being on the planet that causes everyone to ask each other, “And how does that make you feel?”)

Then again, I’m probably holding this film up to an overly high standard, since its sole purpose is doubtless to launch a series of direct-to-video sequels made to babysit your children. And it’s probably unfair to compare the work of studios like 20th Century Fox with Pixar’s films. After all, Pixar is in the business of making art, while everyone else in computer animation is merely churning out product. But by working in a field that Pixar created, these other filmmakers are setting themselves up for inevitable comparisons—particularly if they’re going to insist on ripping off Pixar’s work. Space Chimps is a space epic following on the heels of Pixar’s space epic, and the screening I attended was preceded by the trailer for Fly Me to the Moon, which apparently is yet another space epic (about—you guessed it—talking flies in space). This slavish aping (get it? it’s a pun!) of the industry leader betrays either an unfathomable cluelessness, or simply a pediaphobic cynicism. Pixar’s films aren’t successful because they’re computer-animated; they’re successful because they’re great art. There’s more craft in a single frame of WALL-E than there is all of Space Chimps, and either studio execs can’t see this, or they simply don’t care. Odds are, they see a pile of money generated by a Pixar film, then mentally distill it into its most easily imitable aspects, and let their underlings do the rest. It makes for a sad existence for animators who would rather work on something meaningful, it’s unfortunate for kids who end up raised on dreck, and it’s annoying to their parents, who have to sit through it with them.

But most of all, it’s sad that no one respects animation as a medium, and this is why.