The opening scene in The Bad Lieutenant shows a sizeable water moccasin swimming within the murky water of an abandoned police precinct. The deluge that has consumed a domicile of justice has seemingly washed the safety of New Orleans away due to the effects of hurricane Katrina. 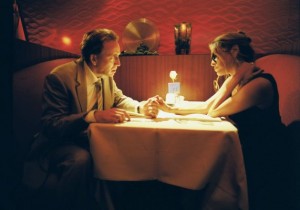 A symbolic vision, the dark and water-logged surroundings fit well with the eventual introduction of director Werner Herzogs latest film-in which antagonist Terance McDonagh-portrayed by Nicholas Cage with fervor and zeal void in his last few roles-is a character whose outer layers and soul resemble the worst kind of snake: a corrupt, amoral cop.

Flanked against the dismal cynicism of post Katrina, The Bad Lieutenant isn’t your typical examination of good cop gone bad; it is constructed with a multitude of abstract ideas then one may appreciate. Its dark view of an embattled city offers little hope in regards to ridding its criminal element during the throes of disaster, and shows a side of New Orleans rarely seen by those only familiar with its excessive debauchery offered on famed Bourbon Street.

Herzog intersperses a reptilian theme cleverly, infusing his often off-putting camera angles and symbolism in places where transitions are craved. It appears, frankly, that the goal is to linger within a scene, and seduce the viewer into taking a mental survey as to what may be the purpose. It appears he wants the viewer to follow McDonagh, and all but gasp as he gambles and snorts his way through an intricate murder investigation involving illegal Senegalese immigrants.

At times the pacing and scenarios border ridiculous, and teeter on the edge of comedy; but Herzog and a cast that includes Eva Mendez, Val Kilmer, rapper turned actor Xzibit, and Vondie Curtis Hall, mesh well with the unorthodox dramatics offered in Bad Lieutenant; but it is hardly enough to make Bad Lieutenant a remarkable film, an effort only tolerable because of Nicholas Cage’s performance. Undoubtedly, as McDonagh, Cage often appears as though he’s improvising, playing the role as if it will be his last. His [Cage] bravery makes Mcdonagh an antagonist character rivaling the wretchedness of Alonzo in Training Day, and we want to see how he [McDonagh] comes out on the other end.