Rupert and Kristin Isaacson had an idyllic romance.  According to Rupert, when he first saw Kristin he knew she would one day be his wife.  He took special measures to ensure this would happen when he asked her to marry him on their first meeting.  They married and settled in Texas, Rupert working in journalism and human rights, Kristin teaching psychology.  When their son Rowan was born 2002, everything had seemingly fallen into place for them as a family.

It all fell shockingly apart when Rowan was diagnosed with autism in 2004 and The Horse Boy is their story; a beautiful picture of a family’s love for their ailing son, a love that manifests itself in an unconventional journey across the world to heal the little boy’s raging autism. 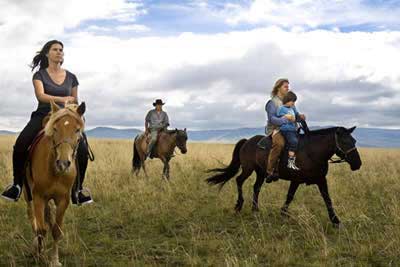 The family begins their journey.

Unlike some cases of autism, Rowan Isaacson’s case is debilitating.  At 5 years old, he was still not potty trained.  It was impossible for him to interact with his peers and his tantrums—caused not by physical circumstances but by events inside his brain—made him inconsolable, leaving his parents at a dead end when it came to helping him.

Anyone who has suffered from mental illness or walked alongside someone who is struggling will immediately identify with the Isaacsons.  To see any child suffer is unbearable, but to see Rowan suffer so uncontrollably and inconsolably while knowing that nothing can be done to stop the pain is nothing less than heartbreaking.

The only thing that the Isaacsons found that calmed their son’s raging mind were animals—particularly horses.  Confronted with a horse, Rowan’s tantrums would stop and his mind become calm.  Animals would run to him and be uncharacteristically gentle.  This puzzled Rupert and caused him to do some more research.

Having worked in Africa with human rights organizations, Rupert was aware of traditional healing ceremonies performed by tribal shamans.  He had seen people cured of a variety of illnesses, but eventually found that the only place that still practiced Shamanism was Mongolia, the country where, coincidentally, horseback riding originated.

Not knowing what to expect, the family flew to Mongolia and started their journey in the plains.  In the film, it comes as a shock when they are made to kneel on the grass next to a man beating a loud drum, and allow themselves to be whipped by a shaman while little Rowan screams in a tantrum in the background.  Kristin is even asked to wash herself with a special soap to rid her of a black spirit.  “You have to stand in the direction of your country,” the shaman advises, “and you have to wash your lower body where Rowan was coming out [during birth].”

Think what you will of these extremes. The Horse Boy is not a call to embrace shamanic tradition as the key to healing a child of severe autism.  In fact, even Rowan’s mother Kristin remains skeptical in the end as to whether the shamans were the key to Rowan’s healing.  Rather, the film is about fidelity and how commitment to the health of an ailing child is the most necessary component for renewal.

The family journeys through the mountains, where Rowan’s tantrums worsen as comforts are stripped away and the days achieve no pattern of normalcy.  He is incontinent, constantly screaming, but his parents never lose their patience.  Rooted in deep love for him, the spare hopeful moments are enough to keep them going.  Abandoning any adult agenda, they press on even through their own great discomfort.

The film features interviews with leading scholars and autism experts including Dr. Simon Baron-Cohen (cousin to Sacha Baron-Cohen of Borat fame) of Cambridge University and Dr. Temple Grandin, author of a book about using autism to better understand animal behavior.  Their expert opinions give the film an added sense of immediacy, but constantly seeing the Isaacsons go through hell to bring their son a sense of peace is never less than powerful. 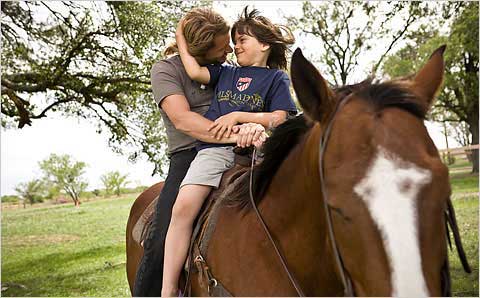 At one point, Rupert and Rowan run through the plains of Mongolia through herds of goats before a brilliant sunset when the cameraman catches up with an exasperated Rupert.  “Quite an adventure,” the cameraman says to him. Panting and sweating, Rupert looks into the camera and simply says, “I love my son.”  A huge smile breaks across his face as he runs to catch up.

Yes, the film makes us aware of autism, but it’s in a moment like this that we get to glimpse what love it truly about.  The power of a father’s fidelity is the lasting effect of The Horse Boyand the spark that ignites a flame of hope that burns all the way to Mongolia and back.