If you look closely at The Informant!, Steven Soderbergh’s new based-on-a-true-story comedy, you just might find a scene that doesn’t have a bust of Abraham Lincoln in it.

Our sixteenth president graces nearly every scene. He’s just sitting there, in plaster or bronze form, smiling at the camera like he was Superman and this movie was Seinfeld. At first, I was wondering why there were so many Lincoln busts. After all, this is a movie about trust-busting; surely a bust of Teddy Roosevelt would be more appropriate? But then it hit me: Abraham Lincoln never told a lie! And this movie is about a guy who’s always lying! Get it?

No, really: do you get it? Because I’m pretty sure that’s the whole joke. Also, I’m fairly certain that it’s the only joke in the movie. The film, which relates the story of Mark Whitacre, a high-ranking whistle-blower at the chemical company Archer Daniels Midland (ADM), tries to tell a true story and be funny at the same time; somehow, in the course of its two (long) hours, it forgets to do both.

Let me start with the first point: There is a true story here. ADM really was the subject of a multi-year investigation by the FBI regarding its price-fixing practices with regard to certain chemicals. Unfortunately, very little of that story is actually told. This is actually a biopic of Whitacre, who, due at least in part to his bipolar disorder, was a pathological liar — and somehow, director Steven Soderbergh has taken the old mantra “keep ‘em guessing” a bit too literally. The upshot is that Whitacre (played here by Matt Damon) is constantly saying things, but Soderbergh never bothers to show us which of them are true. In other words, if you’re not already intimately familiar with the case, you’ll be lost, and probably bored. 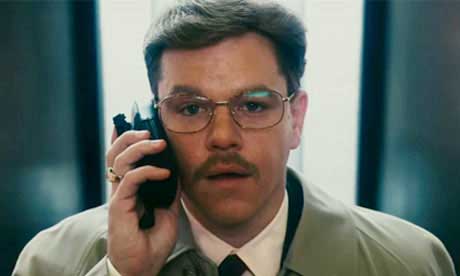 As to being funny, I’m not sure who dropped the ball here, but I suppose we should have been tipped-off by the fact that whoever titled the film was convinced that exclamation points are the epitome of wit. The film itself is just as overwrought and half-baked. Matt Damon, dressed as a dork! Ha ha ha! Didn’t computers from the early nineties look funny? Ha ha! And hey, Abraham Lincoln sure gets around! Also unnecessary are the constant non-sequitur voiceovers from Damon, which serve to remind us again and again that This guy’s mind wanders!, and no doubt are covering up necessary plot exposition. But they’re funny, right? Well…no, and by the time they actually start telling you important things, you will have stopped listening a long time ago.

It’s likely that I’m being a bit too hard on this film. I’ve never been impressed by twisty-turny plots (mysteries and spy movies are pretty low on my list of genres), and I’m certainly not impressed by storytellers that lie to me (you’re telling the story here — it takes absolutely no skill to mislead a passive listener). But I don’t feel terribly bad about that, seeing as this one is sure to get a generous reception from most of the critical establishment. After all, it’s a period piece! And it took guts for Matt Damon to wear that stupid mustache, right? And this one’s from Steven Soderbergh — that visionary who knew the world needed not one, but three remakes of Ocean’s Eleven! That counts for something, right?