It’s strange to think about it in an era when it’s impossible to escape the ubiquitous “Disney Princess” brand, but the venerable animation studio produced all of three princess-themed films during Walt Disney’s 40-ish year tenure there. Of the nine princesses included in the standard lineup, six are from the last 20 years (that translates to twice as many princesses, in half the time, for those of you keeping score). Why the sudden flood? A lot of it has to do with the studio’s one creative genius passing on and leaving his place open to businessmen. The Little Mermaid was a hit in 1989, so the studio continued to base their films on the same formula: plucky, independent princess; dashing-but-bland hero; goofy comic relief sidekicks; ugly villain; six Broadway-style songs; lots of cleavage.

I guess you could argue that it worked: when they started deviating from the formula, they stopped raking in the bucks pretty fast. It’s probably not a coincidence that their films from the early 2000s — Atlantis: The Lost Empire and Treasure Planet, among others — were some of the biggest flops in Disney history, and led the studio to give up hand-drawn animation altogether. It was a decision that was roundly criticized, but fortunately it didn’t last long — once Pixar execs were on the Disney board of directors, they insisted that traditional cel animation be brought back. After all, that stuff is kind of what Disney does. 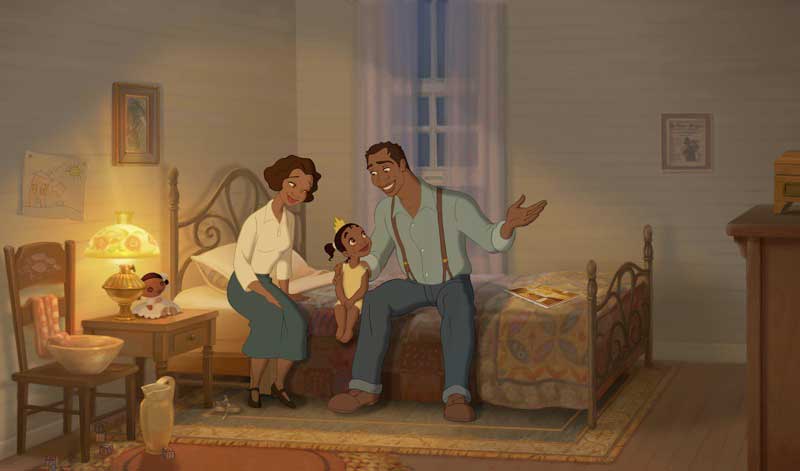 So here we are. The Princess and the Frog is the new hand-drawn animated Disney film. With it, the princess theme was reinstated, co-directors John Musker and Ron Clements were brought back (after being fired in 2002 for nearly bankrupting the studio with the notorious Treasure Planet), and half a dozen more songs were written. Also, the Disney Princess-branded merchandise was rolled out the door.

If I sound like I’m rolling my eyes a bit, I apologize. I’m really not (though I’m also well aware that if I stop being sarcastic, you’ll stop reading this review). Truth be told, I love animation, and I think Disney has been (and is) the source of some of the finest the art form has to offer. I even count Treasure Planet as my personal favorite movie ever (though, for obvious reasons, I’m reluctant to admit this in the presence of serious film buffs). So, of course I was thrilled to see Musker and Clements return to the animating desk, and I’ve been holding my breath waiting for this film since I heard about it more than two years ago.

So yeah, I walked in with a lot of baggage. But the from the first frame, I was still completely blown away. The oil paintings of 1920’s New Orleans (yep — a fairytale set in the Jazz Age — how cool is that?) are stunning. Randy Newman’s jazz/blues/gospel-inspired score is incredible. The character animation is some of the most beautiful, consistent and fluid to come out of the studio since The Lion King. From the first few notes of the first big song and dance, I was sold. 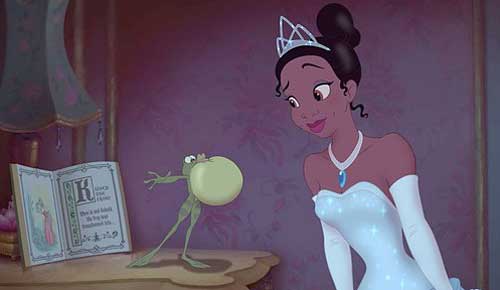 “Sold”? Who am I kidding? I was literally on the edge of my seat, tingles going up and down my spine, tears in my eyes. I couldn’t remember the last time I saw something this beautiful on the big screen.

But alas, the magic didn’t quite last. Twenty minutes in, the lead characters turn into frogs and are banished to the bayou, and everything slows to a crawl. The pastel rainbow of New Orleans is replaced with a dull, drab, brown-and-green swamp. The beautiful human character models are replaced with lazily drawn animals. The spectacular voice of Broadway actress Anika Noni Rose (who voices the titular princess, Tiana) never sings again (not counting a few lines here and there), and a lightning bug with an annoying Cajun accent (voiced by admittedly talented voice actor Jim Cummings) gets not one, but two songs.

It’s a film that sets you up, but fails to knock you down. It’s hard to say who dropped the ball — Musker/Clements films, as a rule, all have serious pacing issues (Aladdin, Hercules, and Treasure Planet all move at a breakneck pace, turning corners with reckless abandon). Producer John Lasseter (who directed Toy Story; Monsters, Inc; and Cars) managed to turn Disney’s Boltinto a masterpiece last year, but he’s never produced a traditionally animated film, and he’s never produced a fairytale or a musical. But more than anything, I’m going to bet that this one was rushed out the door a bit too fast, perhaps in an attempt to announce Disney’s triumphant return to 2D animation.

Well, it ain’t exactly triumphant, but there is still much to like about it, and there is even much to love. While they use the best song up in the first act, Newman’s other songs are still quite charming. The breathtaking detail of New Orleans and the psychedelic voodoo sequences are truly something to behold. Louis, an alligator who wants to be a jazz trumpeter (voiced by Michael-Leon Wooley), practically steals the show in the bayou. And, as every article written on this film has pointed out, Tiana is the first black Disney princess. 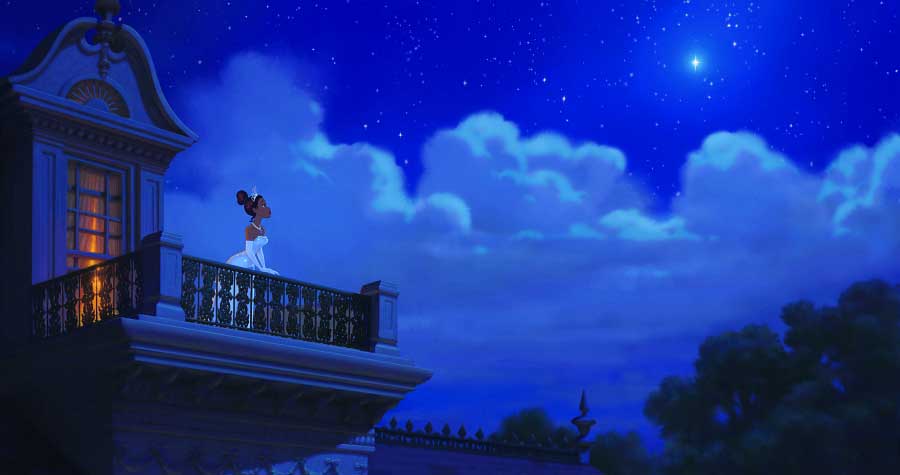 I’m, of course, a white guy. I can’t pretend to know what it’s like to go through life as a black female, seeing whiteness held up as a standard of beauty in all media, and I’m probably not even allowed to bring it up, by standard PC rules. But there is one thing I can’t deny: being in a theater filled with little African-American girls, enthralled to finally see a beautiful princess that looked like them, is something I’ll probably never forget.

And something like that is a million times bigger than pacing issues.