A few months ago, there was some controversy surrounding Michael Haneke’s remake of his own film Funny Games. In addition to the obvious disagreement over the film’s inherent value, many questioned why Haneke felt the need to remake himself. Bryan Bertino’s The Strangers answers this question definitively: Because, if you don’t (and often even if you do), Hollywood will. And they’ll royally screw it up.

The Strangers is essentially the exact same movie as Funny Games, except dumbed down so the target teen audience can understand it, and without the philosophical underpinnings, so people don’t feel bad about enjoying the sight of a young couple getting tortured to death. Most of the images and motifs are lifted directly from Haneke’s opus of audience-condescension: a couple alone in a summer home, a poorly aimed shotgun, ironic use of recorded music, a big blood stain on the wall. It’s possible this is all coincidence (after all, it’s not like the premise here is anything new, by any stretch of the imagination); if that’s the case, this is merely unfortunate. If not, it’s plain lazy, at best. But the fact remains that The Strangers will be insulting to horror fans, and offensive to nearly everyone.

The film starts off with about ten minutes that would seem to promise a good movie. The two main characters, Kristen (Liv Tyler) and James (Scott Speedman), are driving into the country in silence. Kristen is crying. At this point, first-time director Bertino has hooked us: Why is she crying? What happened?

Then, about ten minutes in, he tells us. 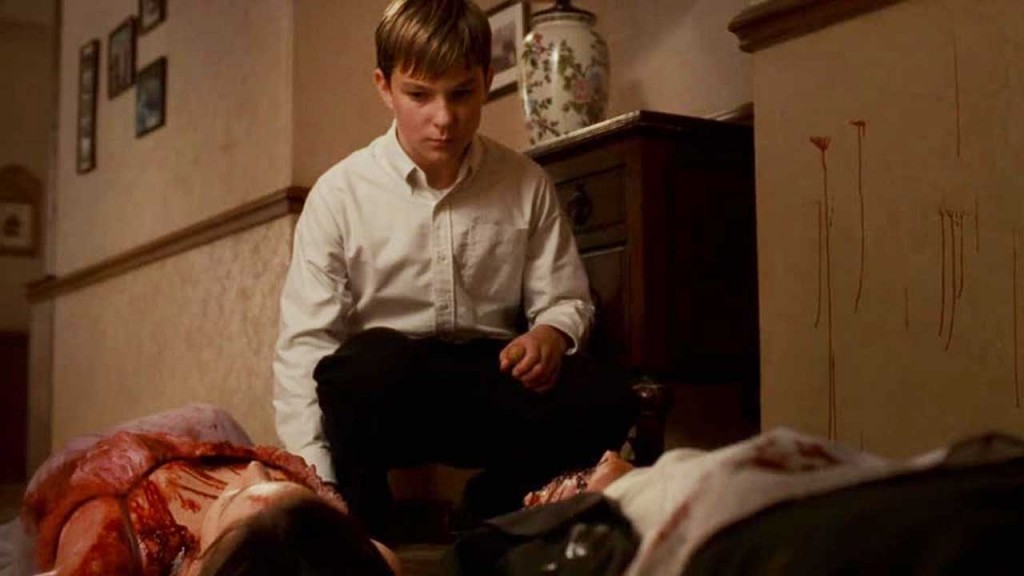 Oh…so he proposed? And she said no? But they already had a weekend at this cabin planned, and nowhere else to go, so they went anyway, and now they’re stuck together and miserable? And they have conflicted emotions, which are ambiguously manifested in their still-burning lust for one another? Great! Sure glad we got that boring characterization out of the way, so we can proceed with the bloody mayhem! (If Liv Tyler’s face is still intact at the end of this thing, I want my money back. And please tell me the characters will do stupid things, like run directly into danger! Man, I am psyched…)

So anyway, now that we know the only interesting thing that there is to know about this couple, it’s time to treat them like so much hamburger. So first we get a knock at the door at three in the morning. This is, of course, scary. Just in case the audience doesn’t catch the scariness, we follow it immediately with a bunch of crashing percussion and chaotic, atonal strings. This, as any horror movie director knows, proves scariness beyond a doubt. So, of course, they open the door. Wait, what? It’s just a girl? And she just wonders if her friend is there? Oh—for a second there, I thought it would be scary. These filmmakers are masters of suspense. Wow.

Oh wait, never mind. She actually is a serial killer. And she brought two friends. And they all wear masks. Because masks are scary (particularly masks that look like cute dolls—man, I love this “irony” stuff!). So the rest of the movie proceeds about like you’re probably guessing it will. These three killers spend the evening toying with their victims. First they go inside and scare them. Then our happy couple runs outside and tries to escape. Then our friendly neighborhood killers meet them outside and scare them again. So they go back inside. So they scare them there. This is all, of course, underscored by a whole lot of pounding percussion and scratching violins, just to make sure the scariness of it all isn’t lost on you. Of course it all climaxes with the unmasking of the killers, and then Liv Tyler desperately asks why they’re doing this, and one of them delivers the line that you’ve already heard in the trailer. At this point there’s about ten minutes of film left, so I’m thinking maybe we’ll finally get some actual exposition—anything to justify the disgusting-but-actually-pretty-boring carnage we’ve just witnessed—but instead Bertino gives us one more lame jump scare. Thanks, Bryan! That one (unlike all the others I just saw) really made my day! What a great movie. 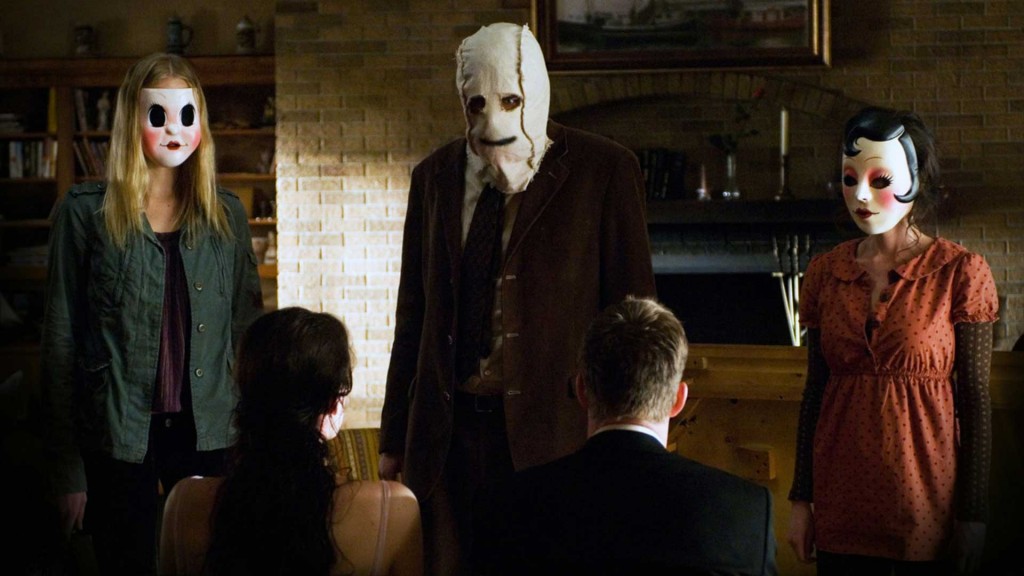 OMG, where did she get that cute jacket???

Of course, I’m left wondering, who likes this crap? The answer, apparently, is everyone. As I was leaving, I saw a line of people—all the way back to the door of the building—waiting to get into the theater. I’m not usually one to speak to strangers, but I had to warn them. You’ve already wasted your money. Don’t waste your time as well.

Ugh. Well. Let me close on a positive note: This film is the screenwriting and directorial debut of Bryan Bertino, who sold the screenplay as a spec script to Vertigo Entertainment—who then asked him to direct, despite the fact that his only real set experience was as a gaffer. Given that, Bertino’s actually showing some promise here. The lighting, the cinematography, and the editing are all pretty good; one imagines that with a little bit more experience and a slightly better script, Bertino could actually make a solid film. Heck, even this one might have been legitimately scary, if the score was…oh, I don’t know…COMPLETELY REMOVED. So who knows? Here’s hoping the guy’s career doesn’t end here. In the meantime, there is absolutely no reason for you to see The Strangers. Buy a ticket so Bertino can feed his kids; then tear it up and go home.