The Way We Get By is a fantastic documentary by writer/director Aron Gaudet. It is about three older people and what they’ve gone through in the last five years as the self-appointed welcoming committee for American troops as they return to native soil. The film is predominately set in the Bangor Airport in Bangor, Maine, and the homes of the welcomers.

The Way We Get By is a short documentary that was made for the long-running PBS television series P.O.V. It’s a film about nothing, and yet, everything. By that I mean that the stories don’t seem to be as heavily influenced by the director as other documentaries might be. And the many themes that come across in the film (loss, loneliness, family, spirit, etc.) are universal themes.

The style presented in the documentary keeps these stories fresh and interesting. There’s an amazing rhythm from story to story that keeps it going. One style in particular reminded me of David Lynch’s on-going Interview Project, which centers around individual stories. The similarity lies in the edit, where the interviewee’s audio track is dubbed over a different shot, trying to capture the right emotion for what is being said.

Each person in The Way We Get By is a dear soul, and I instantly connected with William, Joan, and Gerald on an emotional level. There’s so much pathos here. Heck, the preview itself had me tearing up. I found one line from Gerald to be especially poignant. When asked why he was doing what he was doing, he replied, “Be nice to somebody and that makes you feel nicer. That’s the only way you can deal with it.”

I loved seeing the different attitudes and opinions of the greeters as well. I love how these people, even the ones who don’t support the war, are there to support the troops regardless of their stance. That in mind, I wouldn’t call The Way We Get By an anti-war film. Rather, I think anti-loss would be a more fitting term. 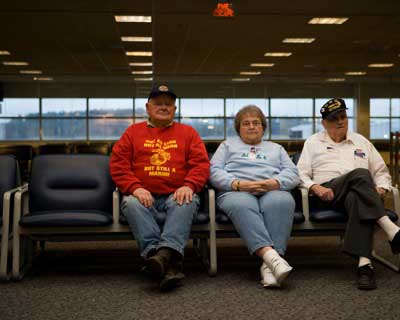