NOTE: Two of the screencaps within this review contain depictions of violence and strong language.

As a child, when Mark Millar was first introduced to comic books and superheroes, the question he immediately had was, “Where do they all live?” His older brother, never one to pass up a golden opportunity, told the little tot that all of the superheroes were dead because the super-villains had teamed up and wiped them out. While briefly traumatizing him, the prank would also become the basis for his hit 2003 comics mini-series, Wanted.

I picked up a copy of Wanted a few months ago in anticipation of the film. It was unequivocally one of the most sadistically violent, amoral, and thought provoking things I had ever read. The film, sadly, retains the first, waters down the second, and jettisons the third completely.

Wesley Gibson (Hollywood It-boy James McAvoy) is a white collar worker trapped within a miserable existence of spreadsheets and TPS reports. Full of self-loathing, his porky boss abuses him, his girlfriend is cheating on him with his best friend, and he takes copious amounts of anti-anxiety medicine just to function. As movies about depressed white collar workers are likely to progress (hello Matrix rip-off), another world hides beneath the surface, our hero awaiting only his Otherworldly Boatman (in this instance, Angelina Jolie) to ferry him across to the other side. 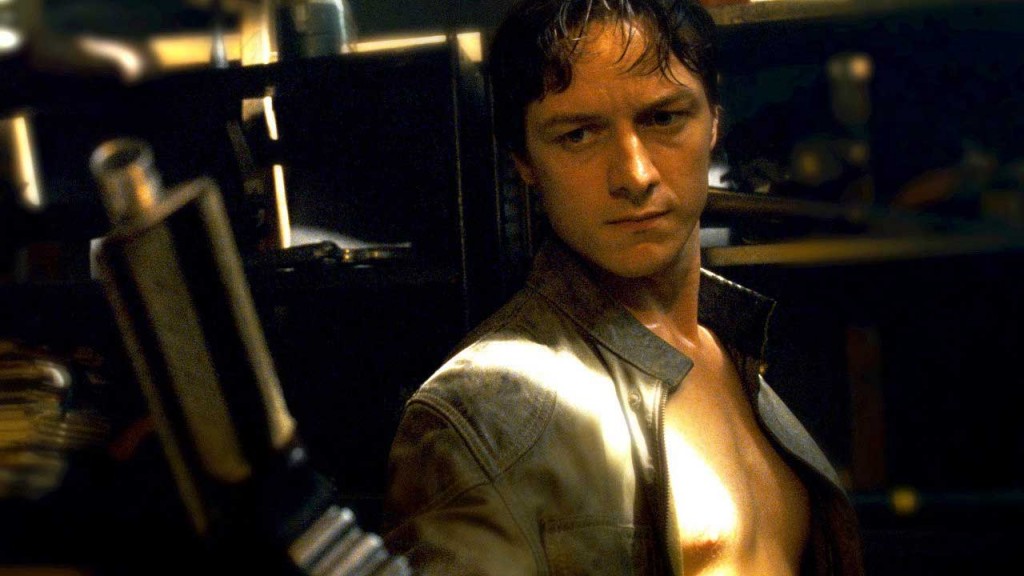 Wesley’s father, it appears, was a super-secret assassin in a super-secret society called The Fraternity that follows death orders given to them by a super-secret loom called the Loom of Fate (yup, you read that right). Dear old dad is dead, killed by a rogue agent, and Wesley, who has inherited his father’s superhuman abilities (including curving bullets and millisecond reaction times), is being brought into the fold to exact revenge. Seeing as his life sucks, he’s only too happy to oblige.

When asked whether or not there was ever pressure to tone down the violence found in the comics, Millar is on record as saying that “he would have walked” if that had ever been the case. And while around 70% of the source material is intact (per Millar’s estimation), the brazen tone of the original has been neutered into oblivion (which apparently doesn’t bother him). During the film’s training montage, Wesley is beaten to a bloody pulp, instructed in the art of the knife, and shown how to curve bullets. In the original comic those things happen, but he also has his conscience desensitized by slaughtering hundreds of live cattle, sniping random people on the street, and raping A-list celebrities (because all the heroes are dead, the super-villains can operate with complete impunity). In the movie, the Fraternity justifies its assassinations with the mantra, “Kill one, save a thousand” (Jolie provides a weepy backstory about a murderer who killed her parents because a Fraternity member had wussed out on assassinating him). In the comics, Wesley walks into a police station and executes every last cop with extreme prejudice. Why? He was bored. 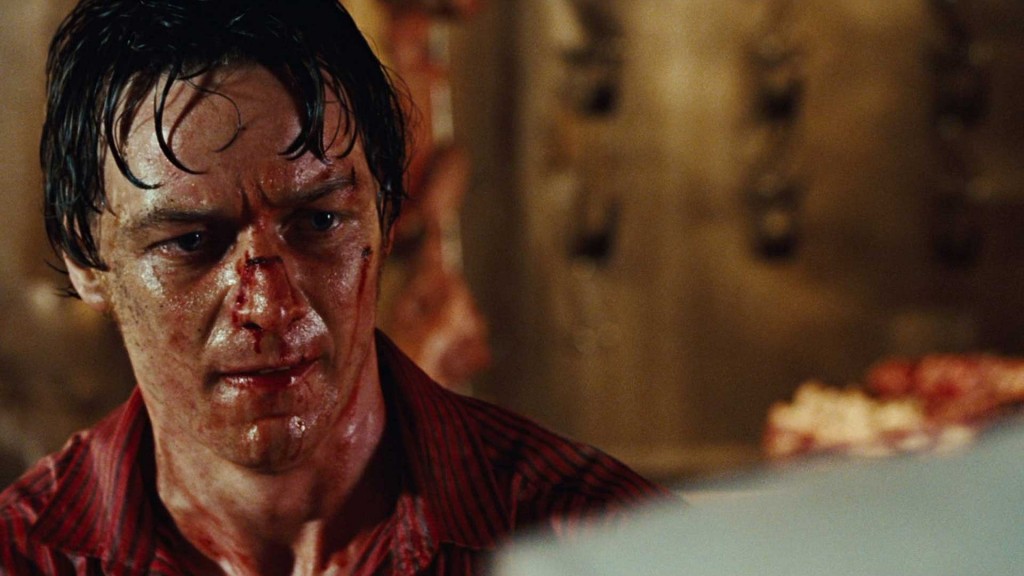 A panel from the original comic showing you just how unpleasant existentialism really is.

Now, I’m not one to revel in sadistic excess and glorified amorality. I hated both Sin City and Perfume: The Story of a Murderer (whose protagonist lacked any semblance of a conscience). But what I found so fascinating about the original Wanted was its utter willingness to sacrifice any pretense of morality in pursuit of its violent guilty pleasures. The whole premise is revolting, but it takes guts of steel to follow amorality to its natural conclusion: Freudian existentialism (where rigid definitions of ‘right’ and ‘wrong’ do not exist and man is happiest when he is instinctively pursuing his own pleasure).

The film is unwilling to go to that extreme for obvious marketing and financial reasons. A truly amoral protagonist is unpalatable – no one wants to see their heroes raping innocent civilians just for the heck of it. So instead the film manufactures justifications for its on screen violence: the assassinations are in service to the ‘greater good’ and Wesley only kills the ‘really bad guys’. Ta-da! Now you can enjoy your gore-tastic violence without the burden of having to think about what that actually implies. It’s a calculated decision that will no doubt reap dividends at the box office (Perfume, budgeted at $60 million, made a little over 2 in the US), but it’s the same cop-out nearly every other action film employs, made all the more glaring in light of the uncompromising source material. 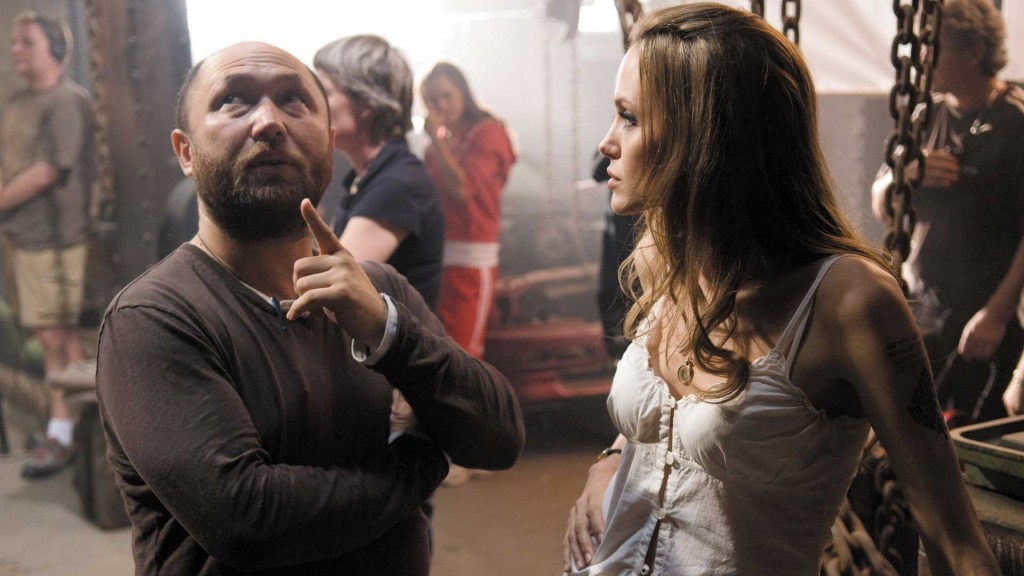 Timur Bekmambetov showing off his imagination.

It would be a disservice, however, not to mention Timur Bekmambetov’s genuine skill in crafting a thrilling action sequence. The Russian director behind Night Watch and Day Watch(the marketing insists on calling him a ‘visionary’ although I’m unwilling to go that far) brings his over-the-top aesthetic to Wanted with unrestrained enthusiasm. This is adrenaline fueled eye candy laced with crack that’s shoved straight through your retina and into your brain. Bullets mushroom against one another in midair, cars flip over one another in displays of Speed Racer-like acrobatics, and assassins leap between rooftops like trapeze artists on steroids. It’s all ludicrous, of course, but as long as you can forgive the flagrant abuses of things like gravity and physics you’ll enjoy the action-lover’s buffet that Bekmambetov is serving up.

Millar’s original work conducted a Funny Games-style experiment (albeit much more successful than Michael Haneke’s attempt) wherein you were confronted by the implications of your fascination with and enjoyment of violence: “Did you like the part where he flipped through the air and shot the bad guy in the face? Wasn’t that cool? Hey, what if he executes this innocent woman minding her own business? Still having fun?” Bekmambetov and his handlers at Universal have removed such moral quandaries because, quite frankly, they’re bad for business. Wanted is an acceptable thrill ride that many people will enjoy way more than they should, but it isn’t the uncomfortable examination of violence-obsession that it could have been. I probably wouldn’t have enjoyed a 100% faithful adaptation of the source material very much, but it would have been more interesting than what we’ve been given. 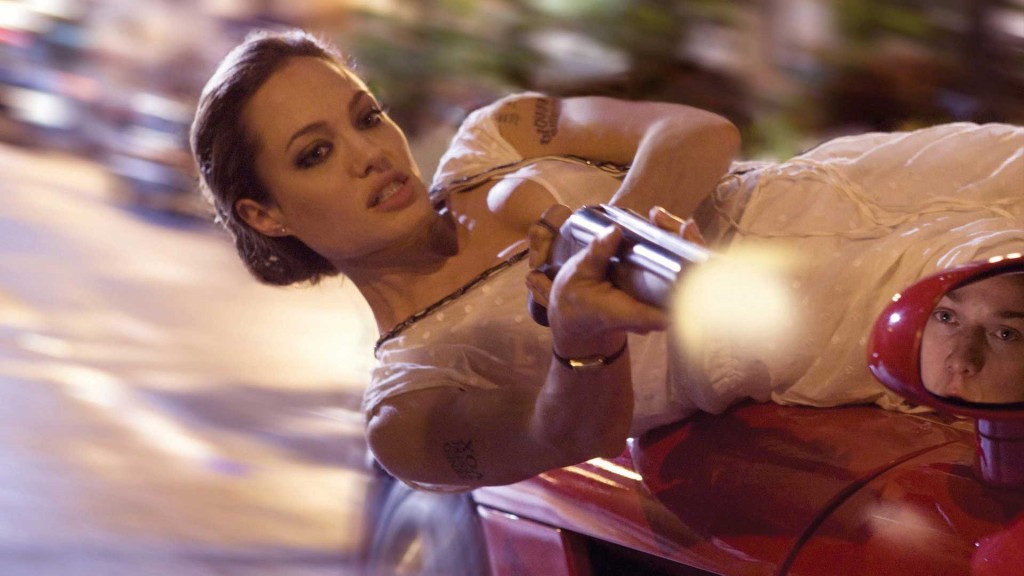 In the movie, Angelina just shoots the bad guys. In the comic, her character executes an entire coffee shop just to make a point.