There’s the usual seasonal calling for gore, off-colored humor, a cynical yet appreciative point of view, and as well, the ubiquitous cameo by a well-known, well-liked actor. 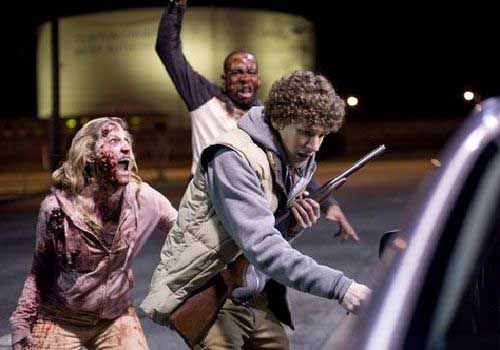 Welcome to Zombieland, where if you follow the rules laid out within the narration of the films main star — named after under-appreciated city of Columbus and played by Micheal Cera duplicate Jesse Eisenberg (there’s a metaphor in there somewhere) — you’re likely to survive. But what about rules in regard to well-balanced, well-devised scenarios amongst horror and mayhem?

It appears throughout the film, one filled with predictability and jokes that fall flat like a beheaded maniac with blood spilling from his/her mouth, that Zombieland is an overload of all things wrong with numerous renditions in regard to this particular genre.

Unlike Shaun of the Dead, which, believe it or not, consisted of a well executed plot, Zombieland focuses on the sheer shock and awe of its impressive and, disturbingly wretched makeup effects, and forgets that in order for the audience to care we must invest in the lives of its central and supporting characters.

Instead we’re thrown into what becomes a muddled, poorly crafted, and cheesy story that spoils its own value even during the opening credits. The positive, though, is Woody Harrelson — one reason this film was tolerable — as Tallahassee. His need for redemption and Twinkies becomes suitable scene-stealing fodder. 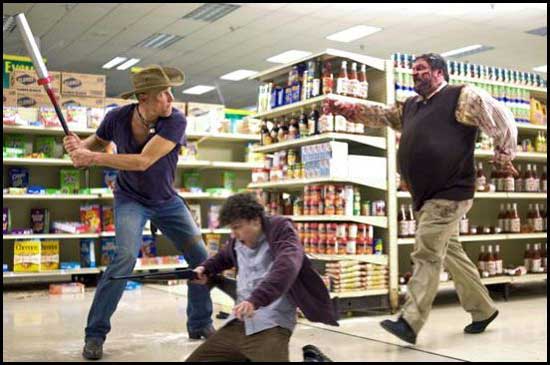 Appearances by Abigail Breslin (as “Little Rock”) and Emma Stone (as “Wichita”) provide the film with the usual balance and contrast but fail to enlighten or refresh the main character’s point of view. Simply, they seem placed in a film for the mere fact that Columbus can barely manage to free himself from his own insecurities. There’s nothing new in regard to this aspect of becoming a man.

Nonetheless, for tongue-in- cheek horror fans, Zombieland offers an escape and great makeup effects. There are a few good jokes sprinkled in, and also stunts to satisfy action buffs. So as Tallahassee would proudly put it, “It’s time to nut-up or shut up!” and see for yourself if Zombieland is worth the liters of blood spilled.

This film critic chooses to shut up.